This one is right on the cusp of being a Fans Who review. Naturally, a complete multi-Doctor extravaganza like this is going to need some impersonators, but this is almost all impersonators. Two of them - Jacob Dudman, who does the Eleventh Doctor (perfectly) and Jon Culshaw (who does the Third, Fourth and Fifth Doctors) - have performed as stand-in Doctors for Big Finish. Other than that, the only bona fide Doctor is David Bradley, who's the third First Doctor on the TV series, and since he was cast for his physical resemblance to Hartnell, he actually sounds the least like the original Doctor. Bradley's involved, of course, because this is a semi-anniversary show to tie-in with the watch-along of An Adventure in Space and Time. Did they try to get any more "real" Doctors? We know at least some of them would be up for it.

But still, this is great. The most ambitious of the Lockdown stories so far, organised by Emily Cook, with fourteen Doctors all chatting at each other in the TARDIS. At fifteen minutes, there's barely a plot, but that's not the point. This is tremendous fun. Everything from the recycled classic lines to the brilliant profile pics for each Doctor. The empty shelves of toilet paper behind the War Doctor is just hilarious. "No more," indeed. Some of the impressions are better than others, but they're all good enough to sell it. Other than the semi-official guys, Chris Walker-Thomson's Second Doctor and Jonathon Carley's War Doctor are probably the best, but everyone makes a good Doctor. James Goss knows how to write a funny Who story, and this is right up his street. Just lovely.

Watch it here and enjoy!
Posted by Daniel Tessier at 22:44 No comments: Links to this post

A Life in Pubs 4) The Marlborough Head 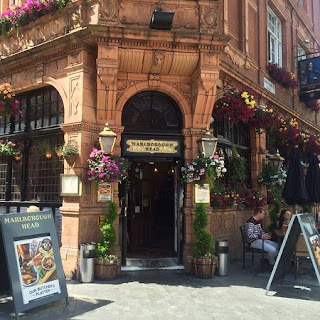 The problem with these pub experiences is that they all happened so long ago that the pubs are either gone, or they've changed so much there are no pictures of them online as they were. Somewhere I might still have some photos of nights at the Marlborough Head, but if so they're buried away somewhere.

The Marlborough Head is an old pub on the corner of North Row and North Audley Street, just off Oxford Street in central London. It was perfectly placed, almost opposite my halls of residence during my brief time at university. The pub and my home formed a handy triangle with a cashpoint and there was rarely any need to go further on a night out, unless there was an event on or we really fancied a kebab.

Apart from the perfect location, the great thing about the Marlborough was that it was part of the Eerie Pub Co, a ridiculous chain of gothic horror theme pubs. (There was another one in Nottingham called The Pit and the Pendulum, but it wasn't as good.) They might have picked the Marlborough since it was supposedly haunted by the ghosts of executed criminals, but any spirits there doubtless moved on out of embarrassment. It was filled with silly old tat like rows of test tubes filled with food colouring, fake skulls covered in fake cobwebs and that sort of nonsense. The best bit was the toilets, which were hidden behind a false bookcase with only a sign on the floor to give them away. Watching drunk people trying to find them was hilarious.

The chain did a range of cocktails called the Seven Deadly Sins, and if you drank all seven you got to pick either a free pitcher of one of them or a T-shirt. You were supposed to do them all in one night, of course, but the bar staff didn't really care, so what you had was essentially a Nero's stamp card for booze. Given that we went there almost every night, most Saturdays we could pick the last one and then get our favourite as a pitcher. Each. Plus maybe another one to kick off the collection again. If you did go for them all in one night, it was important to take the heavily cream-based Gluttony first, because drinking it on top of the others tended to result in sudden regurgitation.

I spent a lot of time in this pub with my first proper girlfriend, Amy, and often hooligans from back home. Having a pub that close to home was not conducive to studies, though.

According to the interwebs the chain went under some time ago, and the Marlborough was refurbished in 2008, so no more Deadly Sins or trick lavatories.
Posted by Daniel Tessier at 15:11 No comments: Links to this post

Who Novelisation Quest 4: "The Pirate Planet" by James Goss

"The Doctor rarely slept, and when he did, it was purely for the sheer fun of it, and the delight at the breakfast that would follow." 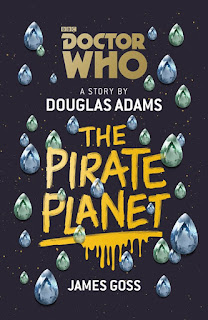 That's just one of the many delightful and captivating lines that makes this book such a joy. The phrase "Bohemian chutney" sticks in the mind as well, but then, chutney's like that.

After the success of Gareth Roberts's novelisation of Shada, the BBC looked at novelising the remaining serials that had not received the Target treatment. While Roberts would not return, James Goss stepped up, proving himself a perfect match for the silly, satirical style of Douglas Adams. It followed City of Death, my all time favourite story, the novelisation of which I approached with trepidation. Surely it couldn't live up to the original? Well, no, since so much of that serial was in the performances, but it was certainly very good.

The Pirate Planet, though, that's something else. The original is good, of course, an entertaining diversion with a clever idea at its centre, but there's the sense that Adams was trying out ideas and hadn't quite got his style down yet. The concept of a literal pirate planet, appearing throughout the galaxy to swallow up unsuspecting worlds and rob them of their resources is an ingenious one, and just one of many in the story. Add to that Adams's humour, and you've a sure fire winner.

Yet, the story's missing something on telly. Goss refines it, working, notably, from Adams's original script rather than the rewritten version that would make it to the screen (doubtless for budgetary reasons as much as anything). As such, how much of the dialogue and description is from Adams and how much from Goss is never entirely clear, and it's testament to just how perfectly the authors fit together that the join is impossible to see.

There are, of course, many deviations from the broadcast story, but this makes it seem all the more in the tradition of the Targets, the best of which shifted greatly from the televised versions. Indeed, this is quite improved over what we saw. The concepts are tightened, the humour given another draft, and everything just gels.

In this version, Romana is a wittier, cheekier version, more on the way to becoming her next incarnation, even though it is explicitly only her second day aboard the TARDIS. The Pirate Captain is a huge and terrifying cyborg, his body reeking of roasting meat, and his face hidden behind a huge, wire beard. The Mentiads, referred to as Mourners, make a great deal more sense with some further exploration. Indeed, everyone's history is explored, although it's the long-suffering Mr Fibuli who benefits the most from a third dimension. His exhausted waiting-for-god existence adds both pathos and hilarity to the scenes aboard the bridge.

Intriguingly, it's hinted that the Black Guardian himself is behind some of the events, tying the story into the Key to Time narrative better than it ever did when it was actually aired as part of it. A significant addition is the Doctor and Romana's time in the Knowhere. A very Adamsian concept, this is a torture device that assails its victims with illusory horrors, allowing the Daleks a cameo in the story. The only difference to the TV version that doesn't really work is the final cliffhanger, which, rather than having the Doctor dupe his enemies with holograms (and thus reveal a major secret of the story) sees him actually walk the plank and be rescued.

The brilliance of The Pirate Planet led the BBC to employ Goss to novelise Doctor Who and the Krikkitmen, and finally, led to the publication of Tom Baker's own lost story Scratchman, which I will finally get round to reviewing very soon. Also, Jon Culshaw's reading of the audiobook is truly exceptional, and steps it up another level again.


Data:
First published by BBC Books in 2017
Based on The Pirate Planet, first broadcast in 1978
Audiobook read by Jon Culshaw
Posted by Daniel Tessier at 20:43 No comments: Links to this post

In case the Trekkies amongst you don't know, my Star Trek book reviews are also available to read on Bernd Schneider's excellent site Ex Astris Scientia. Previously I've posted my reviews both here and on Ex Astris, but I've started doing retro reviews for Ex Astris only.

My reviews for The Higher Frontier and the Ex Astris exclusive review for TNG: Requiem have been posted here (this should lead straight to Requiem because it's only TNG classic on there, I'll post a link to the reviews index once I figure out how to link directly to a section of the page).

More to come, both new and old books up for review soon.
Posted by Daniel Tessier at 19:16 No comments: Links to this post


This is absolutely excellent. YouTube user The Confession Dial has incorporated the last moments of the Big Finish audio The Last Adventure (very much worth listening to) to footage from The Trial of a Time Lord, Time and the Rani and more to create a new regeneration scene for Colin Baker's Sixth Doctor. It's almost a shame that the lunacy of Time and the Rani has to follow it.

Spoilers for said audio adventure, of course, but there's far more to it than just the regeneration. I’d recommend listening to The Last Adventure if you haven’t. Although I imagined the Sixth Doctor looking closer to how Colin Baker looks now (after all, we saw in The Time of the Doctor that a Time Lord can revert to a youthful state just before regeneration completes).

Apropos of nothing, I now have a Tumblr. I tumbl.
Posted by Daniel Tessier at 18:59 No comments: Links to this post

Another story from the archives. Frozen in Time was written for the Nine Lives anthology published by Red Ted Books in 2017. An unofficia... 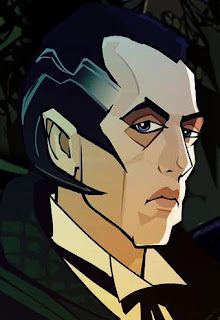