The Chibnall’s second episode of the year, and it’s another light-hearted one with some good, funny lines. It’s not as comedic as Dinosaurs on a Spaceship, although it does verge on sitcom territory in the first, mostly housebound scenes. It feels both very contemporary and quite derivative, harking back to the RTD days with its news reports and celebrity cameos (love Brian Cox’s scene), and  dropping references to Twitter and the Wii. Much like those earlier episodes, this makes it seem very up-to-the-minute, but will inevitably date it rapidly. On the other hand, the Doctor coming to stay has elements of the Craig episodes from the previous two series (The Lodger and Closing Time), while UNIT’s involvement connects to the series’ noble history. 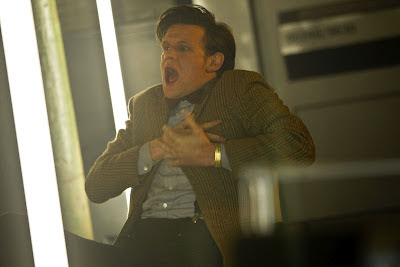 For the most part, this is a fun, solidly enjoyable episode with a great central concept. The sudden appearance of millions of small, black cubes all over the world is a wonderful sci-fi idea, and humanity’s response to it – panic mixed with curiosity, followed by complete acceptance and apathy – is probably exactly how we’d really react to such an event. There’s some wonderful character work here, leading to some of the series best laughs. Mark Williams as Brian once again steals any scene he’s in. His immediate fascination with the cubes develops into calm contemplation, first leaving him in the TARDIS for four days, alone with his thoughts, then making his daily Brian’s Log for UNIT. He provides some good laughs – “Don’t mock my log,” – but he remains the heart of the episode, the emotional support for Amy, Rory and, surprisingly, the Doctor.

The married couple are also well used, with the episode revolving around their developing life together and their gradual drifting away from the Doctor. They get to act like real people again, two ordinary Brits whose lives have been invaded by a Time Lord. While Amy gets yet another career, it’s good to see Rory back in the hospital; it seems that Chibnall is the only writer these days who remembers the guy’s a nurse. While, in the end, they elect to continue travelling with the Doctor, it’s hard to escape the feeling that they’re time with him has come to a natural end. Of course, the actual, probably distinctly unnatural end, will come next week.
Despite Amy’s claim that this is the year “the Doctor came to stay,” he actually spends very little time in the Pond household, and what little time he is there goes mostly unseen. The brief snatch we do get sees him at his most skatty, jumpy and irritable; indeed, his most “Eleventh-Doctorish.” This version of the Doctor, more than any other, needs to be kept busy and on the move, and seeing him cooped up with nothing to do, in a constant state of ants-in-his-pants, is hilarious. Not that he doesn’t get some quitter moments. While his tete-a-tete with Amy is rather beautiful, it’s his confrontation with Brian that sticks in the memory, forced to admit that, yes, sometimes his companions die on their travels. It’s pretty likely that this is foreshadowing something nasty due to occur next episode. 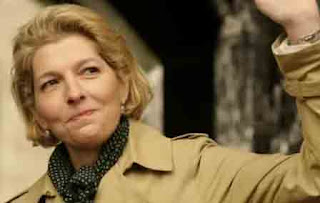 While Amy and Rory’s days on the show are numbered, and that probably means no more Brian, we do have a new character to enjoy, one who I’m sure we’ll be seeing more of. Shame on you if you didn’t spot the surname and realise that Kate Stewart was the Brigadier’s daughter, but perhaps you were just too busy enjoying such a wonderful new character. Calm, confident and controlled, our new UNIT leader provides a perfect foil to Matt Smith’s manic Doctor. Jemma Redgrave is perfectly cast, and Kate is a fine successor to the legendary Brig. I hope it won’t be too long before we see her again. 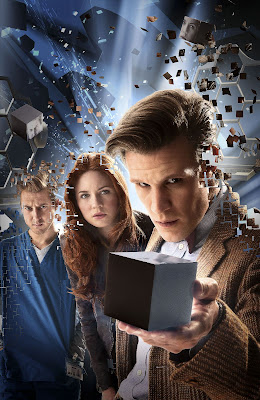 The episode is not without its flaws, though. Plot takes a definite back seat to character; not necessarily a bad thing in itself, but there’s nowhere for the story to go when it needs to get moving. While the nature of the cubes is intriguing, it isn’t enough to keep interest for long. Understandably, a monster has been inserted into the story to spice it up, but then goes completely wasted. Weird, box-mouthed ersatz nurses have all the making of a classic Doctor Who monster, but, aside from their striking, yet simple design, they’re thrown away, as is the spooky, blue-faced little girl. Once the episode reaches its final third, it loses its way completely. Steven Birkoff, as the Shakri, does his best with what he’s given, but he’s lumbered with a clichéd spacey character and left to spout gibberish. The idea that figures from Gallifreyan myth are looking to wipe out humanity before it swarms across the universe is fascinating; especially given that the Doctor once had essentially the same mission involving the Daleks. However, this too is thrown away, and instead on any illumination on the cause of all this weirdness, the Doctor waves his screwdriver and shuts the story down. It’s not the first time the sonic has solved a problem too easily, but it’s rarely been used so blatantly as a cop-out magic wand as this. I’m lost as to why the Shakri was sending robo-nurses down to kidnap people; and if there was any explanation for the astonishing coincidence of their being based at Rory’s workplace, I missed it. Perhaps Amy’s very clunky voiceover could have been cut, and some more time left for explanations. Sometimes a little exposition is a good thing!

Still, The Power of Three is two-thirds of a fine, funny episode, and one that hints at some important developments in the series future. Here’s to Kate, Brian and the Ponds.

Pond Life: Amy’s a travel journalist now. Apparently, it’s been ten years, relatively speaking, since she and Rory met the Doctor. Presumably this means since the adventure with Prisoner Zero in The Eleventh Hour, although it might mean since Amy went off with him at the end of that episode. Either way, plenty of room for some nice, long missing adventures. And I must say, they’ve both aged well.

Placement: Oddly enough, the previous episode seems to take place during this one. In A Town Called Mercy, the Doctor berates Rory for leaving his phone charger in Henry VIII’s en suite. In this episode, the Doctor and the Ponds enjoy several weeks of adventuring, including a scene in which they hide under Henry’s bed – the Doctor clutching a phone charger. Seems pretty likely that the previous episode actually takes place during this side trip, unless they’ve gone back to get the charger and protect history from the unknown consequences of Henry charging his phone.

Links and References: Kate Lethbridge-Stewart, daughter of Alastair, was a protagonist in the fanfilms Downtime and Daemos Rising, plus the novelisation of the former. Is the Kate Stewart met here meant to be the same character? There’s been no official word, as far as I know, but it seems pretty likely that Moffat and Chibnall have decided to bring the character into the TV series. This episode also features the Zygons! Only off screen, between scenes, sadly.

Title Tattle: I still think Cubed sounds better than The Power of Three.

Best Line: “I’m not running away from things, I’m running to them, before they flare and fade forever.”
Posted by Daniel Tessier at 23:10