WHO REVIEW: 7-2. Dinosaurs on a Spaceship

I love dinosaurs. I also love Doctor Who. So put them together, and you’ve got one happy Daniel.

Chris Chibnall isn’t the best regarded of Who writers by fans, but this episode showcases the best of his of his talents; writing fun, breezy romps in which spectacle and pace are everything. That said, things hold together pretty well, logic-wise, although some of the more interesting concepts are a bit confused if you think about them for a moment. The success of the episode is down to how it boldly throws together so many disparate elements, and allows characters and concepts from entirely separate genres to interact. Add in some great casting, some funny one-liners and some truly impressive visual effects (love the rock-and-bones styled Silurian spaceship), and you’ve got a fun, frothy episode. 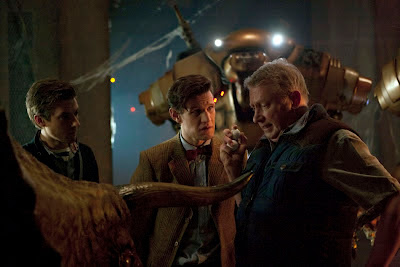 Dinosaurs on a Spaceship is an episode that doesn’t take itself too seriously, but keeps to just the right side of outright silliness. With the exception of the comedy robots – a very Hitchhikers-esque pair of characters, perfectly brought to life by Mitchell and Webb – all the cast play it perfectly straight. This isn’t an out-and-out comedy, the characters only crack jokes when someone would actually be likely to do so, but it kept me chuckling throughout. Having been given the brief of putting dinosaurs on a spaceship, Chibnall comes up with a plausible enough reason to have such a strange situation come about, tying in his previous episodes by having the Silurians involved. It’s a nice touch of continuity that gives the story some context.

The dinosaurs are very well realised. Any attempt by Doctor Who to use dinosaurs was inevitably going to raise comparisons with Primeval, and sensibly the production team decided to go for a different tone and setting here. The dinosaurs are equally up to the standard of those of the ITV show, unsurprisingly, considering that many of the same artists and technicians were involved in their creation. It’s been suggested that the dinos stand up well to comparison with Jurassic Park. This clearly isn’t the case – even nineteen years ago, a movie budget far outstrips that of a BBC TV series – but do look perfectly convincing on a TV screen. My favourite has to be Tricey the Triceratops – I do love a Triceratops – and I’m pleased to see that, despite the “no fur, no flocking, no feathers” order by the Mill, the raptors do have some feathery integuments to them. 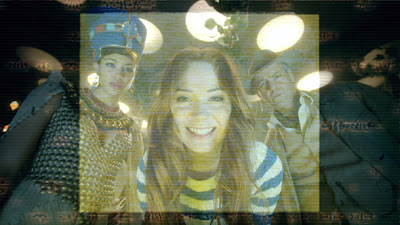 While the robots are comedy sidekicks that, in the grand tradition of villainous stooges, prove unable to shoot straight, we have a proper, hissable baddie in the form of Solomon. Perfectly brought to life by David Bradley, the avaricious space pirate is a really nasty piece of work. It’s good, sometimes, to have a villain with no redeeming features, to really contrast with the Doctor. Rupert Graves is spot on as Riddell, all clipped accent, big guns and innuendo, although it’s hard to imagine the Doctor being friends with a big game hunter, in spite of his apparent conscience when dealing with the dinosaurs. Queen Nefertiti is a less interesting character, suffering from having very little screen time in which to be explored, but she’s brought to life with haughty arrogance by Riann Steele; it’s just a shame we didn’t get a chance to know Riddell and Neffy better.

The star of the episode is undoubtedly Mark Williams as Brian. An absolutely perfect casting choice, Williams makes Brian totally believable as Rory’s dad. He does accept the bizarre situation he finds himself in a little easily, perhaps an inevitable result of the fast-pace of the episode, but the resulting change in his outlook makes it worthwhile. The shot of Brian, sitting in the doorway of the TARDIS with his thermos and sandwiches, looking out over the Earth, is beautiful. I’m glad we’ll be seeing more of him in two episodes’ time.

Among all the silliness, there are some more serious moments. Solomon comes across as genuinely threatening when he attacks Nefertiti, and the death of Tricey, gunned down by the robots, is really quite affecting, perhaps a little too upsetting for the show’s younger viewers. Notable, too, is the Doctor’s merciless punishment of Solomon:  effectively executing him by leaving him to die in his doomed spacecraft. As I said in my last review, I like it when the Doctor’s a bit of a bastard, and Solomon certainly got what was coming to him. It’s already generated some controversy, however. I find it interesting that the Doctor can dispatch as many Daleks and monsters as he likes, but if he kills a humanoid, it suddenly becomes questionable. It looks like his cold stance against the villains will be addressed in next week’s episode. It sounds like A Town Called Mercy will be a little more serious and complex, so this over-the-top romp, with its prehistoric bounty, is a very welcome forty-five minutes of undemanding fun. 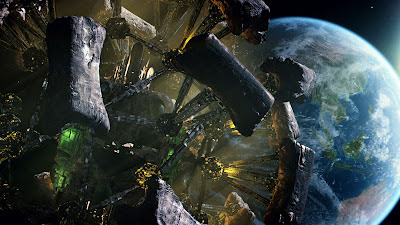 Title Tattle: Dinosaurs on a Spaceship is an obvious reference to Snakes on a Plane, and fits the tone of the episode perfectly. It should perhaps have been called Dinosaurs, Big Game Hunters, Robots and an Egyptian Queen on a Spaceship, although that would have been a bit long.

Planets visited: In 2367, the Earth is protected by the Indian Space Agency. We also learn that the Moon is home to several races, something previously unknown in the series (they’re not necessarily native to the Moon, though).

Dinosaurs (and relatives): This is the first time we’ve seen dinosaurs in the revived series; no, The Wedding of River Song doesn’t count, that only had pterosaurs. Actual dinosaurs first appeared back in Doctor Who and the Silurians in 1970, in which the Silurians had a sort of carnosaur-type creature as a guard dog. Here we see a young Tyrannosaurus rex  - previously seen in Invasion of the Dinosaurs and The Mark of the Rani – and a Triceratops – also previously seen in Invasion of the Dinosaurs. These ones are rather more convincing than the seventies versions. An unidentified raptor species also appears; they’re too large to be Velociraptor (whatever Jurassic Park may claim), perhaps Utahraptor or Achillobator. Early on we see two ankylosaurs, and the engine room is full of pterodactyls – specifically Pteranodon.

Everything we see here originates in the Cretaceous period; if the raptor is a Utahraptor and the armoured dino an Ankylosaurus, then they’re all from North America, which gives us an idea about where this specific group of Silurians lived and further clouds the matter of which time period they’re from.

Hanky-Panky in the TARDIS: Riann Steele is gorgeous, and Rupert Everett is a handsome devil, too. The costumes don’t hurt, either.

Links and References: Brian calls the Doctor Arthur C. Clarke, and the robots sing 'Daisy, Daisy' when they're shut down, a reference to 2001: A Space Oddysey.

Best Line: “What sort of man doesn’t carry a trowel?”
Posted by Daniel Tessier at 21:09