I've been following the progress of the new Dragon space capsule on its mission to the ISS, and it looks like, after a shaky start, everything is going smoothly. The mission has been a success, and according to this article, the Dragon is set to come home on Thursday. (Scroll down for a cool video of the capture of the capsule!)

This inaugural mission was designed to see if the Dragon was up to the job of servicing NASA in its space programme. Now that it's all been completed to satisfaction, SpaceX are set to service NASA with future cargo runs, and should be transporting astronauts by the end of the decade, assuming its life support systems are refined in time. The next few months will see Orbital Sciences Corp join the party with its Antares-class rocket and Cygnus-class capsule set to service the ISS as well. Not only that, but Alliant Techsystems plan to be providing their Liberty spacecraft to NASA for crew transport by 2015. Liberty is a marriage of the reliable European Araine-5 launcher, the faithful booster rockets used for decades in Space Shuttle missions and ATK's own newly-developed Liberty-type crew capsule.

With these systems servicing NASA, and Virgin Galactic edging towards the launch of the Enterprise, it looks like private corporations are the future of space travel. 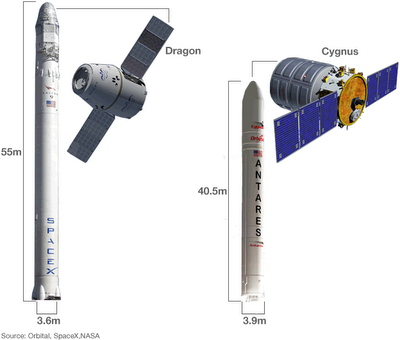