It’s difficult to review The Dark Knight Rises. Analysing the film in any detail will give away key details that would spoil the enjoyment of anyone yet to see it. Also, there’s the risk of appearing to trivialise the terrible events in Colorado, which have naturally overshadowed the film itself in the media. It’s a film about damaged people engaging in terrible acts, and people are understandably going to draw links between life and art.

Focussing on the movie, reviews I’ve read have varied from the deeply negative to the overwhelmingly positive. I thought it was excellent. Whether it matched the second instalment I’m not sure - I feel I’ll have to rewatch the trilogy to decide that. Inevitably, Rises will suffer from comparisons with its predecessor, and lacks the film-stealing turn of Heath Ledger which garnered so much critical applause. However, this means that instead of showcasing a single, stand-out actor, Rises is made up of several excellent performances by some of Hollywood’s finest.

Christian Bale is perfect here as Bruce Wayne, physically wasted, emotionally exhausted and more damaged than ever. As the depressed, isolated billionaire, he excels, and quite rightly his time in the mask is kept to a minimum. This is Bruce’s journey, not a romp for a man in a cape; if anything, it’s the occasional moment of gravel-voiced Batmannery that pulled me out of the film. It’s the man behind the mask that matters, facing not only his personal demons, but a deeply personal attack on himself and his city. What hurts Gotham hurts Bruce, and he is forced to watch his beloved city torn down around him. He begins the film closed off from those around him; when he finally opens up, letting in his new love interest, wealthy investor Miranda Tate, the Nolans’ script has the guts to punish him for it. Bruce is fighting a war on multiple fronts, from the city streets to the boardroom to his own emotional security, and by the midpoint of the film he has lost on all of them. This only serves to make his painful return all the more triumphant. 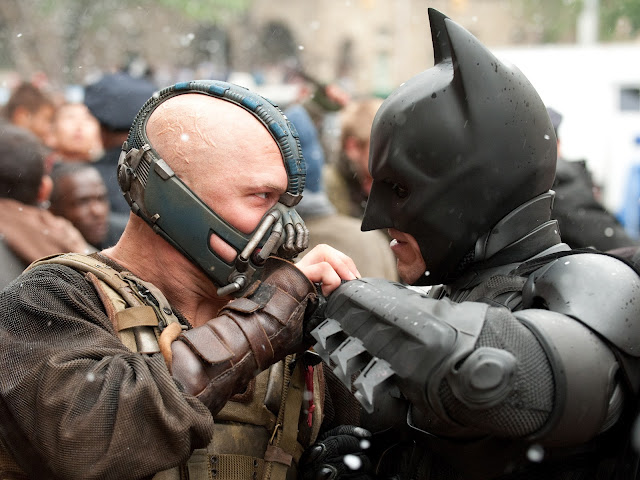 As Miranda Tate, Marion Cotillard gives us a warm, sensual but intellectually superior character, one that we can believe Bruce falling for. The final revelation as to her true character is no surprise whatsoever to those who know the DC comics lore (or anyone who happened to read spoiler-filled reports during the past six months), yet she is less convincing as a villain. Thankfully, Tate is neither the sole villain or sole love interest in the film. Anne Hathaway surprised me as Selina Kyle. I imagined her to be miscast in the role, but she is perfect, giving us a sexy, powerful character who nonetheless has a little vulnerability and a great deal of likeability. She isn’t once referred to as Catwoman - the closest we get is a newspaper headline referring to ‘the Cat,’ - but since it’s never of any doubt to anyone in the audience, this is of no matter. This new version of Catwoman stays true to her cat-burglar origins, incorporating a classic cinematic charm, plus the more modern take of the impoverished criminal who cares deeply for her own underclass, and a little of the recent movie take of the women’s avenger. It’s still entirely believable when she finally goes over to Batman’s side. It remains an entertaining take on the character without ever going over the top, and livens up an otherwise dark, grim movie. I’m not convinced by the costume, though, with its goggle-ears and stiletto heels - a little too silly for an otherwise grounded movie.

The main villain, of course, is Bane. It’s an unusual choice for a franchise that has so far mostly focussed on classic forties villains (with the exception of ‘70s creation Ra’s Al Ghul). Bane is a nineties musclehead, and in order to make him fit in this version of events, he has been made both less and more. Tom Hardy’s Bane has an intellect that other versions of the character lack, although another is pulling his strings, while the comic book version’s enhanced strength is downplayed to more believable levels. Tom Hardy does what he can under the mask, his ‘King of the Gypsies’ approach to the character proving effective, but even with redubbing his dialogue is sometimes lost and he is forced to act mostly through his eyes. He’s still a physically impressive presence (it’s hard to think that this is the same actor who was the skinny goth eight years ago in Star Trek Nemesis) and his fight with Batman is brutal and unpleasant. The moment he shatters the Bat-mask is effective, although the iconic moment where he breaks Batman’s back is shot too quickly and is almost lost in the commotion. There’s something of a problem with using this storyline for a film; whereas in the comics, Bruce’s convalescence lasted for months, here it has to fit into about an hour. No amount of dialogue about three months of criminal rule can effectively convey the passage of time.

Other, less dominant roles give us some of the finest performances. Gary Oldman remains perfect as Commissioner Gordon, a ageing man racked with guilt over his part in the ‘Dent Plan’ and the cover-up of the Two-Face events. Michael Caine just about manages to avoid slipping into self-parody as his melodramatic cockney Alfred, while Morgan Freeman is as watchable as ever as Lucius Fox. It’s Joseph Gordon-Levitt who really impresses though. Surprisingly convincing in an action role, his young police officer, John Blake, is the emotional core of the film and carries it during the periods when Bruce Wayne is kept out of the action. I won’t spoil the eventual revelation of his true name here, but if anyone hadn’t immediately guessed it, shame on them.

The supporting cast all perform their roles admirably, from Cillian Murphy’s now traditional cameo as Gideon Crane to Torchwood’s Burn Gorman in an unexpected role as a minor villain. This focus on the people of Gotham never drags the film too far into talkiness, however, with some spectacular action set pieces, some impressive tech (love the Bat aircraft) and some restrained but very successful visual effects work. The action never overshadows the dialogue or plot, and while some is over the top - the catastrophic destruction of a baseball stadium - it never goes too far or pulls it beyond credibility.

The true success of The Dark Knight Rises though is its position at the end of a trilogy. It’s rare for a third instalment of a superhero franchise to work as well as its predecessors, but Rises works despite the risk of a surfeit of characters (a familiar problem in the genre). Superhero stories (now’s not the time to argue over whether Batman is, in fact, a superhero) are rarely allowed to end. Instead, they continue, going on and on, deaths being reversed and backstories being rewritten to increase longevity. By making his take on Batman into an enclosed story, with a beginning, middle and end, Christopher Nolan has secured the success of his vision. And while the very last scene could be taken as either the true course of events or wishful thinking, this trilogy has given Bale’s Batman an effective coda. My only gripe is with the title; he should have called it Batman Ends.