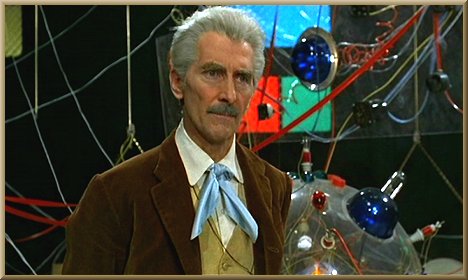 Grandad, We Love You:


Yes, Peter Cushing is getting an entry. Of course he is. OK, his version of the character exists wholly outside the continuity of the show, but so what? Cushing played Dr Who in two movies which, for decades, were the only regularly repeated Doctor Who on TV. The regular airing of these two films made them some of the most seen Doctor Who of the twentieth century, far more familiar to casual viewers than the Hartnell serials they were based on. Dr Who and the Daleks and Daleks – Invasion Earth 2150 AD are the earliest clear Doctor Who memories I have (I do have some very vague memories of watching the McCoy stories on first broadcast). It was only years later, when I got into the series proper, that I learned that they were not ‘proper’ Doctor Who.

Both of the Aaru/Amicus Dalek movies are Technicolor remakes of black-and-white serials; tartrazine-infused explosions of sound and colour aimed at a broad cinema audience. The main story beats of The Daleks and The Dalek Invasion of Earth are kept, but the plots are necessarily streamlined to cut the serials down to fit ninety minute runtimes. Comedy is brought to the fore, taking much of the edge off the originals. It’s fair to say these movies don’t have a particularly high standing in fandom, but I enjoy them. They’re simple, straightforward sci-fi for kids. Dr Who and the Daleks is tremendous fun, from the Dayglo Thals to Daleks reimagined as supreme interior decorators (check out all those lava lamps!) Daleks – Invasion Earth tones down it down somewhat, and, although it’s generally regarded as the better film, I prefer the first. The second film is certainly technically superior, but it drags in the middle. It’s naturally speedier than the original serial, but that was intended to be watched over the course of six weeks. 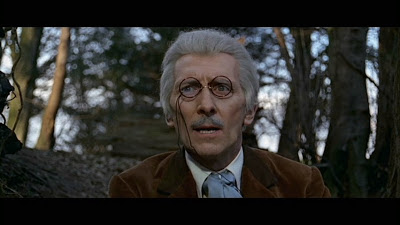 After plans for a third film based on The Chase were scrapped, Cushing never took to the screen as Dr Who again (although some of us do like to imagine the Amicus movie of At the Earth’s Core as an unofficial third instalment). He did record a pilot for a radio series that was intended to run for 52 weeks; however, this is long lost and was apparently never broadcast. (The script was reprinted in Nothing at the End of the Lane issue 2, and it doesn’t look like we’re missing much.) An abridged radio soundtrack of the second film was broadcast, however. Beyond that, Cushing’s version of Dr Who appeared in just three more officially sanctioned works: the Dell publishing American comic adaptation of Dr Who and the Daleks; DWM’s one-shot comic, ‘Daleks Versus the Martians,’ written to mark Cushing’s death in 1994; and the Hammer Horror inspired short story ‘Dr Who and the House on Oldark Moore’ in BBC Books’ apocrypha-based anthology Short Trips and Side Steps.

“It is capable of taking us to any age, on any planet, in any universe!”

There are big differences between Cushing’s Dr Who and the Doctor as we know him. Of course, it’s important to remember that, in these early days, the identity of the Doctor wasn’t as well explored as it is now. He wasn’t a Time Lord yet, and, although he was explicitly an alien in An Unearthly Child, later episodes often treated him as a perfectly ordinary elderly human. There are as many similarities between the two versions of the character as there are differences. To begin with, Cushing’s character is absolutely, definitely called Dr Who. (We never get a first name, although I like to think it was Hugh.) This marks him out as different to the Doctor straight away, but remember that the character was credited as Doctor Who/Dr Who throughout the sixties and seventies, was referred to as Doctor Who in The War Machines, and gave a host of other hints that this was really his name (or, at least, another alias).

Dr Who has two grandchildren, Susan and Barbara. Susan, or Suzie, is much younger than her televisual equivalent, but is actually a far more resourceful character – a scientific genius who rarely becomes the peril monkey that the TV Susan does. Barbara is an ordinary young woman, intelligent but unremarkable; Ian is her klutzy boyfriend. There’s not much of the original characters left there. We don’t know if Suzie and Babs share the surname Who – it depends if Dr Who is their maternal or paternal grandfather. He has at least one sibling too, since in the second film, Barbara is replaced by his niece Louise. So, rather than a single, mysterious granddaughter, this version of the Doctor has an extended family.

“In electrokinetic theory, space expands to accommodate the time necessary to encompass its dimensions.”

Like Hartnell, Cushing plays Dr Who as an old man, far beyond his own age (both actors were in their fifties during their time in the role). It’s a broad, physical performance, complete with a bow-legged stoop. Cushing’s take on Dr Who is unsubtle, but charming. He’s an old man with an evident childish streak, much like the original character. Cushing pulls it back for the sequel, perhaps in regard for the slightly more serious atmosphere. Perhaps, after a few voyages in his time machine, he’s seen things that have dented his optimism? With so little to go on, it’s fun to speculate. A with Hartnell’s Doctor, it’s explicitly claimed that he built Tardis himself (only this time it’s never retconned away). Why, though, does Dr Who build his time machine in the shape of a police box? There’s no hint that it’s due to a malfunctioning disguise mechanism – it’s just what it looks like, an unexplained frivolity. Equally, the interior of Tardis is a chaotic mess; you can imagine someone breaking their neck in an emergency landing. Admittedly, he does tidy things up a bit for the sequel.

Like the original Doctor, Dr Who dresses in a late Victorian/Edwardian manner. There’s no reason for this, no hint that he is a man out of time. He seems perfectly at home in 1960s London, and his family are certainly contemporary. Perhaps he is simply prone to dress in the manner of the gentlemen he would have seen in his childhood, or perhaps (like Cushing himself), he simply favours the Victorian style. However, we could speculate that, rather than being a native of the 1960s, Dr Who originated at the turn of the century, and set up home in his own future once he built his time machine, starting a family there. As I said, there’s room for so much speculation; unlike the ‘real’ Doctor, who started as a mystery and gradually had his background filled in, Dr Who is wholly explicable on the surface, yet remains unexplored. 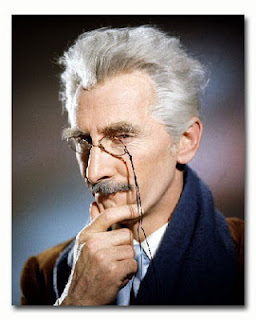 He’s capable of letting his curiosity get the better of him; note how he fakes the fluid link crisis to go explore the Dalek city, just like his forebear. It’s presented in a far less sinister light, though, more as a prank that got out of hand. For all the similarities, Cushing’s Dr Who lacks the edge of Hartnell’s Doctor. There’s no question that Dr Who is a good guy. He’s an upstanding British citizen, willing to take young policeman Tom back to foil a robbery, something it is impossible to imagine the Doctor doing. Not only would he balk at messing with history for such a minor reason, it’s hard to imagine him caring about something as trivial as a jewellery heist. For Dr Who, though, it’s just as serious as an invasion by the Daleks. That said, he displays no remorse for the Daleks when he helps wipe them out (twice!) But of course not; he’s an imperialist Englishman, and they’re nasty-looking space Nazis. They’re worse than the French.

Email ThisBlogThis!Share to TwitterShare to FacebookShare to Pinterest
Labels: Doctor by Doctor, Doctor Who, Doctor Who Classic, movies, Peter Cushing