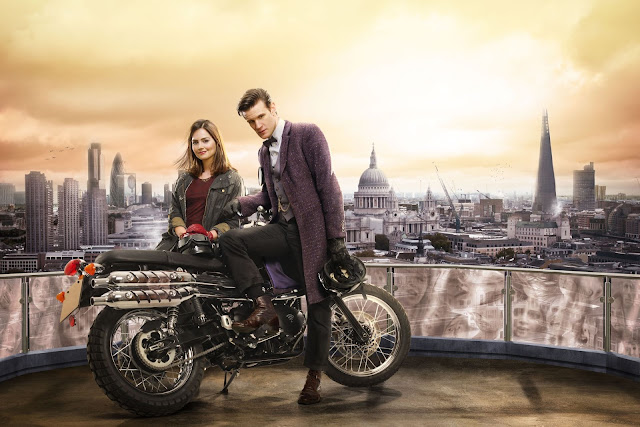 There’s a lot resting on this episode. Not only does it have to provide an exciting intro to this latest run of episodes (I’m avoiding the Series 7-b/Series 8/Season 33 argument for the moment), it has to kick of the anniversary year’s programming, and reintroduce Clara as a bona fide companion, finally moving the programme on from its three year obsession with Amy Pond. 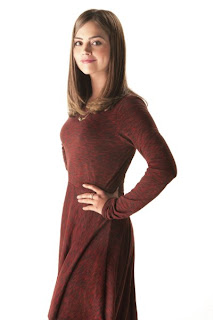 Matt Smith carries the bulk of this episode on his shoulders (somewhat broader than before, I think – has he been working out?) but it’s Jenna-Louise Coleman who has to make the best impression. Most characters get just one introduction, but Clara has had three, and each time Coleman has managed to bring something new to the table. The contemporary version of Clara is subtly different from her predecessors, a little younger, not quite as sassy and somewhat more vulnerable. It’s easy to see how she could grow into the supremely capable Oswin or the sharply witty Governess versions of the character, but here we meet a little earlier in her lifetime. She’s nonetheless recognisable as a version of the same character; flirty, adventurous and intelligent, just not quite so self-assured just yet.

With Smith on top form as a Doctor driven to the point of obsession by Clara’s mystery, the new leads make a tremendously charismatic duo. There’s an easy chemistry between them, perhaps more convincingly so than with Karen Gillan as Amy. In spite of Coleman actually being a little older than Gillan, she gives the impression of being younger, and this lends the Doctor’s protectiveness a paternal element. Which does make the flirting and ‘snogging booth’ comments a bit weird. No wonder he freaks out when she mentions it.

Of course, all this would be lost without a decent story to showcase it. Fortunately, The Bells of Saint John is the best opening episode since Smith’s debut in The Eleventh Hour three years ago. Pre-broadcast hype boasted the episode would have an urban vibe, and while that’s true to an extent, Moffat never forgets to bring the threat home to the viewer. For the first half, the episode is distinctly suburban, focussing on Clara’s own exposure to the danger in her comfortable home-from-home. Having an unknowable threat invade ones home is a classic tactic, for good reason; houses are supposed to be safe, and having something dangerous simply stride in like the walls aren’t there is unnerving.

For the first time in years, Doctor Who provides a genuinely unsettling and insightful look at the future. It’s undeniable that we live in a “wi-fi soup” as the Doctor calls it. With the never-ending march of technology seemingly continuing to pick up pace, it’s not difficult to imagine that there will come a time when human minds can be uploaded and personalities hacked. That the threat to mankind is based in the corporate world of the City is no accident; we are indeed as cattle to the consumer industry. There’s a little social commentary here on our ongoing need for the newest app and our near-permanent connectivity in modern life.

However, rather than a Steve Jobs type masterminding the affair for the sake of profit, we have a return appearance from the Great Intelligence. Although it is only one episode since it arrived back in the Doctor’s world, it has been three months, and I wonder how many casual viewers will immediately make the connection between the shadowy figure on the screen and the talking snowglobe of The Snowmen. While I guessed that the Intelligence might be behind all this, it was a stab in the dark; I wasn’t really expecting it to return, sporting the features of Richard E. Grant. Will the Intelligence be a new Big Bad for this current run, and how does this tie in to the mystery of Clara? 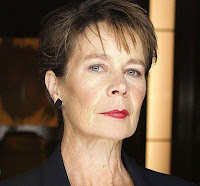 Grant’s appearance as the baddie-in-chief is little more than a cameo; it’s Celia Imrie who gets the meaty villain role. A classy thesp who was long overdue for a Who role, Imrie is perfect as the amoral but brittle Kislet. Her final scene, her mind reduced to that of the child, is beautifully played. A chilling reversal of fortune for a powerful character revealed as just another victim of the Intelligence.

The Spoonheads are reasonably effective. They’re not a classic addition to the swelling ranks of monsters, but then, they’re clearly not supposed to be. The walking base stations are there to fulfil plot functions with a little style and panache. The visual effects for them are perfectly pitched, not too showy, just enough to give some flare to what might otherwise be a slightly nebulous threat. The ranks of panicking faces behind screens in Kislet’s control room is also very effective; not unlike the similar threat of the Wire in 2006’s The Idiot’s Lantern, but more effectively pitched.

The effects are excellent throughout, in fact, combined with some top-notch direction and photography that makes watching the show in HD worthwhile at last. Not only does this series have the verve to open in a mediaeval monastery that has nothing to do with the main body of the storyline, it makes the entire sequence look gorgeous. Then, once we’re in the midst of the main story, it throws in a staggering near-crash sequence on a plane. In most series and, indeed, a blockbuster movie, this would be the central action sequence. In Doctor Who, it’s just one incident on the way, followed up by a quick jaunt on a bike to a good sit down in a café.

Title Tattle: I laughed out loud when they revealed what “the Bells of Saint John” meant. Very clever, if an odd choice of title for the episode. Has a nice ring to it though (sorry).

The Doctor’s New Clothes: The purplish look suits Matt Smith well. The tweedy frock coat and bow-tie have a hint of the Troughton look but with a more refined Pertwee aesthetic. Very retro. The Doctor’s prior outfit (I’m sorry, I will stop that) is a monk’s habit, which strangely suits him equally well. Although, apparently, monks aren’t cool. Personally, I’ve met some very cool monks.

Hanky-Panky in the TARDIS: Jenna-Louise Coleman is beautiful as ever, Matt Smith is particularly dashing in this episode, and I’ve long had a bit of a crush on Celia Imrie. Clara is a flirt, but nowhere near as much as her other two incarnations.

Links and foreshadowings: The Intelligence ratchets up a fourth appearance; honestly, nothing since 1967 and then it makes two appearances in a matter of months. 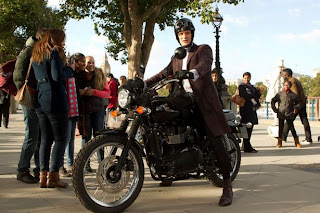 This isn't the first time we've seen the Doctor on a motorbike - he's done so in three previous incarnations. (Three in The Daemons, Seven in  Delta and the Bannermen and Eight in the TV Movie, fact fans.)

The book Summer Falls is written by one Amelia Williams, almost certainly our friend Amy. The significance is of chapter eleven – if there is any – remains to be see. Equally intriguing is that Clara was given her ‘helpline’ number by a woman at a shop. Could this be Amy? River? Or even Rose, now that we know she is returning for the 50th anniversary special?

And did anyone else briefly expect the Meddling Monk to turn up based on the 1207 sequence?

Oh, the old ones are the best…
Posted by Daniel Tessier at 22:15