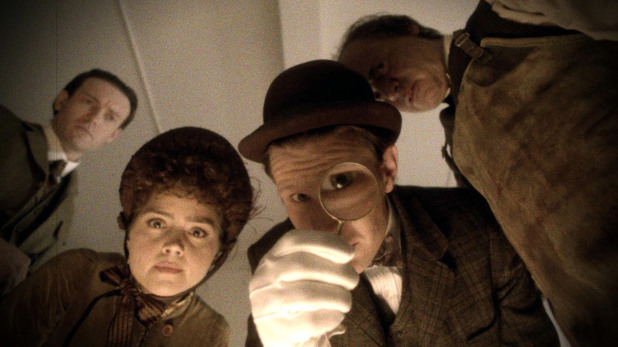 How many Victorian stories were there in 20th century Doctor Who? Off the top of my head, I can think of only Ghost Light, The Talons of Weng-Chiang and The Evil of the Daleks, which is basically two and a half. Yet since the series returned in 2005 we’ve had The Unquiet Dead, Tooth and Claw, The Next Doctor and The Snowmen, plus A Christmas Carol, which was set in a retro-Victorian future. Now it’s back to 1893 for The Crimson Horror. I’m not complaining about this, far from it’ I’m merely observing the disparity. The odd thing is that I’m sure most casual fans (which is to say, people who anally retentive enough to actually know these things, like me) would have assumed there were far more Victorian adventures in the original run than that. Even the Victorian episodes we’ve had in the new series average fewer than one per season. It just feels that the Doctor spends half his time between 1837 and 1901.

There’s a reason behind this, of course. The character of the Doctor, as originally conceived, was a Victorian fictional trope: the gentleman scientist. Following William Hartnell’s time in the TARDIS, the Doctor went through several Victorian character types: the cosmic hobo was basically a down-on-his-luck Victorian gent, the third Doctor was a Victorian aristocrat transposed to the 20th century, the fourth was a fin de siècle bohemian raconteur. Later, the fifth, six and eighth Doctors were all recognisably Victorian/Edwardian character types. The character just feels like he belongs in that era, and so it seems perfectly natural when he turns up there, even before you take his outfits into account (which made it so wonderful to see the decidedly un-Victorian ninth Doctor meet Charles Dickens).

After all the pervious forays to the period, it’s The Crimson Horror that plays the tropes of Victoriana most enthusiastically. Even Talons didn’t cram this much penny dreadful atmos into its six episodes as this story did into one. Of course, Mark Gatiss is so at home in this period that you’d think he was a century older than he really is. There’s a definite flavour of his novel The Vesuvius Club to The Crimson Horror; indeed, it wouldn’t seem amiss to see the Doctor bump into Lucifer Box. (Although Box is probably off shagging Captain Jack.) Really, though, this is off-the-peg steampunk, forty-five minutes of television revelling in the cod-Victorian stylings of this now popular genre. That’s not to denigrate it; while The Crimson Horror is neither the deepest nor most original episode, it’s hugely enjoyable.

The episode is strongest in its first act, following the peculiar investigations of the Paternoster Gang into the goings on at Sweetville. Vastra, Jenny and Strax remain the same one-joke characters that they were in their previous outings scripted by Moffat, but who cares when that one joke is still so funny? It pokes fun at the conventions of the Victorian period; it’s entirely possible to believe that society would accept a lizard woman and an extraterrestrial troll so long as they carried themselves with decorum and did what they could to fit into polite society. Even the lesbian marriage between Jenny and Vastra is believable in this context; we all know there were all sorts of perversions going on behind closed doors (not that lesbianism is a perversion, of course, but it most certainly was in the eyes of Victorian society), however, as long as they remained behind closed doors they were most often not commented on. The fact that it is also a transpecific relationship is barely worth mentioning. 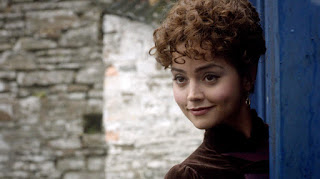 So, yes, Vastra is still the aloof leader who happens to be a lizard, Jenny is still the sexy Cockney lock-pick and Strax is still the warmongering butler, but they’re all so good in these one-note roles that it’s impossible not to enjoy them. Dan Starkey, particularly, continues to steal his every scene as Strax, particularly when he gets a telling off (“I’m going to go play with my grenades,” he sulks, when prevented from perpetrating an act of war). He’s also, amusingly, in the right in this episode; say what you will about the ethic of the Doctor associating with a violent alien sociopath, if they’d followed his advice and gone with a full frontal attack the problems at Sweetville would have been solved in no time.

It’s almost a shame when the Doctor arrives, fourteen minutes in. The episode does go a little downhill once he takes over. While I doubt that the Paternoster three have what it takes to carry a spin-off series, they could easily carry an episode, but once the Doctor arrives he does rather overwhelm the other protagonists. Also, Matt Smith doesn’t get to do anything terribly interesting with the part, mostly just relying on his, by now, well-worn quirks. That’s no fault with him, though; he’s at his best when given something meaty to get his teeth into. The only really decent scene for him is his moment comforting Ada towards the end of the episode. He puts his all into his performance as ‘the monster,’ though, and his broad Yorkshire accent is a laugh (perhaps it’s time for a Yorkshireman as the Doctor?) 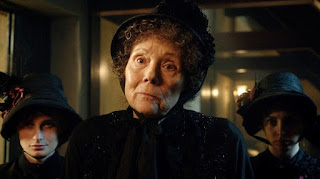 The flashback sequence, made up to look like scratchy old film, is a highlight, although it does rather show how brief the episodes have become. There’s a hell of a lot crammed in here. Some elements don’t need to be dwelled on; by the quarter hour mark, we know the monster is going to be the Doctor simply because it’s about time he showed up. On the other hand, the flashback condenses what could have been an episode’s worth of intriguing investigation into about six minutes. It’s compact plotting, I’ll give you, but sometimes a story needs room to breathe. Poor Jenna gets precious little to do as Clara. While this episode can’t be held to account for the whole series, it really is time we got to know her properly, and she really is very poorly served here. Jenna gets little to do but be plucky and look beautiful, and she’s a far better actress than the material she’s getting allows her to show. What’s more, the reunion with the Paternoster gang should allow some movement on the mystery surrounding Clara’s deaths, but this is mostly glossed over. 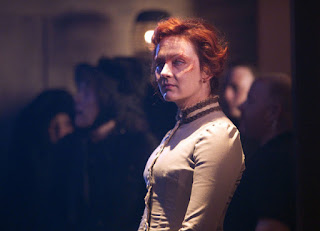 Really, though, this episode belongs to Diana Rigg and Rachel Stirling. It’s wonderful to have mother and daughter acting together at last – and how strange must it be, playing such a twisted version of your real life relationship? – but they both stand out so brilliantly on their own, with two very different performances. Rigg plays Mrs Gillyflower very broadly, but that’s just what the part needs; both actress and character look like they’re having a whale of a time with their roles. Stirling gives a completely different style of performance, a dark and touching role that buys the episode a good deal of its impact and horror. Without Rachel Stirling, this episode would have felt very light and frothy; she gives it a dark heart. It’s also interesting to see the pair of them in these roles, given that they tend to get cast as very beautiful people (unsurprisingly). Here they get to be ugly characters, a physically and emotionally damaged young woman and a truly cruel, insane old harridan.

The Crimson Horror proved to be one of the most enjoyable episodes of the season, an arch, over-the-top bit of nonsense that wisely never gives the viewer chance to dwell on how ridiculous it all is. Like pretty much every episode this year, the plot falls apart on a moment’s close examination, but when it’s as fun as this, that’s forgivable.

Title Tattle: The Crimson Horror is undoubtedly a reference to Gatiss’s favourite Doctor Who story, 1973’s The Green Death. Sadly, no one gets to say “This fellow’s bright red, apparently, and dead!”

Links and References: The Doctor mentions trying to get am Australian to Heathrow Airport, referencing Tegan from the fifth Doctor’s era. He then tops it off by almost quoting himself with “Brave heart, Clara.”

What? What? WHAT?! Just what does the Doctor do in his little locker that enables his complete recovery from the Crimson Horror and later revives Clara? I’m all for keeping technobabble to a minimum, but some sort of throwaway explanation would be nice. For that matter, how have Gillyflower and Sweet managed to create a steampunk rocket activated by a difference engine? And have the police really not been investigating the bodies washing up in the canal? 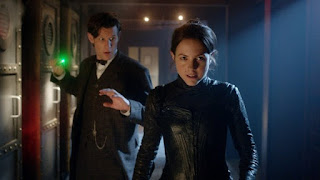 Monster, Monster, Monster! Mr Sweet is a red leech, a prehistoric leftover from the time the Silurians ruled the Earth. As usual, there’s no consistency regarding when this was: Vastra suggests it was 65 million years ago, the very end of the Cretaceous, while the Doctor refers to the Jurassic period, which lasted from roughly 200 to 145 million years ago. Mr Sweet, attached to his accomplice and providing a weird biological secretion, is reminiscent of Aylmer, the parasite in the 1988 movie Brain Damage.

Hanky-Panky in the TARDIS: Jenny’s sudden ninja moment is the sexiest thing I’ve seen on TV in ages. The Doctor would agree, judging by the look on his face (and screwdriver).

Best Line: “Kindly do not claw and slobber at my crinoline.”

Best/Worst Joke: Thomas Thomas. Oh dear me. I love it.
Posted by Daniel Tessier at 22:55

Email ThisBlogThis!Share to TwitterShare to FacebookShare to Pinterest
Labels: Doctor Who, Doctor Who New Series, Doctor Who Series 7, Eleventh Doctor