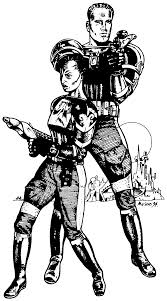 For six years in the nineties, the New Adventures were Doctor Who. There were sixty New Adventures featuring the seventh Doctor, travelling the universe with Ace, Benny, Roz and Chris. Original Sin, published in June '95, is the thirty-ninth novel in the series, and introduces Roz and Chris into the Doctor's world.

Initially, having two hardnut cops in the TARDIS seems like a terrible idea. It's the sort of butch, macho nonsense that was ubiquitous in genre works in the nineties. Oh, so gritty, so cool. Yet, somehow, Roslyn Forrestor and Christopher Cwej work far better as characters than, say, their predecessor, 'New Ace' did. Sure, they're tough, they're fighters, they're not averse to firing a blaster, but they work as characters because they actually have character, as opposed to be being the generic toughies they could have been.

Having Andy Lane create them via this novel helps of course. Now best known for his 'Young Sherlock Holmes' novels as Andrew Lane, he has a long history with Doctor Who tie-ins and spin-offs stretching back to the early NA Lucifer Rising(co-written with the equally good Jim Mortimore) and the excellent Who/Holmes crossover All-Consuming Fire. Lane has a talent for handling convoluted, mystery laden plots that balance well-written action scenes with fine characterisation. Here, he builds on the future history of the NAs that had begun with Lucifer Rising and its stablemates, creating the dystopian thirtieth century from which hale the two Adjudicators - think Megacity One's Judges, only not quite so violent.

Make no mistake, though - this is a violent novel. A wave of madness is spreading out from Earth across the Empire, its origin a mystery, its consequences bloody and horrific. This is the sort of thing the New Adventures became notorious for, but, excepting the occasional 'we're so grown-up' bit of gratuitous nastiness, this is well-written stuff that exists to further character development and plot. In this environment, where aliens from conquered worlds live on terrestrial slums, while the elite inhabit floating Overcities, it's easy to understand how both Roz and Chris became the people they are.

Roz, part of an aristocratic family of ancient, noble Xhosa stock (a nice inversion of twentieth century racial stereotyping in fiction), is an ageing Adjudicator, who has become hardened to the violence, death and corruption in the service, and is therefore reacts practically and incisively once a conspiracy at the heart of the Guild of Adjudicators is uncovered. She's already disillusioned, so hasn't far to fall. Chris, on the other hand, the square-jawed young recruit, has the idealism and the enthusiasm needed to spot the corruption in the first place. Along with their mutual, nicely understated attraction, their opposing but complimentary temperaments make them into a fine partnership. 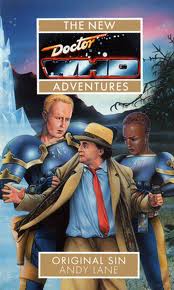 Both Roz and Cwej are illustrated on the cover and within the book by Tony Masero, but somewhat deceptively, for Cwej spends most of the novel looking like a 6'6'' teddy bear. This peculiar trait is a result of 'body bepple,' a fashionable excess popular in the late 2900s, whereby people can alter their cellular structure and temporarily take on different forms. It's a neat way of satirising the contemporary west's attitude to foreign cultures; on the future Earth, aliens are demonised, but the alien has an overpowering allure.

Original Sin is full of wonderfully bizarre images and concepts, from the space marine captain who has chosen to model himself after the Hindu god Ganesh, to the prison planet Dis, hidden inside the photosphere of a dying sun. There are downtown eateries for alien expats, patchwork planets made from lattices of different environments, an aged Empress plugged into the datacore of the Empire, disenfranchised gastropods with names like Homeless Forsaken Betrayed and Alone. It's a grand ideas book, with our heroes being dragged through a strange and unfamiliar world.

The novel never loses its focus, however, devoting equal time to the new and old regulars. Benny manages to avoid being overshadowed by the two trainee companions. By this stage, she is fully the identification figure for the reader, despite being from the future herself, by dint of being closer to us - in time and temperament - than the Adjuducators or the Doctor. The Doctor himself goes through the ringer emotionally, losing his TARDIS and foolishly entering a philosophical debate with the terrifying murderer Zebulon Pryce. He fails to win the argument, unable to justify his own dicisions regarding life and death, finally admitting that nothing gives him the right to choose who live and dies and how history unfolds. It's a sudden, sharp insight into the guilt and indecision of a character otherwise defined as 'Time's Champion.'

Perhaps most satisfying is the sudden continuity headrush in the closing chapters, whereby the identity of the mastermind behind the grand conspiracy is revealed. I shan't spoil it here, for those who haven't read the book, but if you're a fan of the classic series, it can't fail to raise a smile, while remaining perfectly consistent with the tone and content of the novel. Original Sin is one of the most straightforwardly enjoyable New Adventures in the range, and I've read most of them. Definitely worth a look if you can dig it up.
Posted by Daniel Tessier at 16:03

Email ThisBlogThis!Share to TwitterShare to FacebookShare to Pinterest
Labels: Doctor Who, Seventh Doctor, Who Book-Quest