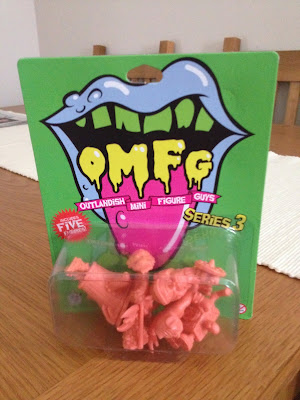 With festive timing, the third series of October Toys' OMFG has just arrived to my door. As with previous series, this latest set of Outlandish Mini-Figure Guys has been designed and sculpted by several different artists and funded by fans through KickStarter. 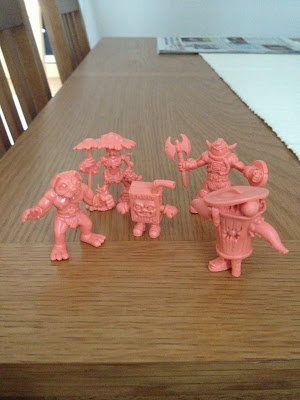 From left to right, we have:

Dr. Decay is part of Jonathan 'Bogleech' Wojcik's Mortasheen universe. The Bogleech site is full of weirdery and is worth checking out if you're a toy or cartoon nut. Wojcik talks about the eveolution of Dr. Decay from cartoon monster design to fully fledged toy here. I love the toy version, it's nicely intricate and detailed.

Pugnacious kind of reminds me of the old Monster Wrestler in My Pocket series - he's not unlike the character Bulldog Drumhead, although I think I prefer Pugnacious better. Barbarianaut, a sort of space Viking, is a good, solid figure. He's got a nice, old-fashioned minifig feel to him.

TenCan is just strange. I like it. My favourite of the set is Fruit Punch. A raving juice carton is such a ridiculous idea. He's tiny, by far the smallest figure of all three series, but I get the feeling he cold hold his own against these other monsters.

This is the standard set of OMFG in flesh colour. S3 is in a darker tone, like S1, rather than the paler S2 version. It's a nice little collection I'm building up here. Looking forward to see what S4 will bring.
Posted by Daniel Tessier at 12:49