WHO REVIEW: The Death Pit by A.L. Kennedy

Following the success of the Puffin kids' e-shorts range for the anniversary, the BBC have kicked off their own series of e-book novelettes featuring some impressive authors. There are several aspects here that are worth celebrating. For one, it's good to see the Beeb continuing Puffin's mission of signing up authors new to Doctor Who, rather than relying on the same reliable stalwarts they've used for years. It's something that has worked very well for the BBC's 'big event' novels in recent years, and it's encouraging to see them sticking with it. A big thumbs up for both Puffin and the Beeb for involving a number of female authors, underrepresented in Doctor Who and sci-fi in general over the years. Finally, this seems to be turning around. It's also good to see that the upsurge in demand for fiction featuring 'classic' Doctors during the anniversary year has convinced the BBC to commit to a continuing range featuring incarnations old and new. 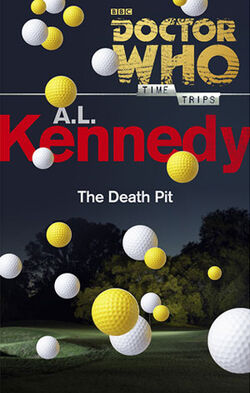 The Time Trips range kicks off with The Death Pit by dark fantasy author A.L. Kennedy. It's... peculiar. It's certainly not what I'd have expected from Kennedy, a writer who has a reputation as being rather serious, with a well-known antipathy towards "Hollywood endings." While The Death Pit has its share of cynical characters with grim personality flaws, it's a comedy piece through and through. Set on a golf course in her native Scotland, where junior secretary Bryony leads an understimulated, in desperate need of something fulfilling in her life. Bryony's witty inner voice keeps all her scenes highly enjoyable, even if her thoughts and comments are mostly jokes, rather than anything resembling what people would actually think or say.

She does work very well with the version of the Doctor presented in the story. Ostensibly, this is the fourth Doctor, although judging by the characterisation, he's more of a generically buoyant new series type. While Kennedy certainly seems to be a fan of Tom Baker's era - one major character is named David Agnew, a giveaway in-joke - she doesn't get his persona quite right, even judging it by his later, sillier stories. It's not bad, and nowhere near as off as Eion Colfer's wonky first Doctor from his Puffin short, but it does jar on occasion.

While the threat facing Bryony and the Doctor, and all who reside at Fetch Brothers Golf Spa, is inventive and unsettling, the story itself meanders, which isn't a positive in a short like this. There are also too many characters, with several having no real cause to be included, barely interacting with the story. The monster is revealed to feed on some of humanity's nastier attributes, leaving it open to a love-conquers-all-type ending which is anticlimactic. There's also a lack of closure, with the story rather fading away at the end. Perhaps some of the characters will be picked up in other instlaments, but it does this story no favours. Good fun, but heavily flawed, The Death Pit is not the best start for a new series.

Placement: The Doctor is on his own and particularly daffy, so probably between seasons fifteen and sixteen.
Posted by Daniel Tessier at 14:18