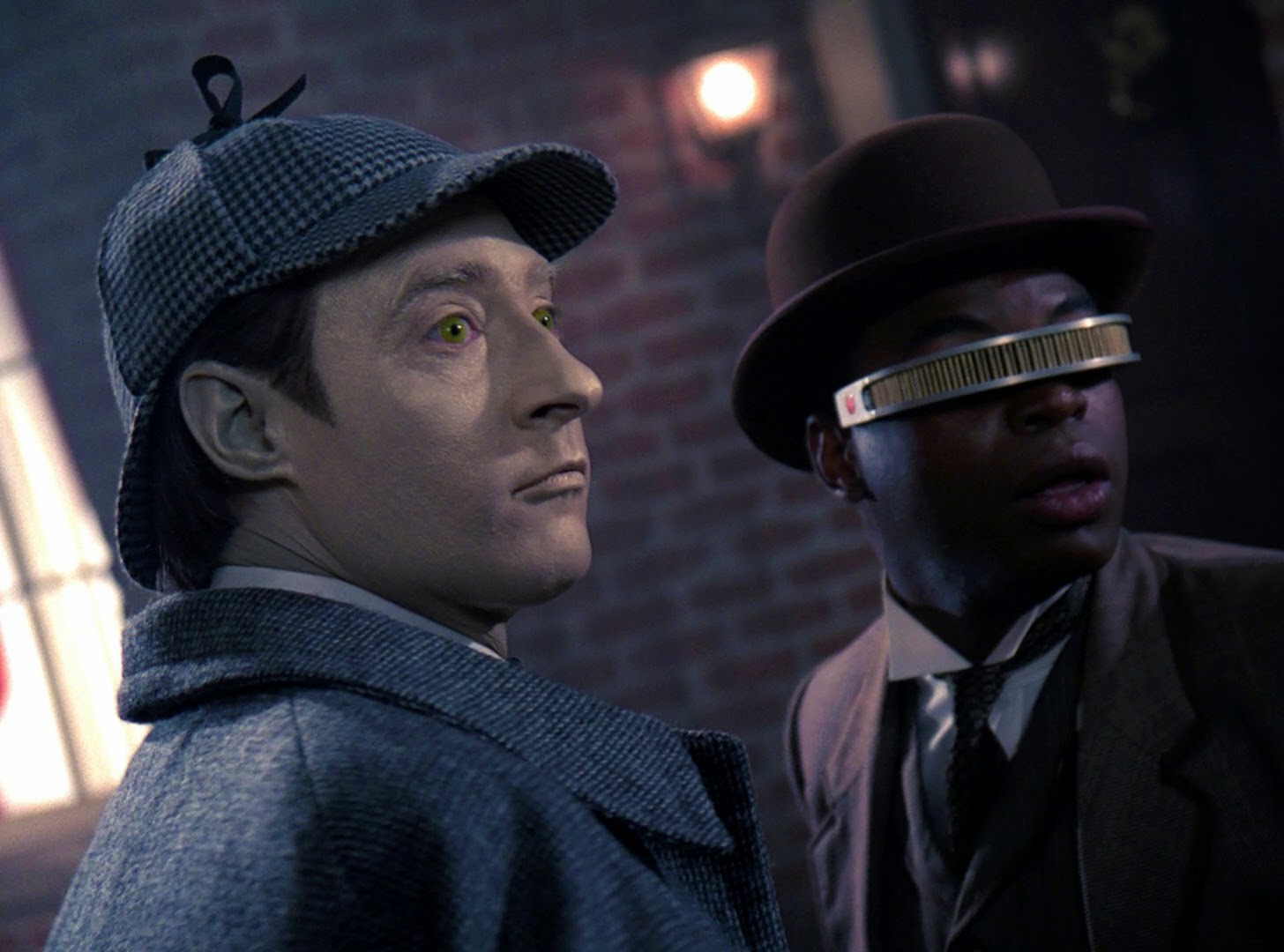 The Mission: Rendezvous with the USS Victory.


The Great Detective: Turns out that Data is a huge fan of the works of Arthur Conan Doyle and the adventures of Sherlock Holmes. He's got the entire canon in his database (but does he have the apocryphal stuff? Has he read The Seven Per Cent Solution? Would he recognise Benedict Cumberbatch, Robert Downey Jr. and that bloke off Torchwood?) Dr. Pulaski challenges him that all he can do is parrot the solutions from the original texts, or rearrange the elements in the Doyle style. Data and Geordi set out to prove that he can solve an original crime. 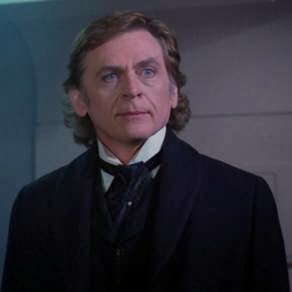 The Napoleon of Crime: Unfortunately, when Geordi asks the computer to create a villain capable of outwitting Data – not Sherlock Holmes – it increases the intelligence and self-awareness of Professor Moriarty, inadvertently creating a sentient holographic character. Initially, Moriarty is purely villainous, but moves beyond that, into a being who, quite reasonably, simply wants to be able to continue his existence.


Lady Bones: Pulaski's really not coming off very well here. Her constant belittling of Data, treating him as just a machine, bating him for being less than human, it's just – ugh. I guess it's kind of like the Spock/Bones interplay, but that was kind of racist – speciesist? - itself, and this comes across much worse. Still, Moriarty has respect for her, which is a questionable compliment.


Geordi Shore: Spends his spare time building a model of the HMS Victory, the USS Victory's namesake. (The Victory was Nelson's flagship, sailing between 1765 and 1812, and is now preserved as a museum ship in Portsmouth. Yes, I've been on it, every schoolboy in southern England has.) This whole calamity is Geordi's fault for misspeaking, but in fairness, whomever programmed the computer should really take some of the blame here.


The Picard Manoeuvre: Initially perceives Moriarty as a threat, unsurprisingly, seeing as he's taken over his ship. However, once he meets the man, he deals with him on a level basis and agree that he has a right to life, and commits to finding a way to allow him to exist outside the holodeck.


Future Treknology: So, let's get this straight: the computer is capable of accidentally spontaneously creating a sentient programme when misinterpreting an order. That's something of a design flaw, isn't it? In fact, if creating a mind is so easy, why did Soong spend years working on Data and his brethren?

Moriarty's steampunk controls for the Enterprise, all big brass levers, are gorgeous. The whole ship should look like that.


Space Bilge: The episode starts with a log entry that states that there's nothing to do but sit around and wait for the Victory to arrive. Well, that's a promising lead-in to an exciting adventure, isn't it?

Props to Picard for swearing to look for a way to help Moriarty, but rather than saving him in a file, why not just leave that holodeck running the programme? Surely they can put up with a queue for holodeck two? Or is Picard to scared of the guy to leave him running? 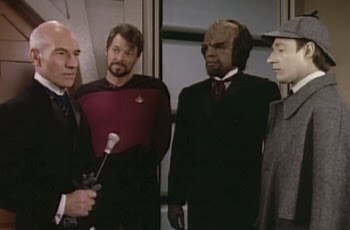 Future Fashion: Everyone dresses up to the nines for their trip to 19th century London. Data, Geordi and Pulaski look great, but Picard and Worf steal it. Seriously, Worf looks amazing in a suit. It's a shame Beverly isn't here – she'd knock 'em dead in a Victorian dress.


Trek Stars: Daniel Davis is the star of this episode, bringing charm and dignity to the role of Moriarty. He'll be back as the mastermind in the eason five episode, 'Ship in a Bottle.'

The Verdict: Not quite the classic it's made out to be, but great fun with a strong, central dilemma. Moriarty convinces as both a genuine threat to the Enterprise and an interesting character in his own right. The moment when he realises he has control over his environment, just by saying 'Arch,' is wonderful.