If you've been on the geeky pages lately, you'll no doubt be aware of the latest big announcements from Marvel. New developments in the Marvel NOW! range (still think that's a naff name) will see a new female Thor, and Sam “The Falcon” Wilson become the new Captain America. This has, predictably, caused protest and praise in roughly equal measure.

Now, we don't know precisely what form the Thor development will take. It certainly sounds like Thor Odinson will step down as the God of Thunder, and another character (established or new, we don;t know), will take over. How this will make her Thor is unclear. In the comics, Thor was originally the alter ego of Donald Blake, a human being into whom the Thunder God's spirit was placed. Nonetheless, Thor was still a distinct identity, not a title or superhero name like Captain America or Iron Man. Other characters have held the Hammer of Thor, having been found worthy, the most famous being the extraterrestrial Beta Ray Bill, who did become known as Beta Ray Thor for a time. Some of the other bearers of Mjolnir have been women. Still, it's never been a case of actually taking the place of Thor the character, so quite how this will be different is open to speculation. To quote Jason Aaron, the writer of the current volume: “This is not She-Thor. This is not Lady Thor. This is not Thorita. This is Thor.”


Gender bending popular characters is usually seen as a fan pursuit, but Marvel have actually been doing it for years. Loki was recently reborn in a female body, although he's now back to his male form. Loki has always been a very fluid character, of course. Mr Sinister was reincarnated as Miss Sinister. It's not unheard of, but rarely sticks.


The unveiling of the new Captain America has been less controversial, and received less publicity. It would have made more of a splash if Marvel had released the news before the Thor revelation, really. In any case, having a black Captain America is no bad thing at all, and has rightly been lauded in most quarters, except for the usual pro-white arseholes. Again, though, it's less of a big deal than it might seem. There have been black Caps before, including, for a short time, Sam Wilson himself. Isaiah Bradley, a black man, was the first or second Captain America, depending on how you look at his retconning into continuity. There have been a lot of Caps over the years – io9 lists most of them here, and the Marvel Database, which covers alternative timelines as well, lists even more. It wasn't all that long ago that Bucky Barnes was the one true Captain, Steve Rogers having been assassinated. However, as we all know, deaths in comics rarely last, and neither do alternative character identities.


Sometimes it's different. Carol Danvers is the current Captain Marvel, a rightly celebrated move. Captain Marvel is a title that has been held by various characters over the years, and that's just in Marvel comics (it's complicated). The current bearer of the power of Captain Universe is Tamara Devoux, an African-American woman, but about half of the major characters in the Marvel universe have been Captain Universe at some point. In the Marvel Mangaverse (Earth-2301, fact fans) Danvers is Captain America, having taken over from Rogers. In the Ultimate Comics line (Earth-1610, trivia buffs), Miles Morales is Spider-Man, and this looks set to continue, in spite of Peter Parker's return from the dead. However, these kinds of changes are rarely permanent in the mainstream Marvel continuity. The status quo usually reasserts itself before long, hence why no one can stay dead.


It won't be long before Steve Rogers is back as Captain America, and Thor is once again male. Comics rarely deviate from the status quo for long, especially with regards to the major characters. However, this may not be the case for the Marvel Cinematic Universe. Marvels' TV and film projects have, so far, done reasonably well when it comes to diversity in their main casts, but still the big star turns are white males. We've got a black Nick Fury (thanks to the Ultimate line casting Samuel L. Jackson long before the movies were on the radar). Marvel's Agents of SHIELD has a good 50/50 mix of male and female core characters, along with great guest turns from Cobie Smulders as agent Hill and Jaime Alexander as Sif. Jessica Jones and Luke Cage are both getting online series, and Hayley Atwell will be starring in an Agent Carter miniseries. So there's some good work there. Still, though, there's a long way to go. We've got a Guardians of the Galaxy movie imminent, with aliens, tree people and talking raccoons before we've had a female lead hero or one of colour. It's not that women and minority groups are particularly poorly represented in the MCU, but they aren't headlining it either. There exist scripts for both Black Widow and Runaways films, yet there are currently no plans to actually make either of these. Either of those would be a major push in the right direction. Runaways is a particular favourite of mine, and if it stuck to its comics line-up, would be predominantly female and with a good mix of ethnicities. In spite of fan hopes, there still don't appear to be plans for a Black Panther or Ms. Marvel/Captain Marvel movie. We can only hope that the new Ms. Marvel, Kamala Khan, gets a movie or series one day (it's a very good comic and I highly recommend it). On the other hand, the details recently released for Disney's new animated feature Big Hero 6 have already brought it under fire for whitewashing the character line-up. I don't know enough about the original team to comment too much on this, other than that some of the characters are mutants who are part of the X-Men property, therefore not available for use by Disney/Marvel. The film isn't part of the MCU, it would seem, and Disney are downplaying it's connection to Marvel comics. 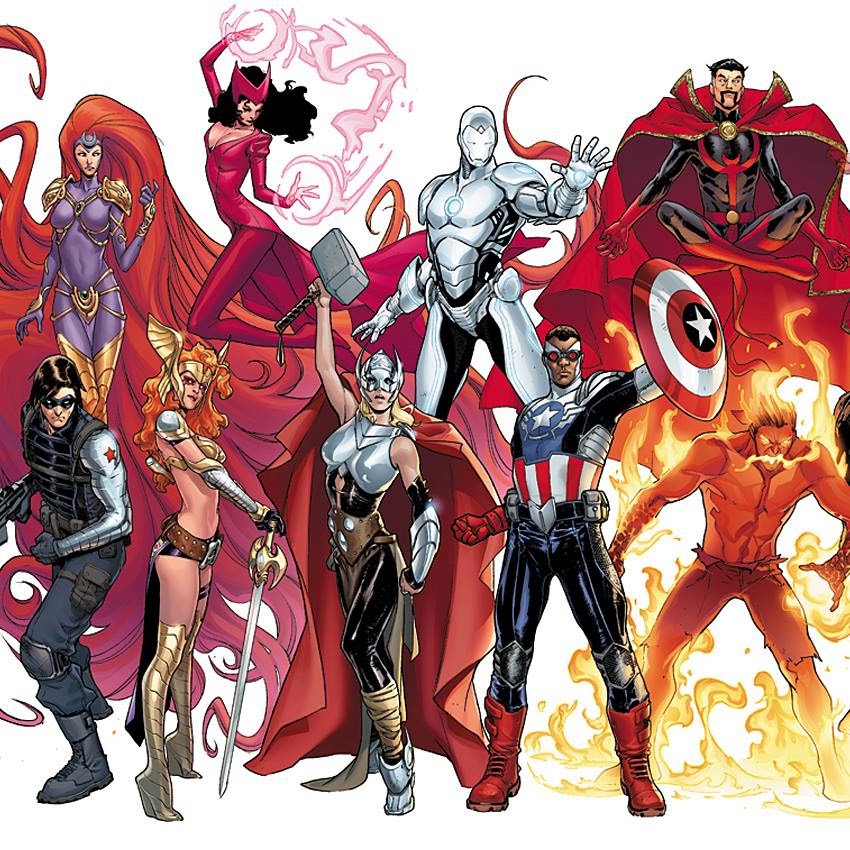 Avengers: Age of Ultron is taking a step in the right direction. With the Scarlet Witch joining the team, Black Widow will no longer be the only female Avenger. Don Cheadle as James Rhodes, the War Machine, is set to feature, and rumours have it that Anthony Mackie will be back as Sam Wilson. None of these actors will headline their own superhero feature in the immediate future, but there could be a long future for the Marvel franchise. I'd previously assumed that Bucky Barnes would take over as Captain America once Chris Evans's contract to play Steve Rogers has expired, but perhaps we could be seeing Sam Wilson donning the red, white and blue instead? Robert Downey Jr. is also coming to the end of his initial contract, so perhaps Rhodey will receive a promotion too. It's not as if black actors can't headline superhero flicks; we've had a whole trilogy of Blade films in the past. Of the predominantly male team at Marvel's film department, Joss Whedon is surely the best at writing for strong female characters, so maybe he'll push for a Carol Danvers film, or a female Thor? He's already said that he'd like Katee Sackoff for the role of the Thunder Goddess (I personally still see her as Danvers).


So, maybe one day we might have a line-up for Avengers 5 that runs like this: Don Cheadle as Iron Man, Anthony Mackie as Captain America, Katee Sackoff as Captain Marvel, Gwendoline Christie as Thor, Scarlett Johansson as the Black Widow, Djimon Hounsou as the Black Panther and Idrid Elba as Blade? An incredible cast without a white male among them.

I tell you one thing: Doctor Who is looking a bit backward now, while we still have a white male Doctor. Pull your finger out BBC.
Posted by Daniel Tessier at 13:57