Much Who. Some Marvel. Plus other bits. UPDATE: A couple more issues added on rather than start a whole other post. Titan are now publishing four Doctor Who lines, one for each of Doctors Nine to Twelve; on top of that there's the UK reprint magazine, plus Panini's Doctor Who Magazine and the BBC's own Doctor Who Adventures. That's a lot of Doctor Who comics every month. DWM is celebrating the tenth anniversary of the modern series, so it's quite appropriate that Titan also mark the occasion with the debut of their Ninth Doctor series. "Weapons of Past Destruction" is by Cavan Scott and Blair Shedd, and is terribly good. Really, quite excellent, beyond the pleasure of seeing the Nine/Rose/Jack team back again after so long. Scott absolutely nails the ninth Doctor, and this story, dealing with the fallout of the Time War, is perfect for him. It's Nine's contradictory personality, that of the wounded veteran meeting the grinning northern thrillseeker. Shedd's artwork is just wonderful, perfectly recreating the actors but never becoming stilted or photo-realist. A very fine start to the run.

Out of the others, only the Eleventh Doctor series has interested me enough to carry on. Much of "The Other Doctor" is taken from elements tried and tested in the series proper - the female companion taking the role of the Doctor, the memory watch, the gigantic TARDIS, the power of stories - but is mixed together in a new and fascinating way. The Doctor has been corrupted, by his own good intentions, becoming a sort of corporate despot - an interesting inversion of what he eventually becomes at the end of this life. Far more convincing than any previous "evil Doctor" shenanigans.

DWM's "Blood and Ice" begins a new ongoing story, with the twelfth Doctor and Clara arriving in Antarctica. There's some interesting future history, as in, genuine extrapolation of historical fact to future consequences, and while this is very much setting the scene for the story, the final image is a doozy. It's a twist that's astonishing has taken this long to happen, and particularly that it's happened in the comics rather than on screen. A good month for Doctor Who comics.

Perfectly enjoyable installments in their respective series, but nothing spectacular. Dan Slott is perfectly good at writing Spider-Man, but perhaps it's for the best that there's a shake-up coming. Latour's Spider-Gwen is the better of the two, and I'm really loving Rodriguez's artwork, but this still isn't a stand-out issue; but then, they can't all be. 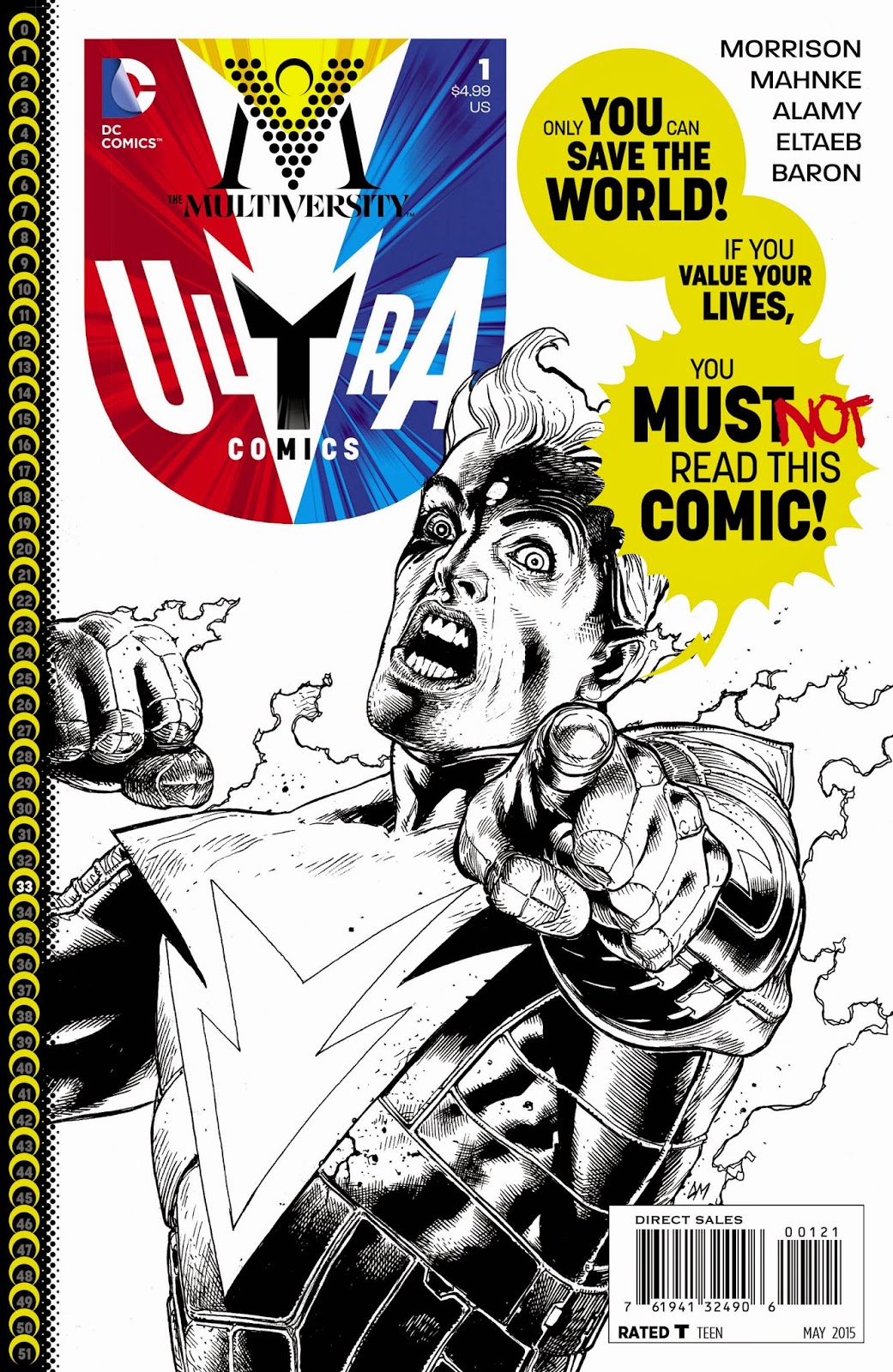 The penultimate issue of Morrison's story, and the novelty is wearing out now. This is set on Earth Prime, roughly the real world, defending itself from the multiversal incursion by creating Ultra, a new version of the super hero Ultraa, created from the very stuff of comicbooks themselves. It's kind of fun to see Ultra face off against Ultraa and various other comic beings named Ultra-this and Ultra-that, but frankly the big problem with this comics is that it's nowhere near as clever as Morrison thinks it is. The time-looped narrative, the concept of a living meme - all interesting enough, but this is Morrison himself on the project: "It's the most advanced thing I've ever done. I'm so excited about this... It's a haunted comicbook, actually, it's the most frightening thing anyone will ever read. It's actually haunted - if you read this thing, you'll become possessed." Surely he doesn't actually believe that bollocks? It's also very hard to take the idea of a sentient comicbook seriously when there's an advert every three pages.

This looked like it was going to be a heavy exposition issue, the sort that mythologically complex stories need from time to time just to make sure that everyone's keeping up. Instead, it ends with a sucker punch reveal that I really, really should have seen coming but knocked me for six. The Pantheon is complete and I'm excited to see what happens next.

Really loving this title now. Jessica Drew is a wonderfully bolshy, overconfident character, completely out of her depth running alone but determined to make it work. It's the sort of thing you usually expect from younger hero characters, and it's interesting to see a well-established character like Spider-Woman in a period of transition like this. Also, it's just generally a good fun story right now.

An excellent issue. This is all character work, focusing on Marko and his conflicting ethics, his background, his romance with Alana and the difficult choices he has to make. however, unlike some issues, this kicks the narrative into a new direction. Both sets of characters - Marko/Prince Robot and Alana/Klara/The Brand - are now set on distinct paths that should, eventually, bring them back together. Explosively. I should wager.
Posted by Daniel Tessier at 21:46