The last bits of August, the first releases of September, and a bundle of Comixology bargains that caught me up on some IDW titles I missed. Limited Marvel as Secret Wars rumbles on, before the big relaunch swallows my wallet. Everything I paid to read since the last such post, really.

An issue of Marvel comics that made it into the British news (the first since Captain America was assassinated, I think). The reason, this time, is that the villains have begun quoting David Cameron. That is, in all truth, absolutely brilliant, and show's that Al Ewing was absolutely the right choice for this title. As he cheerfully sends up his own work with 2000AD, he makes something more of the Marvel characters he's been given to play with. I didn't particularly rate his work on Captain America and the Mighty Avengers, and this is clearly why: he needs to be allowed to be British on these things. With any luck, the feedback for this title will persuade Marvel to give him a new Captain Britain series, ideally with Faiza Hussain in the title role. This is the second alt-universe story with her as the Captain, after all - it's time she took the title in the main continuity.

Arguably a pointless purchase, as I already the previous edition of this issue. On the other hand, this glossy reprint is a fun way of exploring a meeting of two favourite franchises. In spite of my childhood love of the Teenage Mutant Ninja/Hero Turtles, (and my recent binge of Turtles cartoons with my best mate), I have never massively involved myself with the universe the same way as I have with Ghostbusters, say. The commentary on this made me appreciate the story all the more, and the artwork looks even better than before.

Four part stories rarely show their strengths in their third parts, and this is no exception. There's nothing wrong with this issue, and there are some lovely moments and references for the big GB fans like me, but it's still very much an exercise in getting from set-up to climax. Meat and potatoes stuff, really. 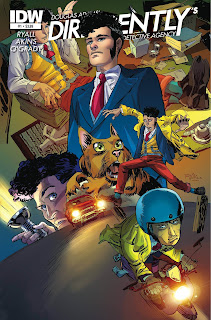 To be frank, this is rather tedious. Seifert's script is far, far too talky, comprised mostly of Martin Brundle describing his self-loathing in long, poorly written passages, interspersed with biological technobabbble (biobabble?) A story about people turning into violent fly-monsters should be more exciting than this. Also, the various scenes of cam sex, banging in corridors, descriptions of insect mating habits as they'd apply to humans... it just comes across as tacky. I'll probably grab part five just to see how it plays out, but this is nothing to write home about. Glad I waited till it was discounted.

Chris Ryall's revamp of Douglas Adams's second-greatest creation. It's definitely good value, this first episode packed with progress and dialogue. There's a lot to enjoy here, with Dirk setting up a new holistic detective agency in a mystery theme cafe in California, which mixes things up a little. There's the occasional bit of Adams-y dialogue - the "souler powered" phone stands out - but otherwise, as enjoyable as this is, it doesn't really feel like Dirk Gently.

Sadly, much weaker than the first issue. That instalment used its short length efficiently but this issue really doesn't manage to get much more than set-up done. It's irresistible to explore a wartime Constantine and Zatanna - especially as Zatanna was pin-up style in the first place  - but we get very little to go on in this very brief episode, half of which is in German. Frankly, I don't ever see the point of songs in comics - it's a mix of art media that simply doesn't work. Also, Ted Naifeh's art is frequently quite ugly here, which is a problem in a series where the sexiness of the art is a major selling point. 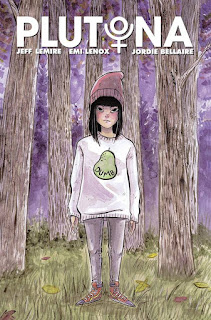 Much anticipated, a new, postmodernist superhero teen coming-of-age story. Coming-of-Golden-Age? Lemire and Lennox tell a story largely through imagery, with limited dialogue. Hard to pull off, but they manage it well, and I enjoy the idea of a world where people are well aware of superheroes and kids go "capespotting." It's a little underwhelming with this first episode, but that's probably an effect of the pre-release hype. Worth following for the four parts.

My random pick for the month, and what tremendous fun it is. This is from Comixology's open submissions selection, written by Patrick Gerard, with art by Eryck Webb. With superheroes, super-scientists, magical spaces, time travel, possible worlds, malleable physics and doorways into fictional worlds, this is absolutely packed with imaginative ideas.
Posted by Daniel Tessier at 21:54