"Only our second Issue One of the year!" proclaims the cover, happily setting the tone for the rest of the book. There's little else to say on Squirrel Girl - this carries on exactly as it would have done had none of that Secret Wars pap ever happened. Except Doreen is now a New Avenger and has access to their canteen. Ryan North brilliantly takes the piss out of the Marvel-Fox shenanigans by having it declared that Squirrel Girl is in fact not a mutant, but something slightly different and that is irrevocable and legally binding. Hilariously, at least one commentator is genuinely upset about this. Two comics featuring Squirrel Girl in one week, which is obviously marvellous. Other than that, this ticks along nicely. Evil Reed Richards and his bizarre experiments with the fabric of reality make for a peculiar and interesting threat. I like that he seems to be the only individual who is actually aware that the universe has been rebooted, having gained this knowledge from empirical observation.

Dropped back into this after missing most of it. Soviet Supergirl protecting her family and homeland, with her sister Star Girl, is basically impossible to get wrong, although this doesn't really do anything spectacular with the idea.

Doctor Who - The Eighth Doctor #1 (Titan)

The very fine George Mann's new Doctor Who comic steps back an incarnation or two to give us new adventures for the eighth Doctor, perhaps the version of the Doctor most suited to the comic format. This is a late-in-the-day Eight, but he's in a good mood, channelling the exuberance of his earlier stories. This actually feels very like the heyday of the Doctor Who Magazine strips, but with fun new ideas. Emma Vieceli's art is charming, and new companion Josie is very likeable (and gorgeous). 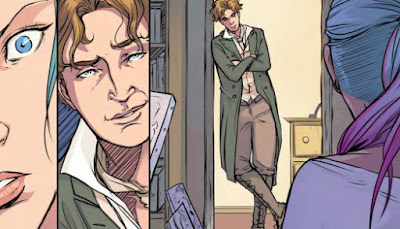 This, perhaps, is even better. Si Spurriers and Rob Williams create an intriguing tale that builds on the questions of what the Doctor did during the Time War, but at the same time, they have a spot-on grasp of the eleventh Doctor. It's a look at actions and consequences, that makes us wonder if even the Doctor knows quite what he did during the War. The Squire, seemingly his companion during some great battle, is a wonderful addition to the team; clearly damaged, not quite sane, but very loveable. Plus, Abslom Daak is in it, working better than he ever did in DWM because Spurriers and Williams absolutely refuse to take him seriously. The threat in this story - a timeless void that was once a person - is abstract but very effective, threatening to pull the Doctor's timeline apart from his first incarnation to his last.

Not what you'd expect from a Vision comic, this sees the cosmically-powered, nigh-indestructable android settle down to raise a family. The robot family is an old, careworn science fiction idea, but it has mileage, and never tires as a way to explore what it means to be human. Lyrically written by Tom King, with great art and colours by Gabriel Walta and Jordie Bellaire.

Finally, another series that has had two Issue Ones this year, one that is almost (but not quite) as silly as Squirrel Girl. Who does appear in it, albeit briefly. Howard works better as a supporting character in my opinion, but I like this, fronting a detective agency with Aunt May as his Mrs. Hudson. I also realy like his sidekick, the shapeshifter called Tara (look, I know these girls are cartoons, they're just kind of my type, OK?) Plus, an extra story, featuring, for some reason, "Gwenpool." Because, something.