A merry companion is a wagon in space, baby - and there's no better companion than Space Dandy, that Dandy guy in space. Not before time, I'm restarting my episode guide, covering the second season!

Season Two, Episode One - I Can't Be the Only One, Baby

After pulling on a cosmic string, Dandy and crew are thrown into a series of parallel universes where they meet multiple versions of themselves.

They're Dandy, Baby: The prime Dandy claims to have been a space trucker long before he hunted aliens, although he admits his memories are fuzzy. One of his many alter egos in the multiverse is (still) a space trucker, a big guy with a tan and a blond perm who has much the same outlook as the prime Dandy. He gets on a lot better with this Dandy than the first one he meets, a blue-haired show-off (even by Dandy standards) who's an incomparable alien hunter with a 100% capture rate. This version lives in what looks like a Studio Gainax/Evangelion styled universe.

Among the other millions of Dandies in the multiverse there are:

Manga Hero Dandy - an insufferable, hyperactive lunatic who screeches like Michael Jackson and appears to have stepped out of DragonBall-Z. (He rides a cloud like Sun Goku from DragonBall, or, if you're of an older vintage like me, like Monkey from Monkey, or further, all the way back to Journey to the West.) Except he's fighting the Demon King by hunting for people with star-shaped birthmarks, which seems to be a reference to the epic JoJo's Bizarre Adventure.

Mobile Suit Dandy - clearly a parody of the Gundam series, this Dandy is a pilot for a giant mecha suit.

Big Dandy - a gigantic Dandy in a hat, riffing on the Titans from Attack on Titan (but not as grotesque).

Triangle Dandy - things get weird with Dandies that aren't even vaguely humanoid appearing, including this one, which is copied from the illustration of a Master from The Tripods, as painted by Wayne Barlowe in Barlowe's Guide to Extraterrestrials.

A boy genius Dandy who is the first version who get a handle on what's going on - in fact, he expecting his alter egos to turn up.

There's also Space Inspector Dandy, She-Dandy, Bear Brick Dandy, Mascot Dandy and many others. Finally, there's the depressed Emo Dandy, who's version of QT and Meow have driven him to existential despair.

It might be significant that the first cosmic string that appears is poking out of Dandy's pompadour. 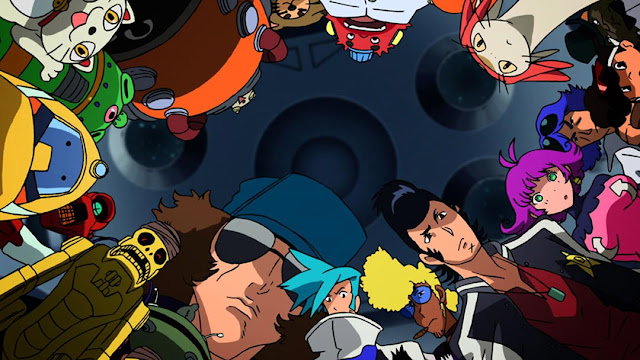 They're Not Space Cats, Baby: As with the infinite Dandies, there are infinite Meows, including, but not confined to, a giant armoured Meow (who travels with the successful alien hunter); a woman with a cat's tail (who was returned cargo of Space Trucker Dandy); a pink and blue pig, for some reason (with Manga Hero Dandy) and one who is a Schrodingerian (see below). Emo Dandy is plagued by a Meow who is a cyborg that simply repeats the same electronic mew noise over and over again.

They're Just a Little Obsolete, Baby: And thus, with QT. Most of the QTs are robots, but not all. Space Trucker Dandy's QT is green and was unlabelled cargo. Boy Genius Dandy is protected from his version of the Gogol Empire by a QT that is comprised of two gigantic robot skeletons. Finally, Emo Dandy is plagued also by a QT who is a fat old man in a pink unitard who insists he's a robot.

The Scarlet Woman, Baby: Scarlet takes exception to Dandy trying to pass of a regular cow as an alien, and takes the team aside for a chat. She suggests they try looking for a new line of work, and gives them a copy of Space Career Change magazine (naturally, most of the jobs require a degree). Frustratingly, we never get to meet any of Scarlet's alternative universe selves.

Let's Get Our Asses to BooBies, Baby: When all the Dandies arrive in one universe, they naturally all go to BooBies. Honey can tell there's something somehow Dandyish about them all, and thinks they must be siblings. Alternative Honeys include the girlfriend of the super successful Dandy (who has impressive underboobs), and one who is a ninja in the Space Ninja team. As the multiverse begins to collapse, BooBies becomes staffed by muscular hunks in tiny outfits.

There's Bad Guys Too, Baby: We briefly see the alternative versions of Dr Gel and Bea who are hunting Boy Genius Dandy. Dr Gel is an actual gorilla and Bea is a carrot.

Schrodingerians: Aliens that look like cats but have a quantum defense mechanism. They hide in a box and you can't tell if they're alive or dead until you look. Boy Genius Dandy's Meow is a Schrodingerian.

Phenomenology, Baby: A cosmic string, or dimensional fray, is a crossover point between realities in the multiverse. Every point in space is an intersection point with another point in space so cosmic strings can potentially be quite common. Unlike the string that Dandy pulled in the first episode, pulling the strings here pulls him not across space, but into alternative universes. When trying to take Boy Genius Dandy and his crew along with him, Dandy's pulling of the string causes all the Dandies met so far to appear in his own universe. More and more appear, causing the gradual collapse of causality and reality, with inconsistencies appearing everywhere. Even the Narrator is duplicated (which, given later revelations, is curious). Ultimately, Dandy repairs the multiverse by returning all Dandies to their respective realities; however, Emo Dandy is left as the star of the series.

Don't Quote Me, Baby: "I assure you, we have no intention of touching your balls."

The Bottom Line, Baby: Even for a show so full of references, this is something else. "I Can't Be the Only One, Baby" is basically made of references, and as such what I've listed above is only the start of it. Even checking my thoughts up against TV Tropes, I simply don't know enough about anime to even guess at how many shows are being parodied and referenced here. Even so, this is a tremendously fun episode, and easily a favourite. It also paves the way for the cosmic revelations concerning Dandy in the final episode.
Posted by Daniel Tessier at 19:06