After an average third episode, Red Dwarf XI serves up two belters. I'll be reviewing "Krysis" a little later after a second watch, but first, "Officer Rimmer." Rimmer episodes are always a treat - "Me^2," "Better Than Life," "Rimmerworld." OK, maybe not "Only the Good," but you get the picture. "Officer Rimmer" is another cracking episode, one which sees Rimmer finally achieve his life's (and afterlife's) ambition. Not content with being acting-advisory-senior-crewmember, Rimmer finally becomes an officer and gets to legitimise his arrogant separation from the rest of the team. 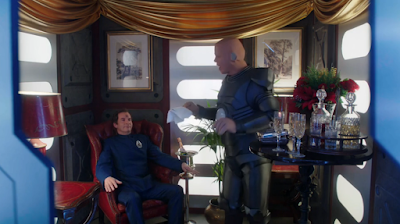 The results are hilarious, with Rimmer intentionally segregating himself from Lister and the Cat, and positioning Kryten as his personal valet. Series XI continues its obsession with Red Dwarf's lifts, introducing a scummy, barely usable service lift for the grunts, and an executive lift for Rimsey himself. Then there's the officer's club, Rimmer's attempt to set himself up in a club for people like him. Just like him...

Although Rimmer's supercilious arrogance is the core of the episode, there's a brilliant science fiction concept underpinning it. Back in the Golden Age of Science Fiction, authors wrote about the terrible consequences that could follow from teleportation. Now we know that matter transmission is almost certainly impossible, but we have developed the incredible technology of 3D printing. Considering that we are now able to print replacement organs and mechanical limbs, it's not such a huge leap to speculating about printing entire people. As such, the Nautilus and its crew compliment, kept on file until needed, is a horribly believable use of a miraculous technology.

The printer leads to some surprisingly effective body horror. The Nautilus's captain, printed with his face on the top on his head, is really disquieting, and I actually felt very uncomfortable looking at him. Rimmer then uses the printer to create endless duplicates of himself, instigating a hierarchical structure with him on top... until the printer goes wrong again and creates a horrific mash-up Rimmer Monster. After the deranged surgeon droid of "Give and Take," it's another effective turn to the dark side for the series.

This is an episode that expertly blends sci-fi, comedy and horror, but once again, one that has far too much material for its runtime. The bioprinter is a fascinating concept with huge scope for further exploration. The ethical and philosophical consequences could power a whole series of programmes. There's a brilliant moment where we learn that Lister sold his genome, and that his duplicates have been manning call centres for years. It's one of the best bits of the episode, but again, it's just a moment, where it could be the basis for a full episode. And, as with the first two episodes of the run, it just stops. In fact, it's the worst example so far, with the episode being cut off mid-battle. I can only assume both time and money ran out, and the climactic destruction of the Rimmer Monster was just too expensive to show. It's a major flaw that prevents "Officer Rimmer" from being a five star episode.

Continuity bollocks: As with previous episodes this year, "Officer Rimmer" harks back to the early days of the series. Kryten mentions previous occasions where having more than one Rimmer hasn't gone well, but Rimmer Prime brushes it off, saying there'll be lots of him this time. Sure, "Me^2" was one-on-one Rimsey war, but has he forgottent the entire planet of his clones in "Rimmerworld," where ended up in a dungeon for 557 years? At least he still remembers to always carry a pen.

There's a definite sense that lately Red Dwarf has been moving back into the populated area of space, which makes sense if they've been travelling back towards Earth all this time. We're meeting multiple ships on deep space missions, including the Nautilus, the Nova 3 and the SS Samsara. We also get a little more information about the Space Corps rank system. The lowest officer rank is simply called Officer, with First Lieutenant considerably higher.