Supergirl manages to present a surprisingly deep and intelligent episode about integration and discrimination, while still running lines like "I picked a bad time to get rid of all my kryptonite!" This is an extremely busy episode, marking the point where the series really seems to be kicking into high gear, throwing in all sorts of ongoing developments and new characters. We have the refugee alien (Chris Wood) waking up and eventually being revealed as not Kryptonian after all, but the last child of Daxam, Mon-El. We have the first appearance of President Marsdin, played by the legendary Lynda Carter, introducing the Alien Amnesty Act. We have the introduction of Maggie Sawyer (Floriana Lima) as a new recurring character for the series. And, right at the last moment, we have the reveal of M'gann M'orzz, aka Miss Martian.

So, taking each element at a time... I initially assumed that Wood's character was going to be Superboy, the variant of the character as a clone of Superman, and that this would lead back to anti-alien group Cadmus. This was obviously totally wrong, but the script has fun with the obvious inference that the super-strong guy in a Kryptonian pod is a Kryptonian. Instead, by making him Mon-El, we get an unexpected strand dealing with Kara's own prejudice against the people of Daxam, here presented as the sister world of Krypton. It's an interesting direction to take, with Kara's usual inclusive nature, exemplified by her fighting for the Alien Amnesty Act, at odds with her initial unwillingness to see Mon-El as anything but an undesirable element. Wood's natural charm and likeability makes Kara seem even more unreasonable in this regard, and he is initially more accepting of her than she is of him, even if it's a fine line. 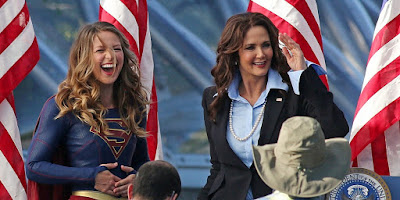 It's heartbreaking watching this episode after the appalling result of the US election. The script is, if not exactly pro-Clinton, profoundly anti-Trump. "Who even voted for that other guy?" asks Kara, rhetorically, and the answer is, nearly half of America. God, it's depressing. Fortunately, we have Lynda Carter charming the pants off everyone present as President Marsdin to make it all much more bearable. Plus, two blatant and beautifully on-the-nose references to Wonder Woman ("You should see my other jet"? But it's invisible!) In a country where "alien" is still frequently used to mean "foreign immigrant," an episode championing alien integration into society is a profoundly left-wing statement. Such a pity more of America don't see things that way.

Maggie Sawyer is a welcoem edition to the cast of characters, and Lima is extremely likeable in the role. It's a different take on her character, making her part of an alternative cultural movement that accepts aliens in society, but the core elements are the same. She's a tough cop who is proudly out, and this is always good to see on TV. Her relationship with Alex begins with the most cliched Feds-vs-State cop rivalry dialogue I've heard this side of 2000, but it's essentially a meet-cute. The two characters are clearly being set up for a romance and I can't wait to see how it develops.

Finally, Miss Martian... well, we'll have to see how that one develops. Needless to say, it changes things considerably for Jonn Jonnz. I'm all for the inclusion of more aliens in the series, particularly less humanoid ones. I've said since season one that the series would be at its best going down a more Men in Black type of storyline, with lots of peculiar creatures and out-there weaponry, rubbing shoulders with everyday America. While it's a bit of a continuity snarl (so, everyday Americans know there are aliens livign amongst them now?), I think it really works for the series and adds something different to the mix, making it stand out more against the, largely alien-free, Arrowverse series. Plus, we get what's basically a low budget Cantina scene, only with lesbian cops, which can only be described as a good thing.

Along with all this, there's some more interesting developments in the friendship between Kara and Lana Luthor (Katie McGrath). We all know she's going to turn out to be a wrong 'un, but it's entertaining watching how far it will run before the characters are at odds. Among the male characters, Winn is far more successful a character working at the DEO, but James is just as dull as the unlikely new head of CatCo. At least we have Snapper Carr (Ian Gomez) to make CatCo life intersting, even if his brand of hard-boiled journalism seems to have stepped in from another show entirely. The episode was rather finely directed by Rachel Talalay, who has previously directed an episode each of The Flash and Legends of Tomorrow. She also directed the season closures for the last two runs of Doctor Who, and I'm excited to read she'll be kicking off the next series of Sherlock. Overall, a busy, fun and successful episode. 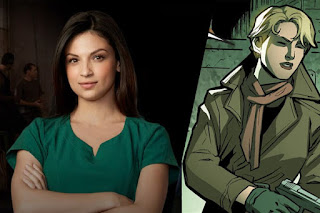 Detective Sawyer is a character I am very pleased to see join the roster. Sawyer is a character who has been a major part of both Superman and Batman mythos for the last thirty years, making her first appearance in Superman #4 in 1987. Part of a special unit that handles metahuman crimes, Sawyer represented the police force's response to alien and transhuman threats, opposed to vigilantes like Superman and Batman. Over time, Sawyer came to value the superhero role and worked well with Superman to protect Metropolis. In Action Comics #600, she made an enemy of Lex Luthor after she threatened to expose his illegal activities. Maggie was married to James Sawyer, a fellow officer, but later questioned her sexuality, becoming one of the few major LGBT characters in 20th century comics. Luthor threatened to out her as gay, but this eventually led to Sawyer accepting her sexuality and going public.

In the 2000s, Sawyer transferred to the Gotham City Police Department and worked her way up the ranks to become Commissioner, albeit briefly, in Jim Gordon's absence. Sawyer met Kate Kane, aka Batwoman, in Detective Comics #856, a significant moment that would led the two characters to begin a romance. Kane eventually proposed to Sawyer in the 2011 Batwoman title, Alongside Renee Montoya, Kane and Sawyer became the most high profile lesbian characters in comics. Unfortunately, DC dropped the ball by refusing to allow the actual marriage of Kane and Sawyer go ahead. Amid the controversy, head writers of the series quit the comic in protest to DC's corporate decision.

Maggie Swayer has previously been seen on live-action TV in the latter seasons of Smallville, played by Jill Teed. The castin go Floriana Lima in the role on Supergirl adds a new dimension to the character by being, in her words, "non-white, non-straight," making her particularly well-placed to understand discrimination in the USA.
Posted by Daniel Tessier at 11:04