The Force Awakens was a thoroughly enjoyable new episode, it was inarguably derivative of the original Star Wars. Rogue One, on the other hand, while being literally derived from A New Hope's backstory, feels considerably fresher. Although a prequel, it's far more its own thing than The Force Awakens managed to be.

It's easy to be sniffy when it comes to the now expanding roster of Star Wars productions, with this the first of what promises to be many "Star Wars Stories." Of course Disney are going to milk the property for all its worth, but really, is that a bad thing? The original trilogy is one of the most beloved film series of all time, and while the prequel trilogy has left many fans fearful of tainting it, there is so much scope for further exploration. It's a whole galaxy, after all, and the films and TV series so far have only scratched the surface of that.

The triumph of Rogue One lies in its embracing of new characters who are not linked to the Skywalker-Solo dynasty that has dominated each of the main episodes. While there are some remarkable characters, they nonetheless come across as relatively ordinary people, pushed to extremes by the terrifying situation they find themselves in. Luke was destined to become the first in a new generation of Jedi, while Leia was already a princess and an interstellar ambassador ebfore getting involved in the Rebellion. Sure, Han Solo was just some scruffy nerf herder, but even he had a mythic quality, one that has led to his character holding legendary status come Episode VII. The closest Rogue One has to this is Donnie Yen's character, Imwe, a Guardian of the Wills; sort of a wannabe Jedi who wields the Force but is apart from the eternal Jedi/Sith battle. The remaining characters all just want to get on with their lives, drawn into the Rebel-Empire conflict with varying degrees of unwillingness. 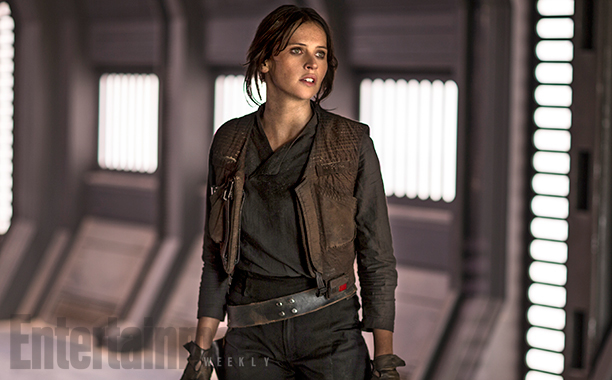 Jyn Erso is a case in point. Felicity Jones has rather a tough time convincing us who her character is supposed to be, but this, I feel, is more due to the last minute rewrites and reshoots which saw the film change quite considerably before its final release. Early trailers for the film included a number of now-excised shots, and portrayed Erso very much as a reluctant hero, fighting for the Rebellion purely from necessity. In the finished product, she transitions from the reluctant fighter to the hero of the Rebellion with jarring suddenness. Not that this unbelievable, but it could have been portrayed more fluidly. Nonetheless, Jones portrays Erso with charisma and resolve from her almost-broken beginnings to her heroic ending, and it's a pity we'll not get to see her in the role again. It's unlikely she'll ever reach the legendary status of the quite similar Han Solo.

Diego Luna is equally watchable and heroic as Cassian Andor, the captain of Rogue One and the secondary hero of the film. Unlike The Force Awakens, which presented Rey and Finn as dual leads, equally as important, Rogue One is very much Erso's film, with Andor as her support, something that the more aggressively masculine corners of the internet couldn't accept. Some of these actually argue that a woman in space is unrealistic, somehow ignoring the numerous actual women who have completed missions in space, as wellas the fact that this is a series about warrior-wizards with magic ruddy swords. I hope the next Story they announce is a lesbian romance with no male characters except Jabba the Hutt.

The central trio is completed by K-2SO, brought to sardonic life by Alan Tudyk, and undoubtedly my favourite character of the film. Frankly, this reprogrammed Imperial troop who cannot keep his trap shut is far more entertaining than C-3PO or R2-D2 ever were (although the old droids do turn up in Rogue One, since they are obligatory for every Star Wars film). Bring him back. Save his personality chip. Reprogramme another one, I don't mind.

The secret hero of the film is Galen Erso, Jyn's father and the mastermind behind the Death Star. Played by the mesmeric Mads Mikkelsen, who finally gets to portray someone other than an out-and-out villain, he's one of the most interesting characters in the film. His presence also clears up one of the most annoying elements of the original Star Wars, which is to say, the great big hole in the Deatn Star that's perfect for firing torpedoes directly into the engine core. By simply making this a deliberately engineered weakness, designed to stick two fingers up to the Empire, Galen Erso makes the original film a more coherent story in retrospect.

Disney's new Star Wars universe shucks off the gigantic Expanded Universe of supplementary material that it had accrued over the years, which has upset some fans and galvanised others. I've never been into Star Wars enough to be invested in the expanded material (it's always been Trek and Who for me), but it's surely a good thing to have the universe opened up like this for exploration. There is still, of course, plenty of canonical material to be mined. I'm sure to notice lots of little winks once I finally get round to watching Rebels, while I didn't realise the significance of Saw Gerrera, and just wondwered why Forest Whitaker had so little screentime compared to what the trailers suggested. I enjoyed the many nods to the earlier films, although quite how those two alien ne'erdowells found their way from Jedha to Tatooine without getting blown up, in time to meet Obi-Wan and Luke, what, a week later? But then, we have Darth Vader, voiced once again by James Earl Jones. He's used with commendable restraint, which maximise the impact of his scenes, although he really should realise that if he wants to destroy something on a spaceship, shooting the ship down and blowing up would probably work better than boarding said ship and stalking malevolently through it.

The most contentious aspect of the film is, undoubtedly, the use of CGI actors to recreate characters from A New Hope. It's a open question whether it's respectful to recreate a deceased actor, but in terms of its effectiveness, I think the CGI Peter Cushing/Grand Moff Tarkin worked astonishingly well. Yes, you can see he's CG, but only just. It's remarkably life-like, and Guy Henry provides a very good vocal performance. The story wouldn't work anywhere near as well without Tarkin's involvement, and his rivalry with Krennic (a great performance by Ben Mendelsohn) adds a lot of flavour to the Imperial scenes. I did feel that Tarkin came across as more moodily vindictive than his original, coldly monstrous self. This is the only guy who ever told Vader to stand down. You shouldn't see a flicker on that face.

The ending of the film is powerful, bravely going down thn the Blakes 7 "everybody dies" route. It is a war movie, after all, and the sacrifices of the characters hammer home the significance of the battle they've fought. Finally, the film segues directly into A New Hope, ending immediatley before the original's first scene. I can't wait to get this on disc and watch them back-to-back. The last thing we see is Leia, CGI'd the same way as Tarkin. Somehow, she's not quite as convincing (probably because a gaunt, wrinkly face hides the joins better than a smooth, youthful), but her appearance is fleeting, so it works. It's heartbreaking, though, to watch it now, after the incredibly sad loss of both Carrie Fisher and her mother, Debbie Reynolds. (We can take some comfort from the fact that Fisher has already shot her scenes for Episode VIII, but still.)

Controversial matters aside, Rogue One works, striking out in a somewhat new direction for the franchise while still feeling 100% Star Wars. A triumph.
Posted by Daniel Tessier at 17:45