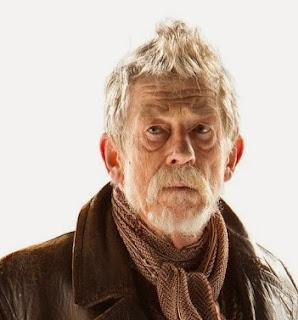 Britain has lost one of its most remarkable and respected actors. Sir John Hurt has died, aged 77, following an ongoing battle with pancreatic cancer. While he previously announced that he was in remission, pancreatic cancer is a particularly vicious form of the disease and it would seem that it has now taken him.

John Hurt was one of the most beloved actors of his generation, instantly recognisable by his distinctive voice, which only grew more gravelly and cultured with age. His presence added an element of class to even the most beleaguered production - even Indiana Jones and the Curse of the Crystal Skull was improved by his involvement. Over the course of fifty-five years, Hurt appeared in over a hundred films, including some of the most respected and influential in British and Hollywood history.

I'm not alone in citing his performance as John Merrick as a personal highlight in this long career. Although quite loosely based on the life of the real Joseph Merrick, David Lynch's The Elephant Man (1980) is a truly powerful and moving film, that hinges on Hurt's incredible performance. Being able to deliver such pathos and heart while so buried in make-up is a testement to his skills as an actor. It's clearly a role that made an impact of him. Hurt later became patron of the Proteus Syndrome Foundation, which researches into the rare condition that Merrick is thought to have suffered from, and also Project Harar, which supports children living wtih disfigurement in Africa.

Hurt revealed the hardship of his childhood later in life, having been brought up in a strictly religious household, and also abused at school. Although his mother had been an actress, he was banned from visiting the cinema as a boy. Nonetheless, he developed ambitions to become an actor, something that was, as seems to be traditional, poo-pooed by his schoolmasters. Nonetheless, he proceeded to art school, and won a scholarship to RADA in 1960. His first film role, in The Wild and the Willing, followed in 1962.

Over the years Hurt took on some of the greatest roles in film and television. He was Quentin Crisp in The Naked Civil Servant (1975) and its latter-day sequel. He became the first victim of the eponymous creature in Alien (1979), in one of the greatest and most shocking scenes in cinem history. He appeared in such acclaimed films as Midnight Express (1978), for which he won a BAFTA and a Golden Globe, The Field (1990) and Contact (1997). One of his most celebrated roles was as Winston Smith in the film adaptation of Nineteen Eighty-Four, released in its eponymous year. Years later, as something of a counterpoint, he played the High Chancellor in the film of Alan Moore's V for Vendetta (2006).

Hurt lent his vocal talents to numerous animated productions. Some will remember his performance in the, frankly terrifying, 1978 adaptation of Watership Down, others for the same year's animated version of The Lord of the Rings. He voiced the Horned King, the monstrous villain of the underrated Disney epic The Black Cauldron (1985), while people of more recent childhood's may recognise his voice best from his role as the dragon in the BBC series Merlin.

Hurt was one actor I was always desperate to see play the Doctor. I felt that, if ever there was a modern Doctor Who movie, then he would be the perfect choice for the role. In 2013, for the series' fiftieth anniversary, he was drafted in to play the War Doctor, a previously unknown, secret incarnation of the Time Lord, and was absolutely, utterly perfect in the role. In the last couple of years, Hurt has returned to the role on audio, for Big Finish Productions.

John Hurt is one of those rare celebrities who no one seems to have a bad word against. An absolute treasure. He will be missed.