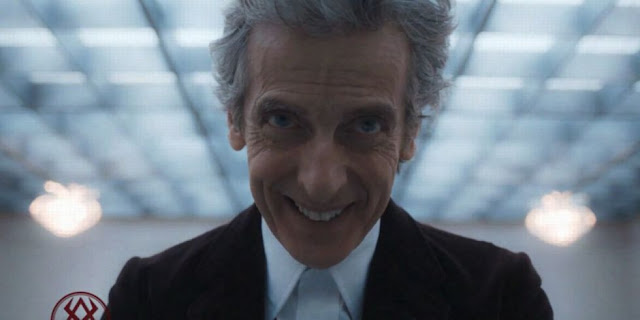 The final installment of the Monks Trilogy looks set to be a genuinely interesting bit of science fiction until about twenty minutes in. "You're stagnating," says the Doctor. "In fact, you're regressing." So it goes for the episode itself, which singularly fails to make the most of its many promising elements.

To begin with, it's 1984 all over again, with memory crimes as a thin cover version of thought crimes and the Doctor himself taking up the Big Brother position. The Monks have completely duped the human race into believing that they've lived alongside them as watchful guardians for the last however many millennia, and only a very few are (somehow) aware of the truth. In the era of fake news and alternative facts, it's a decent attempt at satire. Although, the situation presented, with a small group staying in power by peddling an obviously false history and violently crushing any voices of dissent sounds more like religion than any political regime currently in the headlines (although there are plenty of countries, such as Saudi Arabia and, increasingly, the United States, where the line between politics and religion has disappeared).

Pearl Mackie earns her keep on this episode alone, delivering a heart-wrenchingly strong performance as Bill clings onto her reality ever more desperately. She really is exceptional when given strong material to work with, and her horrified reaction to the Doctor's betrayal is only bettered by her stoic acceptance of the necessity of her sacrifice.

Almost as good is Capaldi, who shines as a manic, powerful Doctor, grinning terrifyingly out from omnipresent TV screens, blithely lying to the populace and calmly instructing people to inform on family members. He carries the pretense of the Doctor's defection so well that the viewer can truly believe he has sided with the aliens. After all, there is a strong argument to be made that humanity doesn't deserve free will, and after all the centuries of saving us from ourselves, the Doctor might finally believe that.

The problem is, it would have been much more interesting if the Doctor had been serious. It's fascinating that Bill turns on the Doctor so suddenly. After all, she sold out humanity in order to save him, on the strength of her faith in him, and it takes very little to finally shake that faith enough for her to gun him down. It's a tremendously powerful moment that is unfortunately wasted by the Doctor revealing the entire thing was a huge joke at her expense, a highly contrived way of testing to see if she was still on the side of truth and free will. It even includes a glimmer of faked regeneration energy, which seems to have been included solely to spice up the early season trailers.

From this point on, events plod on with a certain inevitability. Missy finally returns, and while Michelle Gomez is as delicious as ever, she's largely wasted as an exposition source in this episode. Revealed in her prison, playing piano and basically hammering home that the Sherlock finale was a dry run for this season of Doctor Who.

Missy claims that her life doesn't revolve around the Doctor - which is blatantly untrue in itself - but her claim to have defeated the Monks in an earlier adventure also rings false. Why would the Master care if the Monks have control of some planet? Far more likely that she once aided them in taking over a world, and she is relating how they were defeated. After all, the Monk's memory control technology isn't all that dissimilar to the hypnotic network the Master used back when (s)he became Prime Minister. And do we think, for a second, that Missy is really crying over all her many victims? Not on your nelly.

The cast are, by this stage, strong enough together to keep the episode watchable up until the end, but they're carrying all the work and the plot is doing nothing. It's fine having a serviceable resolution to a story, but this seems particularly uninspired. Bill remembering her mum to save the day through her emotional strength is far too much like Clara's "blown in on a leaf" story, which wasn't very convincing when they used it back in season seven. And then - it's all over, the Monks bugger off, and everyone forgets any of it ever happened, in another dissatisfying retcon. Although they've turned out as more style than substance, I hope the Monks do return to the series, because there must be something more interesting to be done with them than this.

Links and references: Nardole uses a "Tarovian nerve grip" to disable a soldier, blatantly riffing on Star Trek's Vulcan nerve pinch and also harking back to the Venusian martial arts favoured by the third Doctor. His jokey aside about his training and his new hand sounds very Doctorish, in fact. Imagine David Tennant delivering those lines as the Doctor and tell me it sounds any different.

Maketh the man: I really like the Doctor's new raggedy denim coat.

The Regeneration Game: So, the Doctor is now seemingly able to control his regenerations to such an extent that he can emit enough regenerative energy to put on a light show. Apart from the fact that this was rather pointless in story, seeing that Bill doesn't actually know what regeneration is yet, it raises some big questions about how much control has over his regenerations. If he can use the energy with such precision, why couldn't he just fix his eyes himself? Unless, of course, those weren't blanks when she shot him, and the Doctor has actually begun his regeneration, which would actually be a brilliant way to end the run.

Best line: I should probably choose the Doctor's rant against fascism and fundamentalism, but I can't help but love Bill to Nardole: "I'm gonna beat the sh-!"

Email ThisBlogThis!Share to TwitterShare to FacebookShare to Pinterest
Labels: Doctor Who, Doctor Who New Series, Doctor Who Series 10, reviews, The Master, Twelfth Doctor