SPOILERS from the beginning! 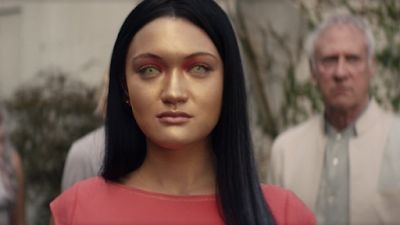 Already the most talked about part of this two-part finale, and deservedly so, it Picard's death and resurrection, his mind now housed in a Synth golem. I'm certainly happy that we'll get more Patrick Stewart in Picard's second season, but the death-rebirth of the title character seems rather cheap, not to mention predictable. From the moment it becomes clear that Picard's neurological condition is taking its toll and he is unlikely to make it through the finale, the golem that's lying on the slab is the obvious way out. It's certainly not a rarity for a major character in Star Trek to die just to come back again in short order; Spock made a whole movie out of it, after all. It simply seems unnecessary. Picard's neurological degeneration was seeded as far back as 1994, when the finale of The Next Generation showed his future battle with Irumodic syndrome. This could have made for some powerful drama as he struggled with the illness, or they could have left it as the sudden death it caused here. Instead, it's a minor inconvenience.

In fact, the way the final scenes play out make it look very much like two endings were filmed. The first saw Picard dead and his crew mourning, to stand as a final farewell if the series wasn't renewed. The second saw him resurrected should the series get a second season. In the event, the second ending is simply run after the first, creating a rather dishonest emotional journey for the viewer. Picard is ninety-four, for goodness' sake; it would be perfectly fitting to have this be his last mission. No one asks the character if he wants to be resurrected. It does give us a very beautiful scene with Data (beautifully recreated by Brent Spiner), as the two old friends meet in a quantum afterlife and discuss their respective demises. Whether Data needed another final scene after his actual death in Star Trek Nemesis is another matter, but this does provide some final closure for the character and works well. I love his decision to die, finally, noting that mortality is what gives life meaning. This, though, just hammers home how Picard's reversed death is rather meaningless.

Picard also has to come to terms with his new nature as a synthetic human, which should provide some interesting material for season two, although at first glance it doesn't appear to have changed him in the slightest. Of course, this Picard is technically a copy of the original, something which might not bother Data who was artificial in the first place, but should surely cause some philosophical crises for Picard as the story continues. Then again, this is a society that regularly uses teleporters, so technically everyone's a copy...

It's a symptom of a finale that tries to do too much with too little time, and leaves its many concepts underexplored. It's all very exciting, very beautifully realised, and never anything but entertaining, but it all rather falls apart when you think about it. I've enjoyed the slower pace of the series, but the unfortunate upshot is that a hell of a lot had to be covered in these two episodes, and much of it failed to hang together. The society on Coppelius (or Ghulion 4, if you prefer) could potentially be fascinating, but isn't developed. Isa Briones impresses in the dual role of Soji and her twin (triplet? Quadruplet?) Sutra, but there isn't much more to Sutra than just being Evil Soji with classic Data-colouring. She's dispatched so perfunctorily that we never get to see if there is anything to her beyond malice and fanaticism. Spiner, meanwhile, gets his own dual role, with Dr. Altan Inigo Soong popping up as the previously unseen fourth Soong brother. Only this is Noonien Soong's actual son, previously unheard of, and no wonder Soong modelled all his androids after himself – judging by his family, all male offspring are expected to look and sound identical to their father. There isn't a great deal to differentiate Altan from Noonien on TNG or Arik on Enterprise. I was expecting him to turn out to actually be Lore in an upgraded body, but no, I spoke to Soong.

He does bring out the best in Alison Pill, who excels as Dr. Jurati in this episode, coming through her traumatic experiences as a more confident, more capable person. She's still got off very lightly though, with her murder of Maddox seemingly forgotten about and a blossoming romance with Rios. A winning smile will get you very far, it seems.

There's an absurd amount of switching sides in the final episode, with Soji understandably jumping back and forth as she comes to terms with her situation, but Soong and Narek changing motivations as the slightest provocation. Narek's about-face is particularly hard to swallow, even as it's clear he has real feelings for Soji. For that matter, what happens to him? He just vanishes from the episode once he's finished being useful. He doesn't even stick around to have a word with Seven about his sister.

There are some amazing visuals and concepts here, though, and for sheer space adventure fun, this really is top notch. The Borg cube partly submerged in the sea is an amazing image, as are the orchids, gigantic weapons that protect Coppelius from outsiders. It makes a sort of sense that synthetic beings would use organic material in their tools. The magic gizmo that Raffi and Rios, and later Picard and Jurati, use is utterly ridiculous, a do-anything device that's allows even lazier storytelling than the sonic screwdriver, but my, it looks cool.

Riker swooping in with a huge fleet of starships to fight off the Tal Shiar/Zhat Vash's similarly huge fleet of starships is, of course, blatant fan service, but it feels appropriate in an episode that is as much about celebrating TNG as rounding up the storyline. Quite how Riker managed to swing that after several years of retirement is as mysterious as how Oh could have a gigantic fleet of ships at her disposal for her own mad vendetta, so at least that evens out, and it's no less barmy than the Starfleet/Klingon/Kelpien team-up against Control at the end of Discovery. Speaking of which, the tentacled nightmare that starts to make its way out of the wormhole above Coppelius looks very like Control's futuristic drones, and it seems inevitable there'll be some link made in the future.

Lots of loose ends hanging, though. There's nothing to stop the Synths from simply rebuilding the beacon and summoning the ancient monsters again, and surely they now know where they are anyway and could just come after them under their own steam. What's to say that these very alien beings would have any affinity with the Coppelian Synths, who are, after all, explicitly synthetic humans? Starfleet's lifting of the ban on Synths seems undeservedly easy, especially considering they've just proved that they're a major threat to organic life. While Picard's saving of the Synths and his rebirth as one of them resolves on side of his arc this series, his guilt over his failure to save Romulus remains unresolved, although I suppose he did help prevent them from all being slaughtered by evil AIs.

The first season of Picard has been a success, and even if the finale didn't quite manage to do the story justice, it was suitably entertaining. Strip away the Star Trek fanwank, though, and what you're left with is extremely human AIs with organic spaceships, huge space battles, and an ominous prophecy from the dawn of time about how history will continue to tragically repeat itself. “Et in Arcadia Ego,” is, at the end of the day, a perfectly reasonable episode of Battlestar Galactica.

Coppelius was supposedly traceable purely based on its moons and violent storms in a red sky, yet when we get there, it's clear blue skies for days. There's one brief scene featuring the scary sky.

It's very handy that there's a transwarp conduit with one end in deep space and another in orbit of Coppelius, but no more unbelievable than the one on Earth's doorstep in VOY: “Endgame.” Soong and Maddox might even have chosen the planet due to its proximity to a transwarp aperture.

The trip through transwarp takes La Sirena twenty-five light years in fifteen minutes, although starships in recent Trek seem to travel so fast this seems almost par for the course. In fact, for a transwarp conduit journey this seems positively sluggish.

Picard and Jurati come up with a new version of the Picard Maneuvre, the gambit first seen on TNG: “The Battle,” that Picard devised during the Battle of Maxia against the Ferengi. As he points out, this was on the USS Stargazer and it was a long time ago: it was 2355, forty-four years before this episode. Sadly, Picard doesn't perform the other Picard Maneuvre and tug his top down.

Riker captains the USS Zheng He, which he boasts is the most advanced starship ever built by Starfleet. The remainder of the fleet appears to be of the same class, though. No mention of any starship named Enterprise – why not go the whole hog and have Riker come to the rescue in the NCC-1701-E?

Narek believes the Romulan apocalypse myth dates back to before his ancestors arrived on Vulcan. Spock previously theorised that Sargon's people, the Arretians, may have been the ancestors of the Vulcans (and by extension, the Romulans) in TOS: “Return to Tomorrow.”

Picard is so far the only Star Trek series not to feature any Klingons. The Romulans have not appeared on Discovery, so this seems fair. I don't think any Trek series has made so much use of having cast members filling multiple roles as Picard, since James Doohan provided about 90% of the character voices on the animated series.

Raffi and Seven play kal-toh, the Vulcan game that appeared throughout Voyager. Their hand-holding is sweet, and a relationship between them could be wonderful, but they've not really interacted a great deal so, again, it feels unearned. At least Jeri Ryan got her LGBT Seven wish.

Dr. Soong has a synthetic cat, who he has named Spot 2.