There's no way to review this one without considerable SPOILERS. Go away and watch it, if you're in any way inclined but somehow haven't done so yet. I recommend it. 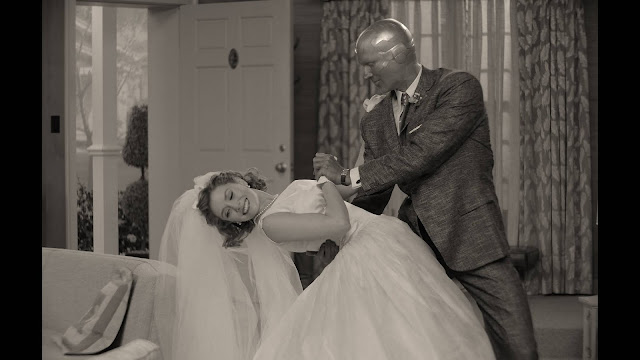 WandaVision is beautiful. Not just visually, although it certainly is: Disney+ making the most of incredibly high definition streaming to give us a visually striking universe that riffs not only on magic but on decades of American television. No, it's a series with a beautiful spirit, exploring love and loss in a way that only fantasy can manage. Fantasy makes everything larger than life, including death. A woman can resurrect her lost love and rework the world to create her perfect safe space while she tries to deal with her grief. There's a mystery at the centre of it, not that it's ever very difficult to work out what's happening - the questions that hang over it are how much of it is Wanda's deliberate choice and how much is her subconscious, and how much is down to something else, but the basics of what's going on are signposted. It's what it tells us about Wanda and what she's going through that is important. The Vision, in both his real guise in flashback and his recreated self, imparts the most powerful and heartbreaking lines. There's a real poetry to this show, underneath the jokes and the flashy effects, proving that comicbook and superhero properties can be profound when given the chance.

All of which would be wasted were it not for some truly excellent central performances. Elizabeth Olsen is astonishingly good as Wanda, and it's clear that, even in films like Civil War and Infinity War which gave her some focus, she's been unfairly overlooked. She grounds the series vitally as its tone swings between different styles and genres, selling the grief, confusion and turmoil of the character, but also her power. Comic fans have known for a long time that Wanda has the potential to be one of the most powerful characters in the MCU, we were just waiting for it to happen. While there's a bit of a thrill to hearing her finally called "the Scarlet Witch," it's pretty meaningless since that's what we've all been calling her anyway. What's more important is that her character has been given full expression at last.

Paul Bettany, though, is even better, seemingly effortlessly recreating his character from the films with yet more complexity. As well as some tremendous comedy skill, he's still the heart of this whole series, maybe even the franchise, and can dominate a scene with subtlety and style even walking around in bright green and red facepaint and a cape. I like that he based much of his sitcom character on Dick Van Dyke and Hugh Laurie (a combination of them would be pretty much the ultimate human being, after all). It's a classy performance. When the resurrected white Vision appears (who is presumably still at large, somewhere), he differentiates them with skill, making them clearly two aspects of the same being.

Yet none of this would be half as much fun without Kathryn Hahn, who is brilliantly funny and magnetic as Agnes/Agatha Harkness (and I cannot believe I didn't pick up on that clue - I blame that one on being unwell). I'd just watched Hahn's award-winning performance on Parks and Recreation so it was a treat to see her show up here, and she's cleverly introduced, slowly moving from being a minor additional character to being so ubiquitous that she must be a vital part of the plot. Hahn is utterly brilliant throughout, and while her character gets her just desserts, if we don't see her again in some capacity I'm going to be disappointed.

As the first instalment of the MCU's Phase Four, WandaVision tells us something about Disney/Marvel's direction for its huge slate of upcoming films and series. If there's a single word to sum up the approach, it's interconnected. Which might seem obvious - this is the MCU, interconnectedness has been a big part of it ever since that post-credits scene in Iron Man. However, until now, this was largely kept to the movies. Agents of SHIELD tried to maintain a strong connection to the films, but struggled with keeping up and ended up spinning further away from the core stories (to be honest I've long lost track of the series, but I understand it's basically its own universe now). The Netflix series such as Daredevil and Jessica Jones were interconnected to each other, but the links to the movies were flimsy and took viewers out of the street level world the series created when they were shoehorned in. WandaVision is the beginning of a new approach, where the TV series - or rather, Disney+ series - are going to be an intrinsic part of the ongoing story from the outset.

Jac Schaeffer, who previously co-wrote Captain Marvel and is responsible for the hopefully-soon-to-be-released Black Widow film, oversees WandaVision, but nothing with the Marvel Studios tag gets out without Kevin Feige's oversight. Everything has to link up now - there are no accidents, no dead ends, no bits with the Hulk that are forgotten about when he gets recast. Everything is important. So watching this means paying attention, because any little aside could turn out to have significance down the way. As well as clues to the nature of the series itself, the links to the MCU as a whole, and beyond, are laid out throughout, with a ton of unexpected character  appearances. Everyone's favourite Darcy (Kat Dennings) makes her long-awaited return being sassy and geeky in equal measure (and surely setting up a reprise in Thor: Love & Thunder). Jimmy Woo (Randall Park) shows up again after his adorable appearance on Ant-Man and the Wasp, becoming a new favourite for pretty much everyone as a solid, down-to-earth good guy (and I hadn't even realised that his character goes way, way back, to Yellow Claw by Atlas Comics in 1956).

More important is Monica Rambeau, now played by Teyonah Paris, who is perfect in the role of one of the most powerful characters in the comics. Rambeau, who we knew would be a big deal when she was introduced as a kid in Captain Marvel, is Spectrum, Photon, and Pulsar in the comics, as well as actually holding the title of Captain Marvel before Carol Danvers. As well as being set up for the next Captain Marvel movie, she has such great chemistry with both Randall Park and star of the series Elizabeth Olsen that she is crying out be brought back at every opportunity. Where it really got surprising though, was Evan Peters making his shock return as Quicksilver, hinting at a sudden, unexpected crossover between the MCU and the Fox X-Men universe. In the end, it looks like this was some clever teasing by Disney who now have the rights to these properties, and this version of Pietro was a fake-out, but given that Wanda's next appearance will be in Doctor Strange and the Multiverse of Madness there's still a possibility we're seeing the first inklings of the X-Verse breaking through to the MCU. (That said, where the hell was Dr. Strange during all this? Isn't dealing with magical threats like this his job?)

Officially, there are no plans for a second season. This makes sense given how self-contained WandaVision's storyline is, but given the number of potential stepping off points for a follow-up and the hugely positive reception of this series, it seems unlikely there won't be a revisit at some point in the future. Notably, the last teaser scene ends with the hook that Wanda's children Billy and Tommy still exist somewhere (I imagine that they're actual magical beings, changelings of some kind, rather than having been created entirely by Wanda herself under influence of her subconscious). Given how important the characters (as Wiccan and Speed) are in the comics I would be surprised if they weren't brought back somehow. Billy in particular is one of the most important LGBT characters in Marvel comics, being married to Hulkling... who happens to be part Skrull, the alien race who popped up again at the end to recruit Rambeau. Could this be more than just a set-up for Secret Wars? If there's one thing Marvel Studios have been very good at, it's leaving opportunities to follow-up characters should the fans express interest. Even after Multiverse of Madness, I feel Wanda is bound to have another major project of some kind. Even if that doesn't happen, though, WandaVision will stand as one of the most remarkable productions in the MCU.