Review: The Falcon and the Winter Soldier

SPOILERS for this one... I've given you a week, but if you're not caught up, don't read on. 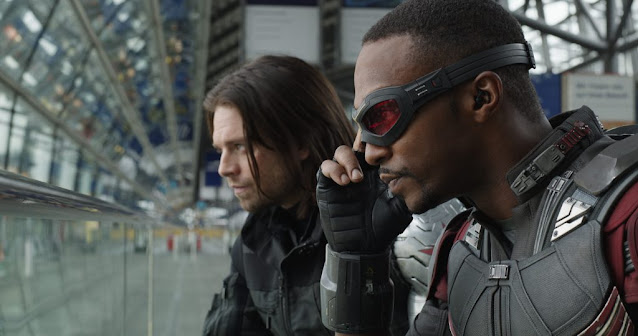 It's a tricky one, reviewing this a white British guy. This is a series very much about what it means to be black in the United States. Of course, life in the US reflects on life in the UK and the rest of the western world. Much like the excellent HBO series Watchmen, The Falcon and the Winter Soldier uses the comicbook world of superheroics to explore weighty themes including the deeply embedded racism of American and western culture. So it's never going to mean the same to me as it would do to a person of colour watching, much as I couldn't hope to truly appreciate the importance of a film like Black Panther or a series like Luke Cage.

It's a powerful series that covers other issues as well, but America's relationship with race is at the heart of it. The series is populated by various characters who've held the mantle of Captain America in the comics, not least the title characters. When Sam wrestles over taking the shield, it seems obvious he should do so to represent people of colour. As a white person, though, it didn't occur to me how profoundly controversial it would be for a black man to represent the US in this way - much as it remains hugely controversial when people of colour join the US police force. It's absolutely right that Isaiah Bradley is included. Retroactively made an early Captain America in the 2003 comic series Truth: Red, White and Black, a heavy influence on this programme, Bradley is an essential part of this story even as his involvement is fairly limited. Casting Carl Lumbly, always a class act, certainly helps sell the importance of this part of the story, of America's ongoing betrayal of its black citizens.

Anthony Mackie remains perfectly cast as Sam Wilson, who has been impressing us ever since he debuted in The Winter Soldier, making Sam a highly intelligent, compassionate man and a skilful warrior. Almost as good is Sebastian Stan as Bucky Barnes, who's settled into an unforgiving role and made the former Winter Soldier a truly three-dimensional, believable character, not a small achievement when he's a hundred-year-old superhuman cyborg. The unhappy collision of the two characters is, of course, the classic buddy cop set-up, gradually seeing them learn to respect, like and connect with each other, and it works thanks to two excellent performances and some genuinely witty writing (the counsellor's office scene is a gem).

Beyond the race issue, the series tears down America's image. Wyatt Russell is terrifyingly convincing as the new Captain America, John Walker, aka The US Agent, a parable on the traumatic effects of military service, the risks of steroid abuse and, of course, the violent and uncompromising image the US holds for much of the world. Utterly convinced of his own superiority and suitability for the role, he puts the America in Captain America, embodying the blind patriotism of the nation. The Flag Smashers, reworking a villainous character's name as a whole new organisation, are one of the most intelligent developments in the MCU. It's natural that the "Blip," as they're calling it, would have catastrophic consequences for the world and it's about time we got some real focus on that. It makes sense that there would be people who actually benefited from a drastically reduced world population and would be harmed by the return of the status quo. The Flag Smashers represent the fine line between legitimate protest against unjust treatment and outright terrorism, a line that isn't the same from every viewpoint. Erin Kellyman is exceptional as Karli Morgenthau, leader of the group, whose youth and unthreatening appearance show how anyone can be radicalised. Kellyman gives an astonishingly powerful performance, and is clearly going to become a huge name.

Many of the characters are fan-pleasing inclusions, but they all have a strong thematic role. Daniel Bruhl gets to finally do something interesting as Baron Zemo, after being a little wasted in The Winter Soldier, and his uneasy alliance with Barnes could be seen as representing the old order of American corruption: the safe haven granted to many Nazi scientists who used their talents to further American interests in the post-war years. Emily VanCamp finally returns as Sharon Carter, a character unceremoniously dumped after Civil War both in-universe andd out. Making her the Power Broker is a brilliant move, and makes perfect sense, her being yet another casualty of the shifting and untrustworthy power structures in place and forced to create her own position of power. Setting in Madripoor... well, that's just there for the fans, and as a little hint towards the future inclusion of the X-Men in the MCU, but it furthers the world-building of the parallel universe in which the movies take place.

It moves towards what might be seen as an obvious conclusion, but it's one that feels entirely right and deserved (although it has to be said that Walker gets off lightly, something that will no doubt have consequences in the future). Mackie's final speech upon taking on the shield is perfect. There's no subtlety to it, no hand-wringing, simply stating the absolute truth of the matter and his character's standpoint. While it's presented as a colourful action thriller, this is, at its heart, a boldly political series that has no time for clouding its message.