REVIEW: Back to the Future - The Musical! 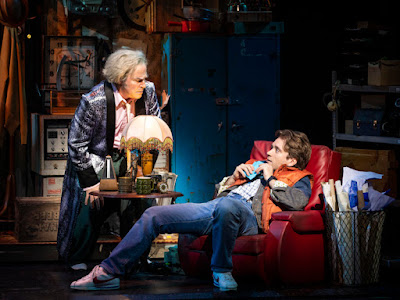 This could easily have been terrible. I mean, we'd still have enjoyed it, the missus and I; we went to see the long-delayed West End performance of the musical for Suzanne's birthday, the original being her absolute favourite film and all. The thing is, when you adore something that much, even a naff cash-in will bring you some enjoyment. That's how the tie-in industry works. But even casual fans of Back to the Future have to admit that's it's an exceptionally good film. Sure, there are a couple of problems, but honestly, it's a near-perfect combination of a meticulous script and production. It would be extraordinarily difficult to do it justice on stage.

And yet, they've managed it. The BttF musical is an absolute blast. Song-wise, it's a bit of a mixed bag. There are naturally a few songs that were inevitably going to be in there: “The Power of Love,” “Johnny B. Goode,” “Earth Angel,” even “Back in Time,” they're all in. There's some clever use of the main theme. Some of the songs really work, in particular Doc's song about dreamers – almost a companion piece to “The Rainbow Connection.” It's rather lovely. On the other hand, a lot of the songs are forgettable, ten-a-penny musical types. They serve their purpose to illustrate a scene then disappear. The only real clunker, though, is the bizarre opening number to the second half, an entirely pointless sci-fi song-and-dance that's clear filler. Overall, though, the songs work, they fit the scenes and, in many cases, help push the story's themes better than the dialogue alone.

The script is nicely done, a decent adaptation that keeps the best elements of the original while still offering something a bit different. There are some dialogue changes that purists might balk at, but at least it keeps things interesting – it's no fun if you can quote absolutely everything the first time you see it. The story's streamlined, with less jumping around locations and far fewer vehicles. There are no Libyan terrorists now, probably wisely, and while the skateboard chase is missed, it's understandable why, considering how hard it would be to make this work on a fairly small stage.

Altogether, though, the play is a visual and technical triumph. The combination of a complex movable set, ingenious props and dynamic and just-retro-enough video effects is spectacular. It's technically incredibly impressive, and it's never still, for even a single scene. Most impressive, though, is the DeLorean itself: a remarkable mechanical prop that drives, flies and appears out of nowhere to a familiar burst of light and sound.

It'd be nothing without a great cast, of course. Olly Dobson, who played Marty when the musical premiered in Manchester, is brilliant as the lead. He channels Michael J. Fox perfectly, and has great chemistry with the rest of the cast. Both his on-stage parents are spot-on too. Rosanna Hyland is excellent as Lorraine – somehow evoking Lea Thompson even more when she's playing the middle-aged version – but the most impressive is Hugh Coles as George. Making his West End debut, he gets George absolutely right, recalling Crispin Glover with uncanny skill.

Cedric Neal, who plays Marvin Berry and Goldie Wilson – the latter with an expanded role – is a scene-stealer, although he sadly doesn't give the “MaaAAAAAyyyooooorrrrr” that I was holding out for. Aiden Cutler makes Biff a more pathetic figure than in the film, a bit more sympathetic but still a root-against villain. Roger Bart, a recognisable face and a voice you'll have heard before, steals the show as Doc Brown. He wisely doesn't try to imitate Christopher Lloyd's performance – which would surely be doomed to failure – but instead gives us an inspired pastiche, somehow even more over-the-top than Lloyd's version. His performance is hilarious, but heartfelt, and he climbs an imaginary staircase as well as anyone I've seen.

The script, which was written by Bob Gale and Rob Zemeckis themselves, isn't as carefully crafted as the impeccable original, but is perhaps deeper, giving more time to the characters' relationships. We get a true sense of Doc and Marty's friendship that didn't fully come across until the final scenes of the first film, and Marty and George get more time to bond and get to know one another. Lorraine's incestuous infatuation with Marty is more intense, seeing as they can get away with slightly dodgier jokes now. Her infatuation with “Calvin Klein” is even reflected by Biff, who seems almost in love with Marty himself, he's so obsessed with facing him. One of the film's underlying themes, that “You can doo anything if you put your mind to it,” is brought to the fore and becomes a recurring motif. On the other side, there's a reflection on just how disappointing the twenty-first century has turned out to be, with Doc dreaming of a world with no poverty, no famine... no disease...

Silly, joyful, a touch satirical and full of energy, it's one of the most enjoyable musical's I've had the pleasure to see performed. Thoroughly recommended.

Email ThisBlogThis!Share to TwitterShare to FacebookShare to Pinterest
Labels: Back to the Future, musicals, reviews, stage