WHO REVIEW: Mind of the Hodiac 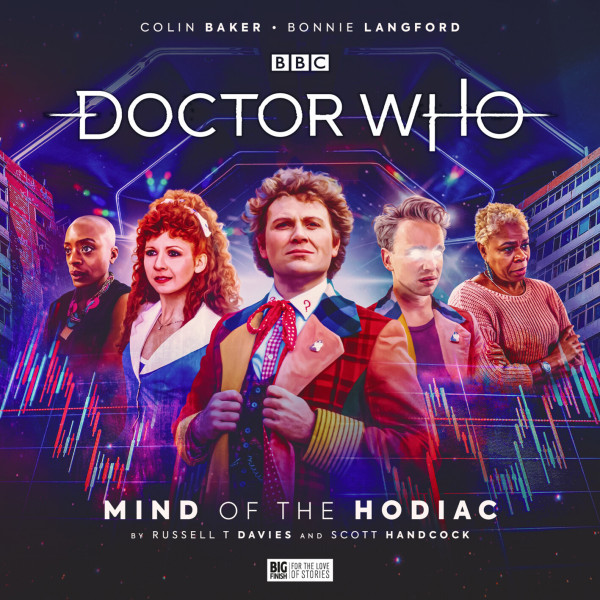 Mind of the Hodiac - a classically old school Doctor Who title if ever there was one - is a hotly awaited title from Big Finish. The latest in the Lost Stories range, Hodiac has its origins in a script that Russell T. Davies wrote in 1986 or '87, which he happened upon when ferretting through his old materials looking for things for the lockdown events.

One of the best regarded writers in the history of Doctor Who, and much beyond, he's certainly one of the most important. He brought the programme back sixteen years after its cancellation, and it's now been back for longer than that. This isn't the first time he's resurrected a script he'd submitted to the production team in the eighties. "The Long Game," back in series one starring Christopher Eccleston, was also a reworking of a script submitted to the latter years' production office..

But in these cases, remember, "submitted" means "rejected." Neither of these scripts were taken forward by the production team, who sent back positive-sounding notes to the young Davies. While "The Long Game" was substantially reworked for the modern series, it still felt the most old-fashioned episode of the series. Mind of the Hodiac doesn't even have that update going for it. Even though RTD's script was forward-thinking for the time, it's still very much Doctor Who of the eighties (and it's only forward-thinking in relation to the strange, idiosyncratic world of Doctor Who).

Big Finish have a long history now of bringing Lost Stories to life. Some are really rather excellent, others make it very clear why they were dropped in the first place, but the production team always goes out of their way to make the audios sound like they're recovered soundtracks from the era they were first submitted. This is both a good and a bad thing. I love eighties Doctor Who, in all its weirdness, but there's no way you'd make television like that anymore. Creating an audioplay that invokes the era runs the risk of recreating the worst of it, from dodgy music choices to some, shall we say, "heightened" acting.

Hodiac sits in the odd position of being very clearly written by Davies, but also very evidently a bit of late eighties Who. Colin Baker and Bonnie Langford are present and correct, this script presumably having been submitted for season twenty-four, before Baker had been pushed out of the programme. It's a glimpse, then, of an alternative twenty-fourth season, in which the Sixth Doctor travelled with Mel, and their easy chemistry in Big Finish shows that they're a team that could have worked very well. Here, though, although both actors give it their all, they're characterised oddly. Mel seems to be in a particularly bad mood, sounding more like Peri for much of the first episode, while the Doctor has developed an obsession with The Wind in the Willows and keeps relentlessly quoting it. The behind-the-scenes interviews reveal that Davies had just scripted a stage version of the book and had become rather obsessed with it himself, but while it fits with the verbose Sixth Doctor it quickly becomes irritating.

Potentially more interesting is the, unusually large, supporting cast. This is where the script is most obviously like RTD's other Doctor Who work. Hodiac features a strange juxtaposition of mind-bending sci-fi and mundane ordinary life, with a strong theme of family. T'Nia Miller (recognisable to Who fans as the regenerated General in "Heaven Sent" but better served by Davies's own Years and Years) is very good as Mrs Maitland, struggling to hold her family together after her husband abandoned her with her two daughters in an apparently haunted house. Sutara Gayle has hidden depths as her mum, while Loreece Harrison is brilliant as her forthright teenaged daughter Lisa. The pesky poltergeist activity drives them to the untrustworthy psychic investigator Mrs Chin. Another RTD favourite, Annette Badland, who of course played Margaret Slitheen in Doctor Who series one, brings Mrs Chin to brilliant life. A religious nutjob who thinks that somehow her work with the family will bring her closer to God, Chin provides an earthly villain and is pure Davies anti-religious theatre through-and-through.

All this works. Where things don't work so well is in the depths of space, in the hard sci-fi regions of the galaxy, where we meet a financial conglomerate that's willing to start devastating wars and recessions so long as it helps line their pockets. The anger at corporate greed is again very Davies, but none of this is very interesting. I work in finance, and frankly, hearing old men in space talk about it isn't any more exciting than hearing old men on Earth talk about it. Some middling performances by the many cast members in these scenes don't help. The Tungsten Warriors, while they sound cool, are faceless brutes, and while that's kind of the point of them, it's again pretty dull.

Sadly, the worst element of this is the eponymous Hodiac. From the same school of meaningless names as the Borad and the Lukoser, the Hodiac is one half of a being, separated in time and space. One soul in two bodies, reincarnated over and over, with nothing actually in common or to do with each other and, therefore, ultimately meaning nothing. Laurie Kynaston is giving it his best, I'm sure, but he isn't good enough to make the portentous sci-fi dialogue sound anything but risible. I do like the idea of a powerful space villain obsessed with the Doctor's coat, though.

A big failing with the production is clearly that only the first half is actually by Davies. There never was a script of the second episode, since it never got commissioned, although there were copious notes from which Scott Handcock wrote a new script. But with Handcock, one of BF's jobbing writers, creating the whole second half and adapting the first, it all becomes pretty standard Big Finish filler. That the Hodiac plot collides with an takes over the Maitlands' plot for much of the second half doesn't help either, since it sees the more interesting material reduced to make way for dull sci-fi nonsense.

Even though Davies's material is clearly better than Handcock's, it's still very obviously the early work of a promising young writer who hadn't quite found his voice or polished his skills. At the end of the day, for all the work the cast are putting into it, Hodiac is simply rather lifeless, and is more interesting as a historical document than an entertaining adventure.