TOS 1.29: Operation - Annihilate!
or
Captain Kirk vs the Splats

The Mission: Isolate the cause of a wave of insanity spreading through the Galaxy. 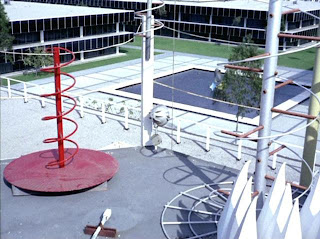 Planets visited: Deneva: a class-M planet, the location of the Deneva Colony and Deneva Base. It is considered one of the most beautiful worlds in the Galaxy. It acts as a freighter line base for asteroidal mining in the region. The amazing location work was done at the TRW aerospace centre, where the space probes Pioneer 1 and 10 were built.

Future History: Deneva has been colonised for over a century by this point, i.e at least as far back as the 2160s. Enterprise will later establish that Earth cargo runs have been visiting the planet since as early as 2153. A wave of insanity and death has been travelling across this section of space for centuries, wiping out the civilisations on Beta Portolan, Ingraham B, Levinius 5 and Theta Cygni 12. 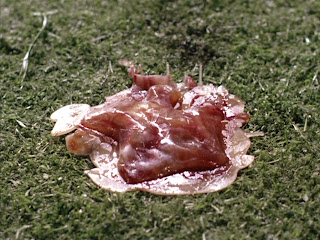 Alien life Forms: The alien parasites that plague Deneva don’t get a name. Some materials call them ‘blastoneurons,’ but we like to think of them as the Splats. They’re not the most successful of Trek’s many aliens. Even Yeoman Zahra says “They don’t look real,” and you can’t argue with her when you see the fried-egg monsters. Maybe they could have got away with them visually if they hadn’t added the squeaky, parpy sound effects. And then they start flying about!
Conceptually, they’re interesting. Each Splat is akin to a single gigantic brain cell, linked to its brethren telepathically. Individually, they’re simple, but together they form a single collective intelligence. They attach themselves to a host and use a stinger to inject a web of neural material that spreads through the victim’s body and takes ahold of their nervous system. It issues commands to the host; this, and the excruciating pain they cause, drives the unfortunate host insane. The Splats, apparently extragalactic, seem intent of travelling from planet to planet, using their humanoid hosts to construct and fly spacecraft. Luckily, despite their resilience, they have a single weakness: ultraviolet light.

Captain James T: We discover his brother Sam (aka George Samual Kirk) is living on Deneva with his wife Aurelan and son Peter. Kirk is understandably distressed by the news that Deneva is under threat, and torn up by the deaths of his brother and sister-in-law. He can handle the pressure of being responsible for the fate of a million lives, but is clearly under incredible strain in this episode.

Green-Blooded Hobgoblin: Becomes the latest victim of the aliens. At first, he is taken over and attempts to take the ship, but his incredible willpower allows him to work through the pain. Hard as fricking nails. He volunteers for the experimental procedure to rid himself of the parasite, and considers blindness an “equitable trade-off” for life and sanity. Luckily, Vulcans have an inner eyelid, evolved to cope with the bright Vulcanian sun, which protects his eyes enough that they recover and his sight is restored.

The Real McCoy: Is torn-up by his role in blinding Spock, but he did try to argue for more time for tests when Kirk pushed him forward. His first repsonse to the crisis is to preserve life, and he balks at Kirk’s plan to kill the million colonists to protect the rest of the Galaxy. He considers Spock the best first officer in the Fleet, but would never say so to his face. 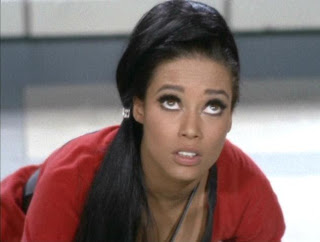 Sexy Trek: This week’s sexy yeoman, Zahra, is played by the very beautiful model Maurishka. She gets plenty of screentime, and quite right too.

Future Fashion: Aurelan’s stripy jumpsuit-type thing is kinda Seventies, which makes it pretty much the only genuinely futuristic outfit on offer in the series.

The Alternative Factor: James Blish’s novelisation of the episode in Star Trek 2, working from an earlier version of the script, has a completely different ending.
This episode is another that has been reworked for IDW’s new comic series set in the universe of the 2009 movie. Rather than dying (and being played by Shatner in a ‘tache), Sam Kirk lives and is revealed to have an antagonistic relationship with his brother.

Space Bilge: Why does it take so long for Kirk, Spock and McCoy to realise that light is the Splats’ weakness? They wonder what property of the sun might have freed the pilot who died in the opening moments, going through heat, radiation, gravity… um, what else does a sun do? Then McCoy goes ahead with a full-spectrum exposure, never stopping to consider if only part of the spectrum will do. Kirk is worse, pushing him to test it on Spock before he’s even had ten minutes to get the results in. Spock just walks in to the test without worrying about it, but he is under incredible stress from his infection. Once they finally realise UV will do, they use satellites to bombard the planet; all well and good, but we’ve already learned that the colonists are mainly hiding indoors. UV will kill the aliens outside, but it won’t even get through the windows. Assuming they did manage to blast all the colonists with enough UV to kill the monsters, does this mean they’ll all get sunburnt? It would be pretty miserable if they all died of skin cancer a few years later.

Verdict: Good fun, if clichéd; a pretty straightforward end to the season. Kirk, Spock and Bones all get their moment of focus, but the script relies on them being stupid far too much. It rattles along nicely though, never being anything less than enjoyable, and the three leads impress throughout.

That's it for season one of Star Trek. I should get back to some TNG before I start on season two. Until then, here's a rather wonderful fanmade video to enjoy.


Star Trek Alternate Title Intro from The Quintek Group on Vimeo.
Posted by Daniel Tessier at 13:38