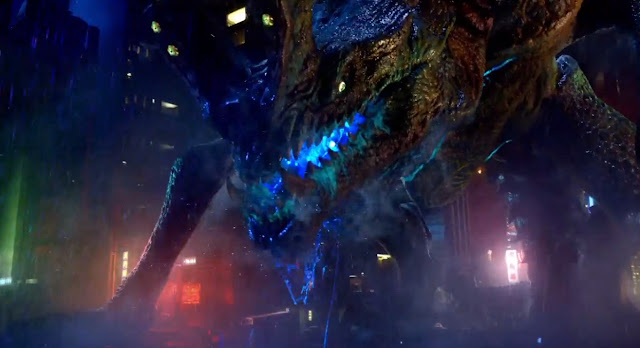 The movie is relentless in its pace, dispensing with much of its setup in a brief intro sequence in which we learn that mighty Kaiju have been ravaging the cities of the world since emerging from an interdimensional rift on the floor of the Pacific Ocean. Despite the opening info panel’s claims, kaiju most definitely does not mean ‘giant beast,’ – the best translation is ‘strange creature,’ or maybe ‘monster,’ – but the daikaiju genre of giant monsters battling and wrecking cities has become the primary source for the word in the West. Pacific Rim owes clear debts to the Godzilla series, mecha anime such as Evangelion and kiddie fare like Ultraman and his copycats. As the Kaiju rise to wreck the Earth and orthodox weaponry proves useless, mankind fights back with Jaegers, equally gigantic humanoid fighting machines.

One intriguing element that Pacific Rim adds into the mix is the need for two pilots to operate each Jaeger, sharing a neural link in a technique known as drifting. It’s a clever element that adds a little depth to the otherwise shallow characters, allowing us to explore their memories and see what made these lunatics want to strap themselves into giant droids and go fight monsters. The characters are, however, strewn from purest cliché: there’s the cocky jock who loses someone and has to prove himself fit for the job, the respected commander with a firm demeanour but a heart of gold, the delicate Asian woman with hidden strength, the salt-of-the-earth Ozzie and his bellend son, the overexcitable nerd… the scriptwriting leaves a lot to be desired.

Thankfully, the movie boasts a fine cast who do their best with the thin material. Idris Elba is, of course, excellent, bringing a real dignity to his role as the commanding officer, Pentecost. The lead male, Charlie Hunnam as Raleigh, does great work with what could have been a very shallow role, while his female costar, Rinko Kikuchi as Mako Mori, also does well, and the two share a good chemistry, which allows their scenes of drifting to really work. Of the supporting characters, Charlie Day does his best with the annoying science nerd Newt, and actually gets a decent sized chunk of the plot, as he develops a strange obsession with drifting with a fragment of Kaiju brain. Torchwood’s Burn Gorman does surprisingly well with a terrible part, Dr. Hermann Gottlieb, who, despite the German name, is a painfully clichéd English twit who says things like ‘By Jove!’ a lot. His comedy double act with Day gets wearing, but it is an effective way of getting the sciencey exposition over without it becoming tedious.

The star turn, however, comes from Ron Perlman, who plays black marketer Hannibal Chau, a lowdown crook who’s made it big selling Kaiju organs. The Hong Kong scenes involving Chau are among the film’s most effective, letting us see the effect of the Kaiju on the world at ground level, from buildings constructed around skeletons to the Kaiju attack shelter. While the HK scenes were probably included to add appeal to the lucrative Chinese market, but they are the only part of the film that really feels like the work of director-producer Guillermo del Toro.

The Kaiju battles are undeniably effective, hi-octane action scenes, but their relentless nature and the decision to add swathes of rain and ocean combat makes it very difficult to actually follow what is happening. The Kaiju themselves are impressive creatures, but they are frequently so difficult to see clearly that there’s no real chance to appreciate them. Wayne Barlow’s excellent creature designs are lost amid a haze of foam and rubble. The Jaegers are just as impressive, each construction echoing the styles of its nationality and wearing their dirt and dents with pride. Within the cockpits, the cast are frequently reduced to macho posing which, when filtered through the display units, makes whole sequences look like they’ve been lifted from an early Playstation game. Thankfully, some of these scenes are used well, bridging the drifting sequences that explore the characters.

The film’s not really about anything, though – the original Gojira personified the nuclear bombs that hit Japan in WWII, while the more recent American effort Cloverfield traded on the atmosphere of terrorist attacks. So, no, this is not a film with great depth. But it is great fun, a fine popcorn movie for monster fans and anyone who likes a decent actioner. It’s certainly extremely well made, and does what it sets out to do brilliantly – only in the final, climactic battle does the film overreach itself. It’s shallow, it’s clichéd, but it’s easy watching and there’s plenty of room for that in today’s cinema. It’s basically a big-budget Power Rangers, but it’s as fun as that sounds, and if nothing else it’ll sure sell a lot of toys.
Posted by Daniel Tessier at 13:43