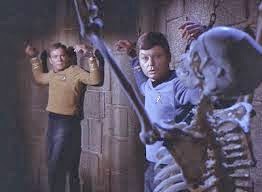 The Mission: There's a curse on the Enterprise, or something.

Planet's visited: Pyris 7, a gloomy, mist-shrouded planet. It's a spooky blue-grey in the original version, and grey and clouded in the remastered. Korob and Sylvia hae set up their base there, in the form of a huanted castle.

Alien life forms: Korob and Sylvia appear to be human, but are, in fact, two aliens from a distant galaxy, who have been sent to the Milky Way on some sort of mission for “the Old Ones.” They come from “a world without sensation,” and the human form, with its touch and emotion, is alien to them. Korob seems out of his depth, but Sylvia has gone completely nuts. She also likes to turn into a cat, for some reason. 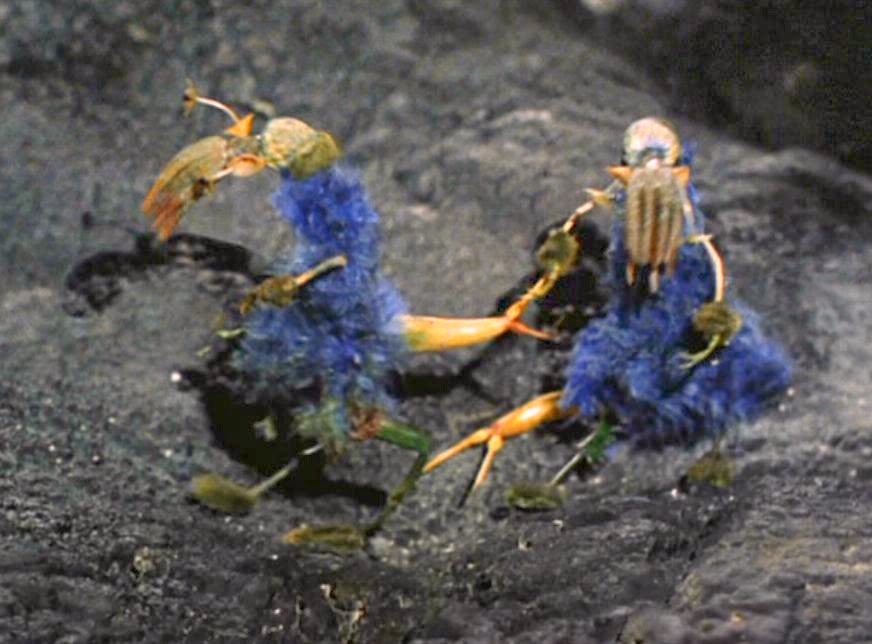 Their natural form is revealed to be small, almost birdlike chirping creatures covered with blue fluff, with tentacled heads. They appear to be mostly pipe-cleaner based. Unable to survive in our galaxy, they rapidly die and dissolve once returned to their own forms.

Alien Treknology: Korob and Sylvia use a device called a transmuter to control matter, create illusions, control their victims' thoughts and maintain their human forms.

Captain James T: Has no qualms with using Sylvia to get to his abducted crew. He similarly has no time for Korob's illusions. Kirk is unusually grim and humourless this episode (given all the death he's seen in recent episodes, this isn't surprising).

Green-Blooded Hobgoblin: He's never heard of Trick of Treat, and dislikes bad poetry. He spouts some arse about the illusory world being taken from “the twilgiht of consciousness” or something. (Sounds rather like the time the Doctor thought he was in the dark recesses of the human mind, when it was actually just a funfair, in the 1965 Doctor Who episode, “Journey Into Terror.”

The Real McCoy: Is easily the most rattled of the trio when it comes to the spooky surroundings. He has the misfortune of being zombified by Sylvia, as do Scott and Sulu.

Tsar of all the Russias: Clearly, this one was recorded early, judging by the state of Walter Koenig's wig. He doesn't like being thought of as green. He copes pretty well, all considered.

The Rank and File: While major characters often go AWOL for a week or two, James Doohan and George Takei appear here, but without any dialogue until Scott gets a line in the last scene. Even Crewman Jackson gets a line before he is unceremoniously killed by Sylvia. With the five highest ranking officers on the planet, Lt. DeSalle has the conn. What he doesn't have, as far as I can tell, is a personality. Uhura is on the bridge, though, so the full core crew is present for once.

Author, Author: You can tell this is a Robert Bloch episode when the baddies mention the Old Ones. There's often a shade of Lovecraft in Bloch's work.

Trek Stars: Theo Marcuse does his best with the filmsy character of Korob. The random close-ups of his boggling face do liven the episode up. Sadly, Marcuse was killed in a car crash only a month or so after this episode was first aired.

The Verdict: I had to watch this one twice, because I fell asleep the first time round. Basically a crap version of “The Squire of Gothos,” this is naff filler material. A Hallowe'en episode of Star Trek should really be a lot more fun that this. I liked the pipe-cleaner aliens though. 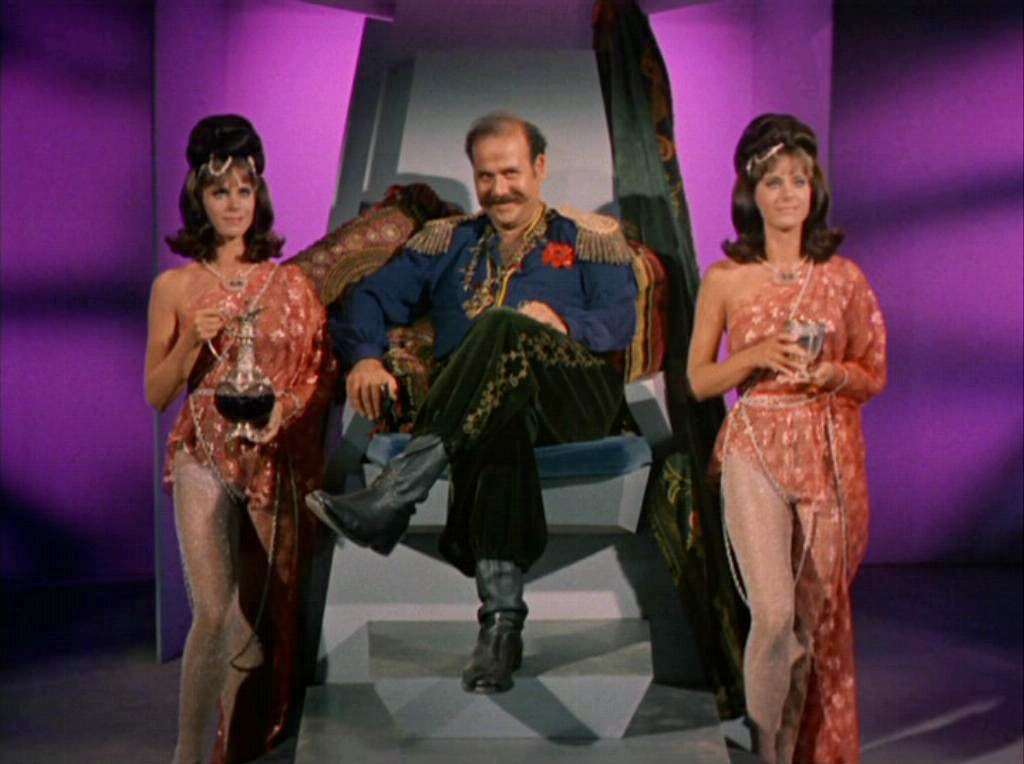 2.8) I, Mudd
or
Captain Kirk vs Harry Mudd: The Sequel

Mudd's Mission: Having escaped from the Denebians, Harry Mudd is now the captive king of a planet of android servants. He needs a starship to escape...

Planets visited: The planet Mudd, named by Harry after himself, an uncharted K-class world, its surface adaptable for human life by use of pressure domes. The remastered version has a ring system.

Alien life forms: The Makers were a humanoid civilsation who once inhabited the great spiral galaxy of Andromeda, served by their robots. When their sun went nova, the Makers were wiped out, with only a few robot outposts remaining. Their Milky Way outpost has been running, purposeless, for thousands of years.

Alien Treknology: The androids are physically invulnerable, completely logical and have an estimated lifespan of 500,000 years. They are centralised through a processing unit to the number one android, Norman. To begin with, they wanted humanoids to study and serve, but now, having seen what they are capable of, they have decided to conquer the galaxy and run humanity for their own good.

Captain James T: Is there a little affection mixed in there with his anger and frustration at seeing Mudd again? Not for long, though, as he soons has him against the wall by his neck. He's the only one of the human crew not tempted by the various delights on offer on the android planet. He comes up with a plan to confuse the androids to death, then reboots and reprogrammes them (or presumably gets Spock and Scotty to do it), and strands Harry on the planet with five hundred replicas of his ex-wife.

Green-Blooded Hobgoblin: And they say he has no sense of humour. He rips the piss out of McCoy in this episode. He's also very good at using illogic to baffle the robots. He thinks that there is nowhere he is more needed than on a ship full of illogical humans.

The Real McCoy: Has a funny feeling about the new crewman Norman. He doesn't think a man who never smiles or talks about himself is alright (he then realises he's talking to Spock).

United States of Africa: Uhura is worryingly tempted by the prospect of having her brain transferred into an android body and living for half a million years.

Sexy Trek: Disturbingly, most of the 200,000 androids have been modelled to Harry's specifications, to be “compliant” female facsimiles, programmed to act as real women. Urgh. There's also the implication that Chekov may have taken advantage of this offscreen.

Trivia Facts: The penalty for fraud on Deneb 5 is death. Death by electrocution, death by gas, death by phaser, death by hanging...

Links: According to some media, the planet Mudd is the same planet as Galor 4, where in TNG times, the Daystrom Institute has an annex for studying android technology.

Space Bilge: The stuntman standing in for Norman actor Richard Tatro in the fight scenes looks nothing like him. And how did Norman get into the Enterprise crew in the first place?

The Verdict: If you can forgive the hugely sexist content that all Harry Mudd episodes come with, this is very good fun for the most part. Shatner shows off his flair for comedy, particularly when facing off against Carmel as Mudd. The vaudeville of the final act gets boring, however.
Posted by Daniel Tessier at 22:30