This is the first in an occasional series of reviews as I go through my Hammer Horror collection in no particular order. New 'I Was Raised by Spacemen' on the way too! 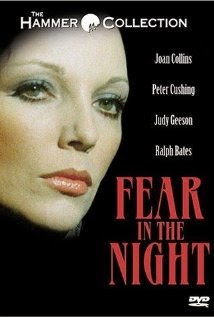 Fear in the Night is one of the later films of Hammer's great movie period. It's one of those lesser known films that most people have never heard of, fewer still have seen. I had never seen it before, so I picked it out of the box set to begin my Hammerama. It's easy to see why it's less well-known; it lacks the gothic horror trappings that Hammer are most famous for, and it's terribly slow and light on action for the vast majority of its runtime. It takes an absolute age to get going. The opening titles run over completely incident-free establishing footage. I can't imagine a film starting like this today. Audiences would get up and leave before the characters were even introduced.


It's a slow burn psychological horror, the sort of thing Hammer did less often and to less acclaim, but were nonetheless very good at. Although posters billed Joan Collins as the big star – and very good she is too, a real vicious bitch – the main protagonist is Judy Geeson as Peggy. Geeson is gorgeous, boyish and wide-eyed, convincing perfectly as a naïve young woman in over her head in a situation she doesn't understand. There's an uncomfortable atmosphere throughout the film, a sense that nothing is under Peggy's control. It's revealed early on that Peggy has recently been institutionalised due to a nervous breakdown, and while she is cared for, nobody lends her claims of assault any credence. Of course, the fact that her new husband Robert, played by a marvellously sinister Ralph Bates, is clearly up to something adds to the unsettling feel.


Stealing every scene he's in is Peter Cushing, always the man to turn to if your horror film needed a boost and a touch of class. He plays the wonderfully named Michael Carmichael, a one-armed, psychologically damaged headmaster, and is horribly creepy throughout. He's far, far too tactile and overly friendly, in a disquietingly false way. He just makes your skin crawl. He comes out with lines like, “Do you like tying knots in things?” Wisely, director and writer Jimmy Sangster follows the edict that, if you reveal a noose in the first act, you must use it in the third.

The setting of a seemingly empty boys' school adds a touch of Hammer's gothic ethos to the proceedings, and the exact nature of the plot remains a mystery until the final act, when the pace rapidly increases. For a short time, it looks like this might be a ghost story, but it's far more mundane and cruel than that. It's a slow, strange film, but worth giving time.
Posted by Daniel Tessier at 11:01