Another handful of comics to round off the month. The very last of August's releases will be reviewed in September, because I am apparently unable to ever reach the comic shop on a Wednesday. 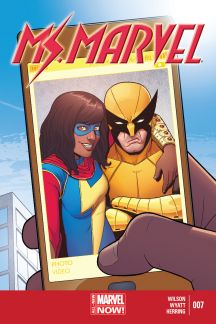 Still Marvel's best current title, and apparently outselling Avengers right now. It's just gorgeous, it really is.
Kamala is the most believable and most likeable new character in years, and her unlikely friendship with Wolverine works because they're such an odd match. Yet they make a good team because of their similarity of attitude: get it done, rely on yourself, be strong in the face of weakness. It also doesn't take itself to seriously; the villain in this weird little two-parter is the half-cockatiel clone of Thomas Edison. It's also very much embedded in the wider Marvel universe, for better or worse. So far, this element has been a strength, mainly because Kamala has the same fan tendencies the readers have.

So, I thought Superior Spider-Man, the "Doc Ock as Spidey" run, had finished, but no. This is the first installment of the multi-reality crossover event that will dominate the many, many Spider-related titles over the next few months. It actually takes place during a previous Superior Spider-Man adventure, but to be honest, it works because it's set on its own path and the fact that I followed none of that run doesn't seem to hurt a bit. The time and reality hopping adventure sets up the big events that will hit this autumn, and the arrogant Ock-Spidey is actually quite a joy to read. Plus, we get Spider-Man 2099, Spider-Man India and even Spider-Monkey fro Marvel Apes all thrown in.

Alternative realities are also the order of the day over at DC, with Grant Morrison's new masterwork kicking
off with this issue. It's another big event, but it sounds like this one will be more contained, so that I might actually be able to read all of it. Two bookend issues plus six one-shots - much more palatable. This is actually very good, combining Morrison's irreverent satirical side with his weirder magical stuff. Not that I honestly think he believes all this stuff, but his persona as great comics wizard lends the "You are the hero" style metatextual side some clout. Exploring a number of the fifty-two universes of the "New 52" imprint, this mixes colourful superheroics with genuinely unnerving Lovecraftian horror. Add to that a deliberate choice to include a high proportion of heroes of colour, and this is a bold and enjoyable book. And Captain Carrot, the bunny hero, is sublime.

IDW's ongoing Star Trek title begins a five-part storyline entitled "The Q Gambit." Bringing Q into the Enterprise-E, it sets up the worrying possibility that, by saving his own reality from the Hobus supernova, Spock's presence has doomed the new timeline. Thence, Q goes to alt-2260 and plays with Kirk before whisking him, his ship and crew to their own future: a devastated 24th century in which the Federation has been conquered by the Dominion (seemingly including the Cardassians and Klingons). The choice of DS9 rather than TNG as the main setting seems odd at first, but it works: the harder, grittier version of Trek we saw in the latter seasons of DS9 works well as a counterpoint to new-Kirk's relentless optimism. A superior crossover.
Abrams-verse is a bit of an obvious tactic, but this is cleverly done. Beginning with Q visiting Ambassador Picard aboard the

Is this the twelfth Doctor's first appearance in comics, or did Doctor Who Adventures get there first? I'm not sure, but this new story (after a Vastra/Jenny/Strax buffer story) kicks off the new Doctor's era just a few days before his official TV debut. "The Eye of Torment" retains the DWM dreamteam, Scott Gray and Martin Geraghty. Set on a station orbiting the Sun, this has some truly impressive solar vistas (fine colour work by James Offredi) and some well-drawn characters facing a suitably sinister threat. A fine start.

Not really a comic, but I couldn't go without mentioning Robert Rankin's latest ridiculous offering. A new illustrated storybook in the vein of his previous Alice of Mars, this is actually rather better. It's funnier, his artwork has improved on what was already some very striking black-and-white linework, and it has more kiwis in it. Yes, this is the story of the Divine Commodore and his cohort of kiwi birds on their fabulous journey across the high seas. Gloriously silly and free of cynicism, this is old-fashioned, daffy fun. That Rankin has clearly modelled the Commodore on his good self is a lovely touch. It's a beautiful, limited-edition volume, and it comes both signed and with a free fortune-telling fish! Which makes an excellent bookmark.