HAMMERAMA: The Curse of Frankenstein (1957) 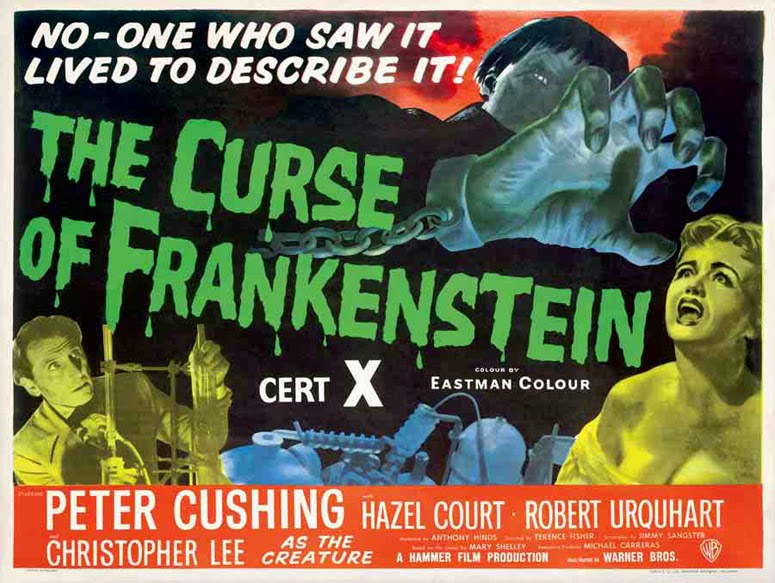 You can't have Hallowe'en without a bit of Hammer, and despite the unseasonal blazing sunshine this gone Hallows Eve, I turned to the film that put Hammer Horror on the map. Hammer had, of course, been around for many years before The Curse of Frankenstein, and had dabbled in sci-fi and horror with such titles as The Quatermass X-Periment. Yet it was Curse that would kick off their reputation as the masters of British horror. Full colour X-certificate gothic horror with just enough gruesomeness and gore to shock and entice the British public in equal measure. While tame by the standards of today's gut-drenched horror films, Hammer's chillers were scandalous by the standards of the time. Critics savaged Curse as debased and depraved as much they applauded its acting and production techniques.


There have been dozens of films based on Shelley's novel Frankenstein, already almost 140 years old when Hammer produced its own version. There were already numerous such films by 1957, the most famous and well-regarded being Universal's 1931 film. The success of this was jealously guarded by the company, and Universal did everything they could to ensure that Hammer could not replicate any elements of the monochrome classic. Every adaptation of the novel has played fast and loose with the source material, and Hammer's is no different. Indeed, the need to differentiate their version from Universal's perhaps led to the very different plot used in Curse, which bears little resemblance to that of the novel. Bookended by the possibly insane Baron Frankenstein telling his story while awaiting the hangman's noose, the storyline retains the fundamentals of the scientist stitching together a creature from human corpses and bringing it to life with electricity, but little else. Notably, one element to make it through was the Creature's encounter with a poor blind man, albeit playing out quite differently than in the book. It's a scene notably absent from Universal's version, although it was worked into its sequel, Bride of Frankenstein. However, while in the novel and Bride it is used to develop sympathy for the Creature by providing someone who does not see his terrible visage, Curse uses it to ramp up the horror and danger posed by the Creature.


This is, of course, the first outing for Hammer's classic double act, Peter Cushing and Christopher Lee, although not the first ever film to feature them both (that was a 1948 production of Hamlet, although Lee was uncredited). The duo would star in a number of films together for Hammer, often as opposing characters, and struck up a deep and famous friendship. Cushing is absolutely fantastic as Victor Frankenstein; idealistic, engaging, yet chillingly amoral and oozing with hubris. In spite of his great intellect, he is a borderline sadist, taking very little time to progress from drowning puppies to murdering old friends in cold blood. Not to mention his cold-hearted affair with his own housemaid, little more than a sex object used by the Baron to sate his baser impulses. Lee, however, is rather wasted here, with little opportunity to show the skill that later made him so renowned. Cast primarily for his height (his role almost went to Carry On... star and future Ice Warrior Bernard Bresslaw), he has no lines and surprisingly little screentime. Nonetheless, Lee manages to bring both fearsome power and an injured vulnerability to the part of the Creature.


Part of the agreement of terms with Universal was that Hammer's version of the Creature could not look like the infamous flat-topped version played by Boris Karloff. Make-up artist Jack Pierce created a unique new look for the Creature, and while it will never be as widely recognised as the Universal version, it has its own distinct quality. It's a particularly unpleasant version of Frankenstein's creation, with rotten, pallid flesh boasting very visible stitching. One eye is white with cataract, while the other is piercingly intelligent. It's a deeply unsettling image. 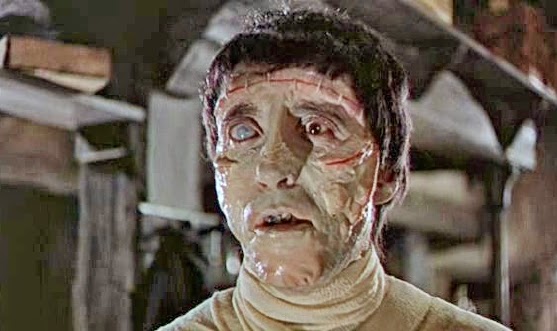 The film has a small cast, with the bulk of scenes going to Frankenstein and his teacher, accomplice and eventual enemy, Paul Krempe, played with conviction by Robert Urquhart. Melvyn Hayes is impressive, and convincingly Cushing-like, as Victor's younger self. Hazel Court is also very good as Elizabeth, the potential Mrs Frankenstein. But it's Cushing who owns this film, his every scene bristling with charm and threat in equal measure. He is, quite appropriately, electrifying.

The success of The Curse of Frankenstein would lead to the production of six sequels, all but one featuring Cushing as the mad Baron. More significant is that Curse launched Hammer into focusing almost solely on Horror until the mid-seventies. Hammer immediately went into production on Dracula, which reunited Cushing and Lee and allowed the latter to show just what he was capable of. Dracula, its own follow-ups, and the 1959 release The Mummy, cemented Cushing, Lee and Hammer as the new faces of horror.
Posted by Daniel Tessier at 19:29