WHO REVIEW: Seasons of War

Since John Hurt's one-off appearance in the 50th anniversary special The Day of the Doctor, Doctor Who fans have been eager to see more of this mysterious incarnation of their hero. All we've had are the aforementioned special, a brief appearance in the preceding episode, a post-regenerative glimpse in mini-ep The Night of the Doctor, and a single novel, George Mann's Engines of War. Until now. 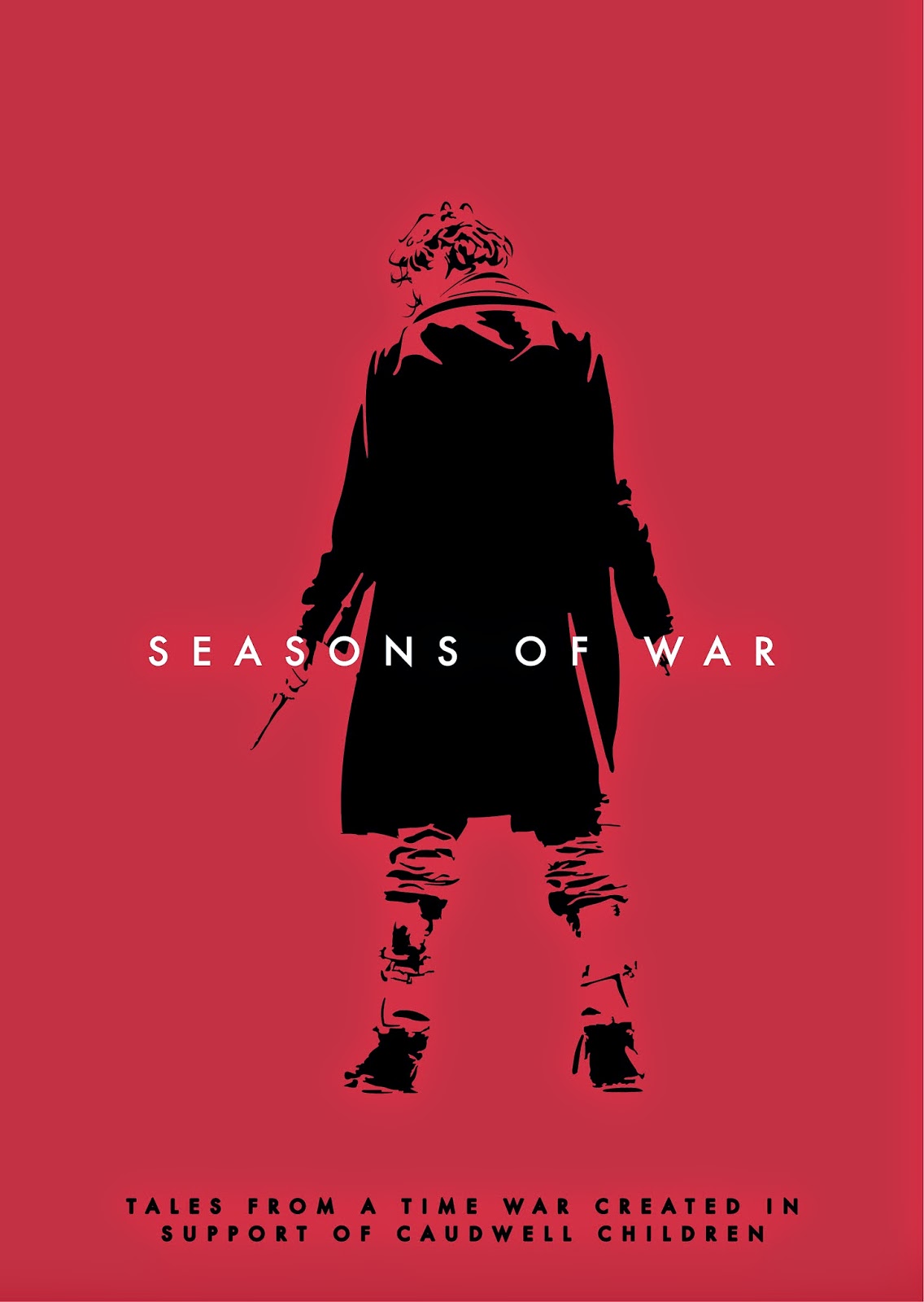 Declan May, in association with Chinbeard Books, has developed Seasons of War, a grand undertaking bringing together both new and established authors to create a host of new stories featuring Hurt's War Doctor. The unofficial Doctor Who anthology is something of a tradition, from such old favourites as Missing Pieces through Walking in Eternity and up to Shelf Life. Seasons of War follows this grand tradition but takes it further, crafting a multimedia experience to go along with the, frankly exemplary, short fiction anthology. A quick visit to the website will allow you to not only learn more about the background of the project, but also view a specially shot short film, starring one Tom Menary as the man once called Doctor. Plus, you can visit the site of Caudwell Children, the charity May has chosen to benefit from the sales of his book. An organisation dedicated to improving the lives of children with disabilities and life-threatening conditions, Caudwell Children is an established national charity that does remarkable work. I don't think May could have chosen a more deserving cause.


The anthology itself boasts a huge collection of stories, and is sure to be a hefty tome once the physical paperback version of the book is released (as of writing it is available in Kindle and PDF formats). Doctor Who fans will recognise many of the names attached to the project: there are stories by acclaimed novelists including Paul Magrs, Lance Parkin, Kate Orman, George Mann and Jenny Colgan, as well as Who stalwarts such as Gary Russell and John Peel. The excellent Matt Fitton takes a moment out from his Big Finish work to pen the opening story – the Epilogue, of course – while the writer of 1981's Full Circle, Andrew Smith, also provides an adventure. As a Doctor Who fan, however, the most affecting part of this publication is the preface by the great Nick Briggs, speaking about Paul Spragg, to whom this book is dedicated. For those who don't know, Spragg was a vital member of Big Finish's team who was a beloved figure in fan circles, and his sudden death last year was a shock to us all. As Declan May points out, even those of us who never really knew him well were hit by his loss. I'd scarcely even communicated with the man, but he was such a part of Big Finish that his loss is felt any time I listen to one of their regular, much-adored podcasts. One of the last projects Mr Spragg worked on was this very anthology, setting much of it in motion, and so Seasons of War stands as a lasting tribute to him.


And no finer tribute could he have had. Seasons of War is a truly excellent piece of work. As noted, it begins with an epilogue and ends with a prologue, as befits a book concerning war across time, but for the most part, the stories are arranged in chronological order from the Doctor's point of view. Between the main stories lie vignettes, uncredited but presumably written by May, which lend context to the individual tales. Taking the War Doctor's life from his first moments on Karn to his final fateful decision on the eve of the Last Day, there's a definite evolution of the character. While each author has his of her own take on the character, there is certainly a consistency across the collection. For the most part, the War Doctor begins hardened and callous, but gradually his compassion resurfaces as he grows older. Nonetheless, he grows more desperate as the War grinds on, and both suffers and commits terrible cruelties. We see him at his most ruthless, almost unidentifiable as the Doctor, in “Here Comes the Doctor” by Christopher Bryant, but his most questionable actions are always followed by regret. There are companions, from time to time, most notably the Girl with the Purple Hair, whose relationship with the Doctor is just as timey-wimey as anything in Steven Moffat's episodes and just as beautiful and tragic. While some stories take place on the front lines of the War, many of them occur on its fringes, exploring the effects on individuals and cultures that exist in the sphere of conflict.


There's a great mix of material in here. When the harder, uncompromising war stories threaten to become a bit much, a lighter interlude pops up. There's some genuinely funny material amongst all the horrors of war. Often, the quieter moments between battles allow more exploration of the War Doctor's character. It's not all prose, either. Matthew Sweet's “An Historical Curiosity” takes a twisted, Whovian look at Shakespeare and makes some fun pokes at continuity and canon while it's at it. Jenny Colgan provides a sonnet. Jim Mortimore and Simon A. Brett provide a glorious comic strip account of the War, and Paul Hanley provides excellent artwork throughout. While, as with any anthology, some stories are better than others (or simply more to my individual taste), the overall standard of the work is extremely high. I'm not reluctant to say that Seasons of War contains some of the best Who fiction I have read in a very long time. There's also, as one might expect, some exploration of the mythology of the series, including not only terms we've heard in relation to the War such as the Nightmare Child and the Horde of Travesties, but elements from other eras of the series. The Corsair makes and appearance, as does the Land of Fiction. George Mann provides a missing scene from his own War Doctor novel. Strands are connected, but it's never overbearing or to the detriment of the stories. One small quibble is that some elements can become a little repetitive in the early part when the character is still being established. The War Doctor's dislike of being called the Doctor is handled better by some authors than by others, for instance, and it becomes a little gimmicky on occasion. That is a very minor complaint, though, in a collection of such quality.


Many of the best stories are by authors who are new to me. I'm not going to go into detail on every entry in the collection, but certain stories to warrant particular praise. Christopher Bryant's aforementioned “Here Comes the Doctor” is a highlight of the early part of the book. “The Holdover” by Daniel Wealands is a powerful exploration of the lengths to which authorities will go in times of war, and shows us better than any other story how low the Time Lords have sunk. With “Making Endings” Nick Mellish weaves an affecting tale with a genuinely clever twist, while Alan Ronald's “The Ingenious Gentleman” provides a welcome respite from the War with a meeting of two improbable men. Jon Arnold's “Always Face the Curtain With a Bow” is a wickedly funny but ultimately haunting tale that affects the Doctor deeply, something that is not forgotten later in the collection. Matt Barber's story, “The Fall,” seems especially pertinent as I write this on the 22nd of February, the anniversary of the death of Doctor Who' old soldier, Nicholas Courtney.

For me, however, the strongest story in the collection is Paul Driscoll's “The Time Lord Who Came to Tea,” an incredibly moving portrait of the life of one girl in the slums of wartorn Gallifrey. While the details of the horrors she experiences are imaginative and fantastical, it reflects the hard truth of reality; that the people who suffer the most during wartime are often the ones who are not involved in the fighting at all, but ordinary people struggling to survive. A truly affecting, remarkable story. While I pick out these few stories as particular favourites, the whole collection really is excellent. Plans are already afoot for volumes two and three of Seasons of War. There's even a cliffhanger.
Posted by Daniel Tessier at 13:33