You know what? I really enjoyed that. This hasn't been the most consistent of series, and there are problems with the finale that reflect this. It's certainly not what I expected to see, following on from the remarkable Heaven Sent, but that's not a bad thing. This was a perfect end to the season, and to Clara's story. Clara's character has suffered particularly from the inconsistency this year, and she's never been the most consistent character in any case. As a farewell, though, this worked beautifully. As many have pointed out, this was essentially an inversion of Donna's fate at the end of season four, with Clara taking retaining her own agency and the Doctor being punished for his own arrogance and hubris. "Never be cruel, and never be cowardly; and if you are, always make amends." For once, the Doctor was both cruel and cowardly, and he payed for it.

So they're out of the way, complaints (ish): 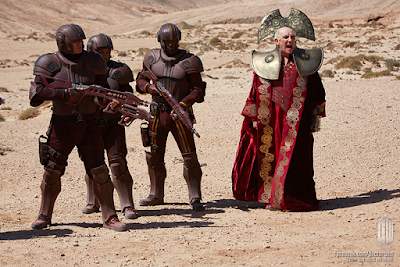 With that out of the way, though... this was rather joyful, when it wasn't milking tears. The Doctor goes home - and he really goes home, not to the President's office but to the place he hid out as a child. I was very pleased to see the General again (I'll have to stop calling him General Bones now). A shame to lose Ken Bones, who I rather adore, but that regeneration was just fabulous. T'nia Miller is actually rather excellent as the new General, with a real authority that makes it believable she's the same character. And the gall of it... the old white guy regenerates into a young black woman, right in front of us, a full-blooded Time Lord, damned right it's canon, deal with it. And basically says, "ah, back to normal at last." Just perfect.

Even before that though, the moment between the Doctor and the General, the former acting appallingly, blinded by love, the latter standing his ground, unwilling to waver. Two characters with utter respect for each other, at odds. It's a beautiful scene. But for the Doctor to gun someone down, a friend, even though he knew he'd probably regenerate; I don't think we've ever seen him go so far.

Good to see Maisie Williams used well again. She gave an astonishingly controlled and confident performance as the last woman in the Universe. By then, after trillions of years of life, she'd either be completely insane or, well, god. Also, that classic, white TARDIS interior, with the Doctor in a severe black coat. I had nostalgia for the sixties, and I wasn't even there. 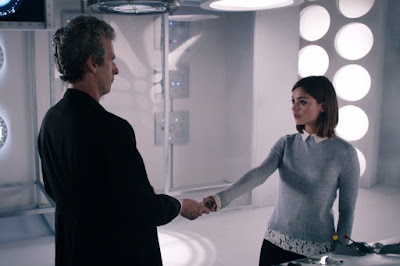 So, very Moffat, and the Moffat haters will, of course, hate it. And fair enough; if it's not your cup of tea, that's understandable. It was somehow overblown and undercooked at once, it made no sense whatsoever, but it was quite simply a wonderful experience and I imagine it'll be an episode I go back to again and again (unlike, say, Zygon ISIS, which although the best story of the year, isn't one I'll get a lot of rewatch value from). It ends with the Doctor picking up the pieces while Clara and Me/Ashildr travel the Universe together. Spot on.

Ooh, blimey, where to start. Basically, this episode follows on from The Day of the Doctor in which Gallifrey was squirrelled away somewhere in the universe (actually said to be "a parallel pocket universe," but I guess the Doctor wasn't as thorough as he thought). That episode is where we first saw the General, who gave the Doctor the go-ahead to save Gallifrey by hiding it. It was seemingly also he who spoke through the rift to the Doctor in The Time of the Doctor, when the Time Lords gave the Doctor a bunch of extra regenerations.

Rassilon, on the other hand, was last seen in David Tennant's last story, The End of Time, played by Timothy Dalton and getting into a zapping fight with John Simm's Master. Clearly, this ended badly for both of them, since they're both in new bodies the next time we see them. Rassilon was going to end the universe in that episode, but this goes unmentioned here. He refers to himself as "Rassilon the Resurrected," so he really is the same guy who founded Time Lord society and went to sleep in a tomb for millions of years.

The Doctor goes back to his old barn here, the place he ran to hide as a kid as seen in Listen, and where the War Doctor took the Moment in The Day of the Doctor. Looks like the old lady who meets him is his guardian from way back when, although it's left open. Quite why anyone would build a barn in the middle of a desert is anyone's guess.

The Cloister Wars were mentioned in the season opener, The Magician's Apprentice, and have left behind various captive monsters seen here. Possibly this is related to the Death Zone seen in The Five Doctors, which was filled with beasties by bored Time Lords back in the old times. The Deadly Assassin is also a big influence here, having introduced the Time Lord Matrix and the catacombs beneath the Capitol. It also introduced the big-collared style of Time Lord robes, and had the first mention of Shobogans, some kind of Gallifreyan underclass.

What else? Four knocks refers to Ten's last moments, of course, when Wilf got him irradiated. The diner that Clara and Me's TARDIS is disguised as is the one from The Impossible Astronaut, which is odd, since neither of them was present for that adventure (well, as far as we know - maybe it was Clara's TARDIS all along). Watching it spin away through space, it's surely also got to be a homage to the iconic final visual of classic series Sapphire & Steel.