It's been nearly two years, but now the popular web fanzine Whotopia is back with its 28th issue. In this very Masterly issue, I provide the first article in a series called "Master Who," examining each incarnation of the villainous Time Lord in the same vein as my "Doctor by Doctor" articles from 2013. David P. May also provides an insight into the villain's schemes in "Master of Disaster," and also takes a look at the underappreciated first Doctor serial The Keys of Marinus. There's also new fanfic from Michael Baxter, a look at third Doctor story Carnival of Monsters and Bob Furnell explores some of the unmade scripts for the fifth Doctor. Click below to go straight to the issue. 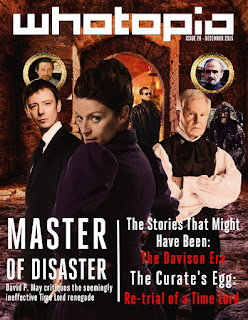 Email ThisBlogThis!Share to TwitterShare to FacebookShare to Pinterest
Labels: Doctor Who, fanzines, The Master