WHO REVIEW: The War Doctor: Only the Monstrous 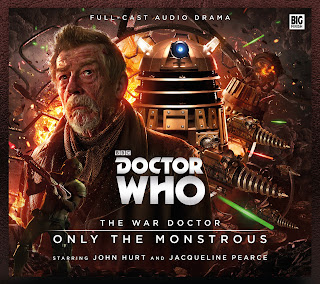 THE HEART OF THE BATTLE


Big Finish isn't being coy about having gained the rights to the new series properties, storming straight in with something quite momentous: the very first Time War boxed set. We all thought this would happen someday, but we expected Paul McGann's Doctor to continue his long-standing audio career into the Time War era. 2013, though, introduced the previously unknown War Doctor to unsuspecting fans, changing the landscape for the War altogether and giving us our first glimpses of how it was actually fought. And so, Big Finish manages a tremendous coup and gets Sir John bloody Hurt back to play the lead in this new batch of audio adventures.

It's perhaps impossible to ever truly tell the story of the Time War, spreading temporal chaos across the Universe and leaving cause and effect in ruins. However, there were clearly some more physical, worldly battles in the great temporal conflict, with Dalek fleets and gunships encroaching on each others' worlds. Nicholas Briggs takes a wise approach with his take on the Time War, joining the conflict after a decisive battle has left the Daleks devastated, and following it up with a story based on the planet Keska. The Doctor - sorry, John Smith - first finds Keska as a beautiful, peaceful place, only to be summoned away, and returns to it in the iron grip of the militant Talians. What to us would be a gargantuan catastrophe - the conquest of an entire civilisation - is but a tiny, proxy war for the Time Lords and Daleks. It's a fine way to explore such a gigantic conflict; the Time War in microcosm.

John Hurt is as brilliant as expected, his unmistakable voice perfectly suited to audio drama. The story is fundamentally melodrama and Hurt isn't afraid to occasionally go over the top, and there's some speechifying, but it fits the character and the story perfectly. This is never anything less than gorgeous to listen to. Also excellent is Lucy Briggs-Owen, who plays the young Keskan woman Rejoice, a character who's such perfect companion material that it's heartbreaking when the Doctor, in spite of his fondness for her, pushes her away. He meets her again, later, played now by Carolyn Seymour, bringing gravity, world-wearniness and maturity to what is still recognisably the same character. As above, so below; Rejoice's journey reflects the Doctor's as the war on Keska reflects the Time War.

By the third chapter, the Daleks and Time Lords are openly at odds on Keska, with one group of Time Lords attempting to forge a peace with the Skaroene monsters. At odds with his usual character, the Doctor dismisses any idea of truce or appeasement, having been fully turned to the cause of war. For all this, though, the War Doctor remains recognisably the Doctor, still fundamentally decent and heroic. He may be jaded, self-flagellating and war-weary, but there's still very little there that suggests an incarnation shunned by his other selves. This is a fine first step in the dramatisation of the Time War, but I hope that in the future we get to see the Doctor truly show us just what he had to do in order to win the War.
Posted by Daniel Tessier at 19:59