Firstly, let's just get it out there: Batman v Superman isn't very good. I don't think there's going to be any argument there. Personally, I didn't think it was as terrible as many people are saying. I found a lot to enjoy. But having criticism dominated by whether a production is very bad or merely quite bad is not a desirable position for any production to be in. Naturally, the movie will make a ton of money, because it's a major event: the first time ever that the two most recognisable superheroes in pop culture have come together, in live action, on the big screen. Which is more to the point. Batman and Superman deserve better than this for their first proper cinematic outing together.

There's a lot here I'm on board with. Surprisingly, I really rate Ben Affleck as Batman. I was as dubious as anyone when that casting was first announced, but it works for this take on the Caped Crusader. Batman can, and has, been many things over the years, and it's interesting to see something a little different to previous cinematic versions. Joining Bruce Wayne years into his career as Batman, embittered and resigned to this endless fight, offers plenty of potential for interesting storytelling. There's no way of getting around it, this version of Batman is trigger-happy and genuinely psychotic, but the glimpses we have of his past - post-Joker, post-Robin - give us tantalising hints as to how he became such. I love the conceit of having Superman be the new guy, crashing into Batman's world and upsetting the balance of his worldview. There's a satisfying strangeness in hearing Bruce Wayne call Clark Kent "son."

I'm also one of the few who liked Man of Steel. I get what Zack Snyder wants to do, by exploring Superman as the modern America, representing the potential of great good, against the danger of unfettered power and collateral damage. I see what he's exploring. Batman and Lex Luthor both have a point here. Superman is potentially the most dangerous being in the world and the desire to keep him in check, to have safeguards against him, makes sense. We know he's a hero, but he has to earn that place in the fictional world. There are better ways of exploring this, though. Nobody communicates in this film. There's barely a line of dialogue between Bruce and Clark that hasn't already been heard in the trailers. There's never any particularly clear reason why Clark is so determined to stop Batman, and there's the overwhelming sense that if the characters just spoke they would actually cut to the chase and sort this out by the halfway point. Despite having a ton of things to cover, both in itself and to set up DC's new cinematic franchise, Batman v Superman is overlong. The first half hour is, simply put, dull, and this has a massively negative effect on the film as a whole. It never quite recovers from the trawl through the first act, so even once it gets going, there's a lot of good will lost. 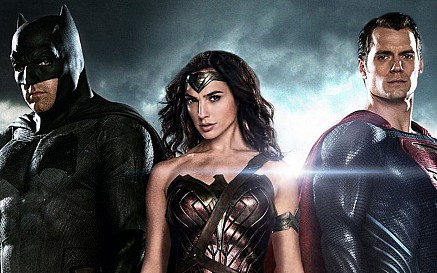 While Affleck impresses, Henry Cavill doesn't get to do much as Superman except scowl. OK, neither does Affleck, but dramatic scowling is Batman's thing. I enjoyed Cavill's performance in Man of Steel, but he has little to work with here. I've only good things to say about Amy Adams, Laurence Fishburne and Jeremy Irons - whose Alfred reinvents the character as Q to Bruce's Bond - but the standout is Gal Gadot as Diana Prince/Wonderwoman. Casting a talented actress who has been both a model and a soldier in her career is perhaps the perfect decision for Wonder Woman, and Gadot is very easily the best thing about this movie. Admittedly, for a large part of the film she mostly gets to smolder in provocative dresses - for the same reason that Amy Adams has one of her major scenes naked in the bath - but she has a powerful presence whenever she's on screen.

On the other hand, we have Jesse Eisenberg as Lex Luthor. I tried to keep an open mind about this one, but it really is the worst case of miscasting I've seen in a long time. It's not purely the actor who's wrong, the entire conception of the character is a mistake. There's not a thing here that recollects Lex Luthor in the comics or any previous iteration. The eccentric, babbling youngster is more like the Riddler, and having the Riddler almost bring down Superman is as poor as it sounds. This Lex is driven by daddy issues, and I can only assume that in this universe the real Luthor is dead and this is his brat offspring. At least he seems to be having fun, which is more than you can say for anyone else in this movie. There's some good material to be had from his interactions with Holly Hunter's Senator Finch, but god, that poor woman has to deliver some of the worst dialogue in recent memory. It's as if the script is trying to sabotage her performance.

Which is a shame, because - CG overload accepted - once the battle finally hits, the film goes into melodramatic overdrive. The fight between Batman and Superman is just as dramatically over-the-top as we'd hope, and, once it twists into the battle against Doomsday and brings Wonder Woman into the mix, it's spectacular. Lex's back-up plan, resurrecting Zod as a malformed killing machine, would have been a great surprise if it hadn't already been revealed in the trailers, but it still works. I'm all up for three heroes fighting a monster, and for me, this is what it's all about. Operatic and ludicrous, like a superhero fight should be.

So, while I found much to enjoy, it's too little to save the film. When looking at the films of both Batman and Superman in the colour era, Batman v Superman is probably the second weakest of each run (I've leave it to you to guess which of each hero's movies I think is worse). The biggest problem is how joyless it all is. I'm not averse to dark and issue-driven takes on popular heroes, and these kinds of productions can work. Jessica Jones is dark. Daredevil is dark. But they both have room to have fun and entertain. While I might question the wisdom of producing a Batman/Superman film that's unsuitable for kids, I can see why it's been done. However, it can, and should, be fun.
Posted by Daniel Tessier at 20:26