Big Finish have begun to listen to the overt requests from fans when planning their Doctor Who releases. This isn't necessarily a great idea, since fans like me can come up with truly terrible ideas, but I'm pleased that we're getting a "Two Masters" story, and a return for the David Warner incarnation of the Doctor, both requests I added my voice to. And then there's this: perhaps the most obvious choice for a novel adaptation, and one that I, among other fans, have suggested.

Big Finish have already adapted several of the New and Missing Adventures, the popular Doctor Who novels released by Virgin Books in the nineties. They also have a successful range of Sherlock Holmes adventures, starring (Big Finish top bod) Nick Briggs as the great detective. So All-Consuming Fire, Andy Lane's excellent Doctor Who/Sherlock Holmes/Cthulhu mythos crossover is an obvious choice. 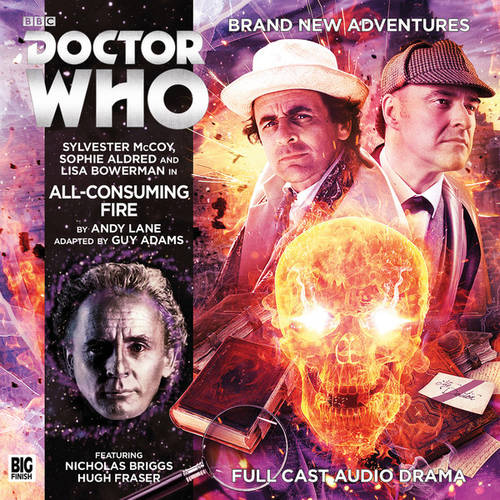 The original novel was split into three sections, each with a different setting. The first sees Holmes and Watson in their natural environment of smog-bound London, assigned a mission of vital importance by none other than the Pope himself. The second sets them further afield, into India, where the otherworldly elements of the plot become more overt. Finally, they travel through a rift in space to another planet in another dimension entirely, in full-on science fantasy territory. The adaptation follows this quite solidly, with two episodes set in London, followed by an episode each in the subcontinent and the alien realm.

I like that the audioplay opens with BF's marvellous Holmes theme, introducing the setting through the words of Richard Earl's perfectly cast John Watson. It's only then that the late eighties Who theme rolls out, juxtaposing with the Victorian setting in a suitably weird way. Both Briggs and Earl are on fine form, and the guest cast - which includes the wonderful Hugh "Captain Hastings" Frazer as Sherringford Holmes - are uniformly good. The third episode brings focus onto Bernice Summerfield, the Doctor's hard-drinking archaeologist companion, who is now so completely inhabited by Lisa Bowerman that there doesn't seem to be anything else to say on the matter. She's spot on. Her rapport with Earl's Watson is one of the highlights of the story.

The original novel, although very good indeed, loses its way somewhat in its final section, with Lane seeming more comfortable writing the Victoriana than the sci-fi stuff. (He's actually written many Doctor Who stories, and while there's some peculiar stuff in there, his period writing is generally his best. Indeed, he's since gone on to become the author of the Young Sherlock Holmes novel series.) Part of this is down to the focus on Ace. I never much enjoyed reading "new Ace," the hard-bitten space marine, and I don't much enjoy hearing her either. One of the strengths of the novel, though, was the intelligent examination of Holmes. Within London, his abilities and knowledge are so finely honed that he is almost invincible; in India, he's out of his element but still remarkably capable. On another world entirely, however, he's almost adrift, his knowledge next to useless. This is mostly lost in the adaptation, and the story is less interesting for it.

On the whole, the adaptation is highly successful, and remains a very enjoyable adventure. The weakest element is, sadly, the Doctor himself. While it's a joy to hear the Doctor and Holmes squaring off and teaming up, Sylvester McCoy gives a weak performance that detracts from the fascinating version of his character the novel range developed. Nonetheless, I'm looking forward to hearing further adaptations of classic Doctor Who novels.
Posted by Daniel Tessier at 18:54