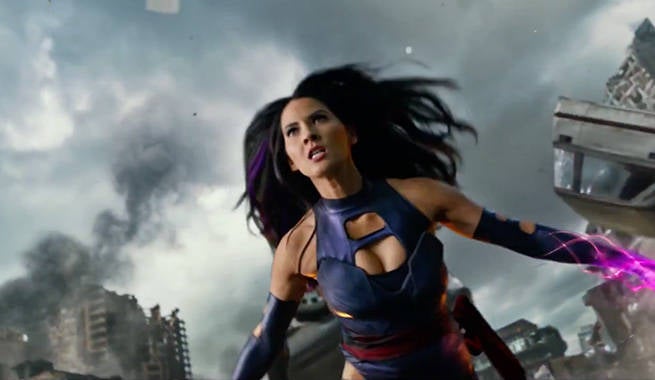 The latest mutant movie is garnering pretty mediocre reviews, but I, personally, thoroughly enjoyed it. I'm aware that a lot of my enjoyment is down to nostalgia. Although Apocalypse debuted in comics in the 1980s, the same period in which the film is set, the material that forms the basis for the story was explored in the '90s X-Men animated series, and feels inextricably tied up with this to me. Added to this is the quite remarkable realisation that the first X-Men movie was released a full sixteen years ago; almost exactly half my life. I even saw the two films in the same cinema, in front of the same screen and near enough the same seat. By the time Michael Fassbender and James MacAvoy, their characters finally having repaired their damaged friendship, parroted the lines spoken by Ian McKellen and Patrick Stewart at the end of their first appearance as Magneto and Professor X, I was becoming a little tearful.

So, I understand that my view of this film is clouded. I am not an objective critic. However, ignoring how a film makes me feel when reviewing it would be pointless. And so, despite its faults, I rather loved this movie. And there are faults. The pacing is odd, several sequences fall flat, there are still glaring errors in continuity that conflict with the previous instalments and Jubilee is utterly wasted - she doesn't even get a name in dialogue, let alone a chance to display her powers or make an impression. Yet there's so much here to enjoy. Bryan Singer remains the man to go to for X-Men movies, and anyone else taking the directors chair is going to have a hard job convincing me otherwise. The film increases in scope from its already spectacular opening sequence to become superhero disaster porn, but goes so far overboard, destroying so much so spectacularly, that it manages to be somehow beautiful in its excess.

Excess is the word. There's a huge cast of characters, all vying for attention, a massively over-the-top yet simplistic plot that incorporates already hyper-powerful individuals like Magneto and Storm becoming enhanced to frankly absurd levels. However, it's the quieter, more intimate moments that stick. Sweet moments with Nightcrawler (read: any moment with Nightcrawler), and Xavier reintroducing himself awkwardly to Moira MacTaggart. The most powerful moment part of the film involves Magneto, back in Poland having long since abandoned his mutant name. He gets ten years as a good man, before an instant of compassion reveals him for who and what he is and leads to horrific tragedy. Unlike the bombast of much of the movie, the tragedy of Magneto is played quietly and simply, and is powerfully affecting. And while Magneto dumps all of his humanity to become and out-an-out cartoon maniac, you feel such sympathy for him, for after everything he's had to endure, who can blame him for giving into his rage?

Fassbender and MacAvoy are as good as ever, with Nicholas Hoult and Jennifer Lawrence remaining fine as the Beast and Mystique, although making the latter more of a headline character doesn't work as well here as it did in (the still superior) Days of Future Past. The new cast make the biggest impressions though. Tye Sheridan and Kodie Smit-McPhee feel realer as Cyclops and Nightcrawler than James Marsden and Alan Cumming ever did, while Sophie Turner, as Jean Grey, blows Famke Janssen out of the water. She's a remarkably powerful presence, and her performances both here and on Game of Thrones promise great things for her future. All three, though, convince as being the younger versions of characters we've seen so much of before. Alexandra Shipp and Ben Hardy get less chance to make an impression as the younger versions of Storm and Angel (indeed, this version of Angel barely seems like the same character as the one we saw in The Last Stand, existing as an almost feral creature).

Every major character of the first three films has now been recast, with the exception of Wolverine, who is now pretty much impossible to imagine as being played by anyone other than Hugh Jackman, who delivers an impressive, and excessive, cameo. While the setting of the earlier films was left comfortably hazy, the distinct historical dates of the new trilogy do pose a problem with the cast that's carried over. The joke that everyone appears to have aged no more than five years in the twenty since First Class wears a little thin. Somehow, it seems most blatantly wrong with Quicksilver, who is utterly unchanged since Future Past and still playing Pac-Man in his mother's basement. Nonetheless, as with the previous film, Evan Peters is a highlight. Again, it's taken to excess, with Quicksilver stepping in at a moment of crisis and literally stopping the film for five minutes in order to be awesomely impressive.

Onto Apocalypse himself... well, he looks better in motion than he did in the stills we saw way back. There's no getting away that Oscar Isaac painted blue looks more like Ivan Ooze than the Apocalypse of the comics, but that's actually not the worst thing they could have done with him. Making the villain less ludicrously hench than the original is the only way forward, and Isaac brings a little sinister gravitas to what is, after all, a very cliched baddie role. Fan-pleasing elements like including Psylocke (in a totally impractical but comics accurate sex outfit), Weapon X and the Morlocks add little but raise a smile. Which is what it all comes down to, really. It might not be a great piece of cinema, but it made this fan smile a great deal.

Sexy-X: This is a very eye-candy heavy production, even if a surprising number of the stars are painted blue. Even the girl in the tie-in Sky TV advert is gorgeous.

Post-credits scene: The Essex Corporation! It's Mr Sinister! My favourite X-villain is being set up for Wolverine 3. 100 % that's who Richard E. Grant is playing.
Posted by Daniel Tessier at 20:55