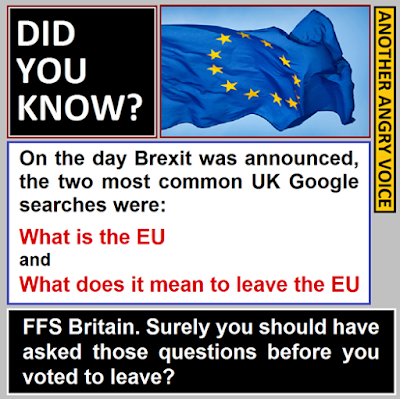 I think this says it all, really. The problem with a referendum is that every idiot gets a vote. The higher the turnout, the more idiots vote, it seems. How dare you vote on something you don't understand? Had these been the most popular searches the week before the vote, I would have been relieved. Instead, it happens afterwards, when it's too late.

There were several good reasons to vote to leave the EU. I disagreed with them, strongly, believing that we got a great deal more from the EU than we gave to it. A number of my friends voted to Leave; I felt they were wrong to do so, and still do now, but they had well considered reasons. However, there are undeniable truths to be learnt from analysis of the polls. Votes to Leave skewed heavily with increasing age. Asking younger people why they voted to Leave, and they tend to answer either that they thought it would be better for the economy, our influence or the NHS, or that they aren't really sure why. Asking older people why, they either say that they don't know why, or come out with some nonsense about "taking our country back" or "becoming independent," neither of which makes any kind of sense since we have been an independent sovereign state throughout our time in the EU.

Another trend evident from the polls is that people with better educations tended to vote Stay, while lesser educated people voted Leave. Again, that's not to say that everyone who voted to Leave is foolish, but there's a clear trend. People who voted to Leave, in general, simply do not understand what they have done. The number of people who have since expressed regret at their vote is telling, but it's too late. They should have questioned it before they voted, not after.

Generalisation is a dangerous and unfair thing, but the results are telling. The bulk of people who voted to Leave were older, clinging to an ideal of a Britain which never really existed. The worst I've heard is an idiot who skipped into my place of work, actually dancing with joy, because apparently his friends "died in the War for this." It's a level of idiocy and cultural distortion I cannot stand. WWII was a fight against fascism, that led to greater unity. The Brexit campaign was the opposite. In just the first weekend after the referendum, there has already been a marked increase in verbal abuse against immigrants and citizens of non-white backgrounds. Brexit supporters claimed that this was not a campaign of xenophobia and racism, when the evidence shows it clearly was. The worst kinds of people are already using our leaving as an excuse to let their vitriol run, 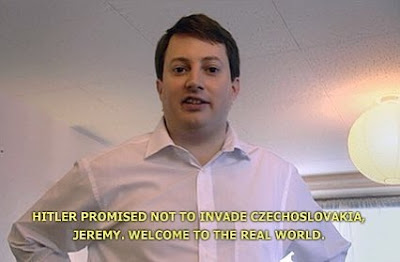 There's also the spectacular gullibility of the Brexit supporters. Farage, Hannan and the Boris promised to spend the money previously sent to the EU on the NHS; Farage retracted this immediately once the results were in. Racists and cowards who voted on the promise of a reduction of immigration have since heard from Hannan that this was never possible. People who fell for the idea that we'd have more to say in our trade agreements have since come had to accept the truth that, outside the EU, we'll have less of a say. While the scaremongering on the side of the Stay campaigners was appalling, it was better than the blind rhetoric of the Brexiters, lapping up the bile of the Murdoch press (media owned by an amoral financial tyrant who will see his fortunes improve with less EU control).

On the first day after the referendum, billions had been lost from the UK stock market. Banks were having crisis talks, having lost a quarter of their value overnight (I wonder how long I'll keep my job). The pound had dropped further against the dollar than anytime in the last thirty years. The UK has lost more money in one weekend than it spent on the EU in fifteen years. Our ability to control our destiny in Europe - a continent that we shall forever be part of - has been reduced by our blinkered decision to distance ourselves from it. There will be yet further cuts to try to cope with the fallout. Strong Leave-vote regions, such as Cornwall, are now campaigning to somehow have their EU grants retained. It's too late. You've told the EU to get lost, they aren't going to prop you up anymore.

While the debate was filled on both sides by scaremongering and rhetoric, one thing that continually came from financial experts was the promise of fiscal chaos if the vote went to Leave. Shock horror, they were right. Imagine that. But no, people didn't want to hear that, as a virulant strain of anti-intellectualism was spearheaded by the likes of Gove. The Murdoch press told us that a vote to Leave was a vote for democracy, and people believed, instead of actually looking at the facts and seeing that there is more power to voters when it comes to EU appointments. Now we can look forward to an unelected Prime Minister, most likely that vicious ball of fuzz, Boris Johnson. A man who never expected to win, who has no plan at all in place for how to take Britain into this new era. A man who changes his allegiance as easily as his socks. A man who is a notorious and outspoken homophobe (oh yes, the protection of LGBT people in the UK is also an EU law. I'm genuinely frightened for anyone who isn't white, British and straight).

Some people had good and considered reasons for voting to Leave. They were wrong. I don't blame them, I blame the blinkered, the gullible and the elderly who voted to destroy their own descendants' future. Maybe, after a decade of uncertainty and recession, things may stabilise and improve. Maybe England and Wales will sit alone, bankrupt and hate-filled, while Scotland and Northern Ireland take their chance to rejoin Europe and make something of their place in the world. Well done, everyone. You failed.