Having A Red Dwarf Organised Night

That was our team name. Unfortunately, the acronym does spell HARDON.

Last night, in my greatest quizzing performance since my team got an unprecedented perfect score at the Geekest Link Star Trek special, I attended a Red Dwarf quiz. Along with my lady Suz (the quotation queen), Nick and Steve (quizmasters themselves), I spent a fine evening at the Hope and Ruin public house. It was an excellent quiz, well structured, covering Red Dwarf series I to VI (with a bonus question on each series from VII to X. I wanted a question on series XII, because only I would have had a chance to get it right). There was a picture round, two sound rounds (classic next lines) and a full round for each series. It was also hilarious, with a wonderful turnout. The pub was packed, not a seat spare, and there were people who'd come from as far afield as Newcastle just for the quiz. Even a Czech stayed in the country for a few days longer in order to join in (Red Dwarf  is very popular in the former Czechslovakia). There were prizes for the best team name (a sugarpuff sandwich) and for last place (a pea on toast). Absolutely brilliant stuff. And we nailed it. 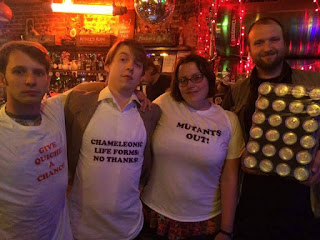 Props to Steve for coming up with that name.