In the musical episode, Dandy enrols in a space highschool in order to find a rare alien.

He's Dandy, Baby: He never went to high school. This probably has something to do with why he wants to go to Baberley Hills so badly, although it's more to do with his desperate attempts to chat up the girls (just how old is Dandy?) He has limited musical ability but levels up with a Rocky-styled montage. During the big sing-off, he sings about asses. Which is pretty much a sure thing for a chart-topper these days.

They're Sidekicks, Baby: Neither Meow nor QT get to do a great deal this episode. Meow kicks off the plot by following the Cliponian on Twitter. They later sneak into the school dressed as janitors.

It's Tech in Space, Baby: Baberley Hills exists in a biodome within a huge space station in orbit of a planet. It's security is provided by a gigantic android. In the school, the social order is determined by singing ability. There are plenty of other classes, though. One professor, who looks like the Fly, is experimenting with matter transmitters (he looks like the classic Fly, but his equipment is taken from the 1986 remake). The use of superpowers is forbidden on campus. The Cliponian: An extremely rare inhabitant of the planet Clip-on. Cliponians are humanoid but are distinguished by a plant that grows out of their heads, which only blooms when the Cliponian is in love. Dandy completely fails to realise that the Cliponian is his prom queen, Freckles. He thinks she's plain, until he realises she has booty. He's wrong. A geeky redhead with a killer ass? You should fight for that.

Baberley students: There are a lot of different life forms enrolled at Baberley Hills. The elite students are slim, elfin girls and huge, meat-handed jocks. Three jocks can morph together to become a gigantic green hulk (catchphrase: "Isaac smash!") The various aliens making up the crowd are almost Dadaist in their bizarre variety. One of them looks like a gigantic tapeworm, which is fairly unpleasant. Perhaps it can sing. More unpleasant is the plant creature that ejaculates something all over Dandy when he asks her/it to prom.

Brodo Asogian: One of the jocks is a hench version of ET. Which, by logical extension, means this is in the same universe as Star Wars.

There's Bad Guys Too, Baby: By this stage, Dr. Gel is basically stalking Dandy for its own sake.

Don't Quote Me, Baby: "Nobody puts Dandy in a corner!"

The Bottom Line, Baby: It's Glee in space, obviously, and while that might be fun if you're a Glee fan, it's otherwise a rather average musical episode. There's nothing wrong with a singsong, but the songs have to be good. Even the climactic number isn't anything special. Freckles looks cute in her prom dress.

Dandy goes fishing for a legendary catch on the planet Kayu.

He's Dandy, Baby: Determined to catch the Munagi fish, so he can rake in the moolah. Once he gets involved with fishing on Kayu, he becomes as competitive as he does about anything. He strips down to his underwear like the locals do on the water. He strikes up a friendship with a little local girl named Erssime who helps him look for the Munagi. Dandy dreams of mermaids.

He's Just a Little Obsolete, Baby: He's still seriously into his fishing, a rare bit of continuity between episodes (he got into fishing in "Nobody Knows the Chameleon Alien, Baby").

He's Not a Space Cat, Baby: Lazy bastard spends his time dicking about on his phone. He does, along with QT, help try to capture the Munagi. 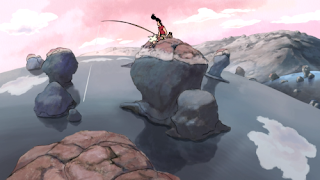 
Kayu: A wet mudball of a planet, surrounded by a reef of space kelp. It features such sights as exploding mud bubbles, mud-volcanoes, tsunami and giant octopodes. The planet has no moon. The humanoid natives spend most of their time fishing. Some of them wear snail masks as headgear, for some reason. Erssime lives with her grandfather, L'Delise (Elderly), who has been planning on catching the Munagi for years.

Rubini Comet: A huge blue comet that orbits close to Kayu once every 3600 years; the original home of the legendary Munagi.

The Munagi: a gigantic eel of a fish that lives deep beneath the waters of Kayu and never visits the surface. According to legend, it only surfaces when there is a blue moon - in fact, the approach of its homeworld, the Rubini Comet. The Munagi all flee in a huge plume of water and return to their home. The Munagi is on the Alien Registration Centre's Most Wanted list, valued at a sweet fifty million woolongs.

A sweet little episode, showing Dandy's surprisingly good rapport with kids against a fairytale backdrop. It's a straightforward but charming episode with more than a hint of Studio Ghibli to it.
Posted by Daniel Tessier at 16:12