Scarlet falls in with a handsome alien aristocrat; Dandy is having none of it. 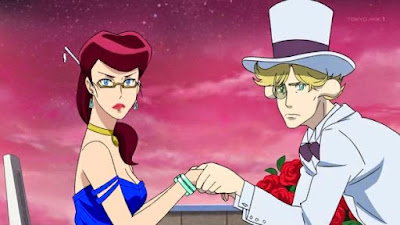 Cloudians: a rare humanoid species. A Cloudian generates a cloud around himself, comprised of all the memories and data he has accumulated during his travels. If a Cloudian should lose his cloud, it is considered shameful. Dandy and crew have been tracking a Cloudian for six months, only to stumble across him when he stops by to pick up Scarlet. Cloudian men are known to home in on sad, lonely women, show them a good time and then dump them. Sir Gentle Nobra, though, seems more genuine than that, and is truly looking for love. He's quite naive and old-fashioned, as well. A Cloudian's cloud reacts to their mood, displaying rain when they are sad and lightning when they are angry. Dandy tries an on-the-spot registration of Sir Gentle but Scarlet dismisses him; a Cloudian without his cloud is no Cloudian at all.

Ambienceans: disembodied entities that supposedly at a little atmosphere to a place. Sir Gentle bought two, named Atmo and Sphere, to cheer up his abode, but they just giggle and manifest as a living laugh track.

He's Dandy, Baby: After six months of tracking the Cloudian with no results, Dandy is skeletally thin from hunger, dehydrated and becoming erratic. He's lovelorn too, although how much of this is how he actually feels, and how much is his delirium is uncertain (he starts going on about how he is love). Meow he was less thrashed when he was a zombie, which is a very weird moment of continuity between episodes considering this can't possibly follow those events.

On planet C'est la Vie, Dandy refuses to look for rare aliens on the basis that he could ruin someone's romance by capturing their potential mate. He's galvanised to action when it becomes clear that Scarlet has gone off with a Cloudian. He doesn't seem jealous but cares enough about her not to want to see her used by him.

The Scarlet Woman, Baby: She's lonely and hasn't much of a lovelife. She considers herself overly suspicious because of her work. Convinced to go out with her coworkers, she has a pretty dreadful time until she's swept off her feet by Sir Gentle. However, she soon realises what he is and is too proud for his advances. She starts to warm to him again, and is girlishly thrilled at the prospect of Gentle and Dandy fighting over her, before they are sidelined by the rescue of Honey. She proceeds to get drunk with Meow. Her best friend at the ARC is a statuesque, curvy alien woman named Pine-Pine. 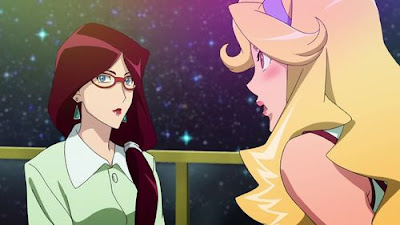 You're my Candy Girl, Baby:

Honey loves wrestling and biking. When she's not working at BooBies, she bikes across planets to go see her favourite wrestler, Misawa, and she's got some pretty mean moves herself. She's definitely not the airhead she appears to be; she's capable of outwitting Dr. Gel and fighting her way off his ship. When Gel tries to make a copy of Honey's brain in order to build up a database on Dandy, his equipment overloads due to insufficient capacity. It turns out that Honey is half-Cloudian. Her real name is Lady Nobra, and she's the half-sister of Sir Gentle. Although she could generate a cloud, she doesn't carry it with her (probably because she's smarter than him and knows people would be hunting her down for it).

He's Not a Space Cat, Baby: He's so hungry, he dreams of chicken wings. He is but one of several male characters in this episode who falls for Scarlet.

He's Just a Little Obsolete, Baby: A robot comes onto QT and he doesn't quite know what to do. He feels deeply sorry for Scarlet, realising how sad she must feel.

It's Tech in Space, Baby: Sir Gentle's ship is named the Edinburgh, and is a floating castle and courtyard in space, surrounded by the pink haze of his cloud. It has no weaponry or defences.

The Aloha Oe runs out of fuel due to the crew's cashflow problems, and has to be pedal powered by Meow.

Planet C'est la Vie: hosting a meet night/all-you-can-eat buffet, free for ladies only. Dandy and Meow talk their way in by demanding that they're women and that you shouldn't judge by appearances. (In the Japanese subs, Dandy actually says "Everyone has a fault or two," which could be a paraphrase from the end of Some Like it Hot.) A giant snail comes onto Pine-Pine; presumably, the snail got in for half price.

Honey goes biking across a desert planet with two suns. It just might be Tatooine.

There's Bad Guys Too, Baby: Dr. Gel kidnaps Honey in order to use her knowledge to capture Dandy. He's actually very apologetic and gentlemanly towards her, bearing her no ill will. Gel comes across as pretty decent, if a little naive. He falls for Honey, which she uses to her advantage, running rings round him and sending out an SOS, with him believing it's a trap for Dandy.

Admiral Perry summons the Seventh Fleet to capture Dandy, orders Honey's death and has no qualms about Gel being killed in the process. "Screw him!" are his exact words.

The Bottom Line, Baby: Scarlet-focused episodes are always good, and there aren't enough of them. This is the beginning of the rather sweet Scarlet/Dandy romance that will be followed up in episode 2-10, "Lovers are Trendy, Baby." Honey also gets some brilliant development, proving to be more than a match for the boys. The two characters complement each other nicely, with Scarlet showing her softer side and Honey her hardass side. The episode develops into a... love quadrilateral?.. and ends in a suitably action-packed and emotional climax.

He's Dandy, Baby: Dandy and Johnny meet in the gents. They're instant rivals but also firm friends; Dandy takes to Johnny when he sees that they both go to the Andromeda branch of the Naritasan Temple. They live in a constant cycle of bromance and violence. They immediately decide to form a band (the Dropkix), with Dandy as the singer and frontman, while Johnny is the songwriter and lead guitarist. Their first warm-up gig has three creatures in the audience, one of whom is the club's janitor, and involves one song played in a loop for two hours. It's obviously shit, but the fight that breaks out afterwards goes viral and leads to the Dropkix getting signed, leading to their headlining gig at the Space Budokan. 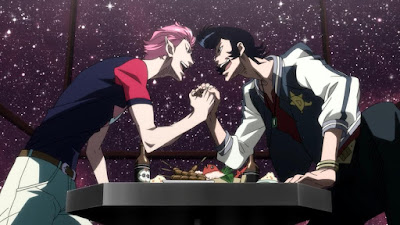 He's Johnny, Baby: Commander Johnny, the supreme military leader of the Jaicro Empire, is a handsome young humanoid with pinky-red hair and pointed ears. He is spectacularly rich and doted on by his soldiers and servants, but all he really wants to do is form a band and be a rock star. Before meeting Dandy, he's never eaten fries. He backs out of the Budokan gig the night before, bowing to his responsibilities as leader of the Jaicro. His personal flagship is a gigantic mecha with a lion's head (somewhere between Ideon and Voltron). Ultimately, he can't bring himself to miss the gig, and makes the universe's greatest entrance by landing his mecha on top of the Budokan. By choosing to make the gig rather than attack the Gogol Empire at their vulnerable point, Johnny averts a galactic total war.

Johnny's English voice is provided by frequent anime actor and musician Johnny Yong Bosch, who is considered by many to be Adam Westing in the role. Johnny looks more like David Bowie, acts like Gene Simmons and the Dropkix music sounds a little like The Police.

They're Sidekicks, Baby: QT and Meow don't get much limelight, either in the band or the episode, but they are the best musicians. They get weeks of practice in while Dandy and Johnny are dicking about. Meow plays bass while QT is on the drums.

The Jaicro: The Empire appears to be made up of various species, just like their enemies the Gogol. The creatures making up the fleet include slender, elfin humanoids, huge, hulking brutes and mushroom-headed creatures. The Jaicro have a spy in the Gogol fleet, who has informed them that the Gogol's ultimate weapon, the CORE, is ready for launch.

It's Tech in Space, Baby: The Gogol conduct trials with a dummy CORE made from plywood.

I Know This Planet, Baby: Dandy and Johnny hang out writing songs in a park, that takes up the bulk of an asteroid on the edge of the galaxy.

Let's Get Our Asses to BooBies, Baby: One of Dandy's main educational acts is, of course, taking Johnny to BooBies. This episode gets in some serious fanservice perving on Honey. It's Honey who comes up with Dropkix as the name for the band.

The Bottom Line, Baby: As the Narrator says, "How original." The main characters forming a band is a pretty dull idea, but is livened up by the rivalry/friendship between Dandy and Johnny. The episode becomes a little repetitive, although the ending is suitably climactic. So much of this episode revolves around Japanese pop culture that I can tell I'm missing tons of jokes and references, so maybe it plays better with more knowledge.
Posted by Daniel Tessier at 17:10