Season Two, Episode Eight - A World With No Sadness, Baby

In this unique and haunting episode, Dandy visits a world on the boundary between life and death. The episode begins with Dandy's body floating down a mysterious river, arcing up into the sky...

He's Dandy, Baby: Dandy wakes up in his funeral barge holding a mysterious cube. He has amnesia, with no idea where he is or how he got there. To begin with he is mostly concerned with finding something to eat, only realising later that he hasn't actually felt either hungry or tired since he arrived on the planet. Apart from a creepy old lady and her talking cat, very little in this world truly phases him; Dandy takes things in his stride much as he usually does.

Eventually it becomes clear that Dandy is dead and on a planet of ghosts, having been killed crashing into the main console of the Aloha Oe approaching the planet. He lacks a reflection and will never age or change. Given the choice between an existence without sadness or strife, and real life with the sadness that allows happiness to exist in relief, Dandy chooses life. After all, what's the point of existence without being able to enjoy food or boobs?

Dandy speaks to the spirit of the planet (see below), but she is unable to send him back. However, she remarks that he is "The One," and is able to send him sideways, into a reality where he averted death, so that he may continue. She reveals she is in love with him, to which Dandy, with his usual modesty, expresses no surprise whatsoever. Someday, he returns to the planet to see her. 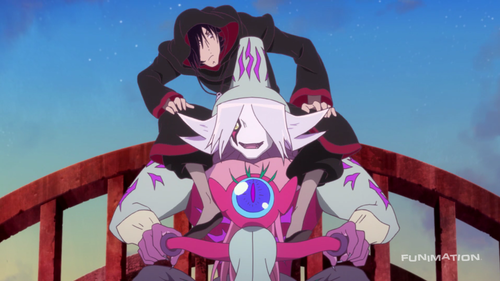 They're Sidekicks, Baby: With Dandy alone in Limbo for most of the episode, we hardly see Meow and QT. We see in flashback that the three of them approached the planet hunting the rarest of rare aliens. Neither of Dandy's friends would even notice if he died straight away - they'd just think he was asleep. Meow suffers from "starvation hairballs."

I Know This Planet, Baby: The planet Limbo: a huge rock in space, protected from visitation by an impenetrable dark nebula. The Limbo world was once an ordinary planet, but its inhabitants wiped themselves out in a huge, stupid war, leaving only a world of ghosts behind. Now, lost souls from all over the universe gravitate towards the planet. It's a weird place, with buildings open to the air, chandeliers hanging from the sky, and a cable car that carries souls to the heavens. Once lost souls accept that they are dead, they are able to pass onto the next world, although many of them choose to remain to help new arrivals. Souls tend to go through the motions, still trying to eat and sleep, before accepting their new existence. The food on the planet includes ramen that evaporates into dust, and living candies.

The spirit of the planet manifests in multiple forms. The Curiosity of Limbo is personified as an angelic young girl, who has existed in isolation for aeons, the only truly living being in a world of ghosts. The Logic of Limbo manifests as the Night Porters, a swarm of flying, jellyfish-like creatures, led by a frightening being with no face, but an eye on one hand and mouth on the other (kind of like the Angel of Death in Pan's Labyrinth).

The Alien Registry records that Limbo holds no life, but QT detects something, leading the team to believe whatever's down there must be ultra-rare. 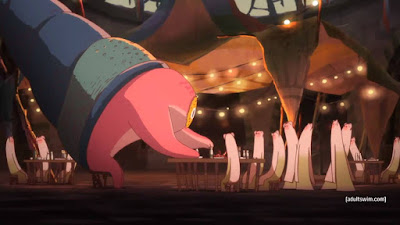 We're Alien Hunters, Baby: Limbo is populated by some very strange creatures, including a pink motorcycle that is actually a spirit; huge, snatching bird-creatures; and a vast snail-like creature with a single eye, that leads a choir of worm-like things. There are a Lord and Lady on the planet, probably unaware that they are dead; he has a crocodile's face, while she has a china mask hiding a body comprised of tentacles. Dandy's guide on the planet is Ferdinand, a hulking, ogre-like being who keeps Dandy safe by enveloping him in his torso.

It's Tech in Space, Baby: The cube Dandy wakes up with is his own black box, containing the memories of his last moments of life.

The Aloha Oe has a broken radar. QT gets by as a pilot by looking out the window.

The Bottom Line, Baby: The last of Space Dandy's surrealist episodes, this is bizarre and beautiful. Although other episodes play with tone and content in the series, no others stray so far from the series' usual vibrant, colourful style. Even Dandy is more contemplative than we'll ever find him again, ruminating on the necessity of sadness and hardship in life. Curiosity's offer to shift Dandy between dimensions, and his identity as "The One," is a huge revelation as to his true nature, which will pay off in the finale. Dandy could have died and returned to life via another timeline many, many times, offering a way to make sense of the series' baffling and contradictory continuity. The story comes together, a piece at a time.

Dandy gets hired to pose as an alien Dancinean, and gets himself involved in a dance-off with the real thing - or so he thinks...

I Know This Planet, Baby: The planet Grease is more likely a moon, orbiting a large, jovian world called Anata 5.  It's a desolate planetoid, inhabited by the remnants of a humanoid civilisation (Greaks?) It was once home to the Dancingeans, holding the Dancingean Space Festival once a century - grand prize for the dance-off, 700 million woolongs. However, the flyer Dandy finds is five hundred years old - there hasn't been a festival for so long that no one even remembers the long gone Dancingeans, except for one snotty old lady who's been in a coma for three hundred years. Her son hires Dandy to pose a Dancingean in order to revive the festival, and revamp Grease's fortunes. 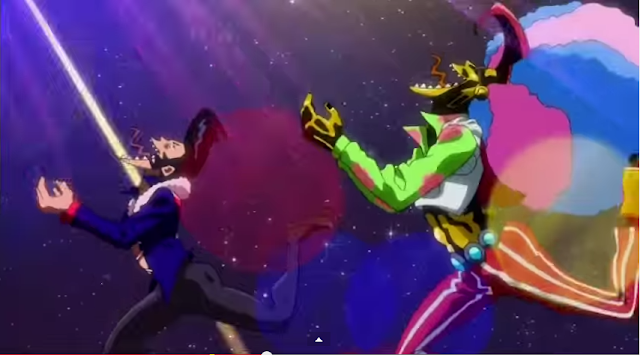 He's Dandy, Baby: Dandy has a booty built for dancing. He's the greatest dancer to arrive on Grease in living memory, until Ton Jravolta turns up. Dandy immediately decides to prove his dancing ability against the supposed Dancingean. Dandy is bribed into posing as the Dancingean with an Agnes Lum pin-up maagazine (I can't blame him for going for it).

Ton Jravolta: a golden humanoid who descends from the heavens on a spinning ring ship, claiming to be the last of the Dancingeans. He sure can dance though.

The Dancingeans: the real Dancingeans are colonies of space lichen, that, once revived, manifest into revolving rings that have the power to distort time and space. They've lain dormant for five centuries, waiting.

There's Bad Guys Too, Baby: Dr. Gel and Bea come close to locating and capturing Dandy in this episode, but they have begun to question their role in pursuing him across the cosmos. They are cleansed by the beauty and temporal energies of the Dancingeans. 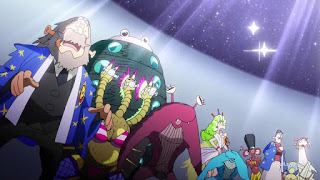 Phenomenology, Baby: The Dancingeans dance to an extradimensional record, which accelerates the passage of time, whithering Dandy and Jravolta to old men, who keep, dangerously, dancing. Playing the record backwards reverses the flow of time, reverting them to youth, although it goes back further than intended and leaves them as babies. The Dancingeans' power reacts with the Pyonium energy within Dandy, creating a temporal explosion that causes the birth of a new planet, also called Grease, starting the cycle anew. Dandy is reborn, in orbit, as a star-child - still dancing.

The Bottom Line, Baby: One of the less absorbing episodes. The scrappy art style makes it a little different to those around it, but the dance off gets a little dull and the time effects aren't very original. The nature of the Dancingeans, and the world-shaking climax, are pretty cool though, ending the episode in a bizarre combination of 2001 and Saturday Night Fever.