Having had considerable success with their previous pilot season, which kicked off the acclaimed series The Man in the High Castle, Amazon have pushed ahead with three new pilots. I can't say I have any interest in watching Jean Claude van Johnson or I Love Dick, but I couldn't resist watching the latest TV version of The Tick.

I was a fan of the animated series back in the 90s, and while the 2001 live action series passed me by, I have fond memories of the blue-suited superhero, whose adventures occupied the same strange televisual space as Earthworm Jim, Johnny Bravo and Rocko's Modern Life. Today's pop environment is arguably perfect for a new Tick series; the influx of superhero properties are asking for a parody. On the other hand, though, you might say we've already had that parody, with Deadpool, Guardians of the Galaxy, KickAss et al all gleefully ripping the piss out of themselves while making for highly enjoyable adventures in their own right. The Tick might just be a little too obvious and silly to really hold up in this company. 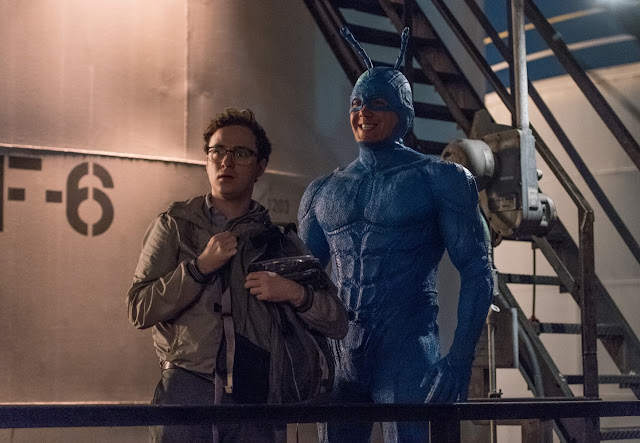 So it makes sense that Ben Edlund has taken a more high concept direction for this version of his superhero. At a mere thirty minutes long, this is a very brief but effective introduction to a superhero-infused world, where an ersatz Superman has been protecting citizens since the early 20th century, and supervillains have, supposedly, been vanquished. The new version of The Tick riffs on the paranoia and mistrust of our age, questioning the reality we are presented with. Griffin Newman plays Arthur, the Tick's traditional sidekick, here presented a schizophrenic whose childhood encounter with supervillain The Terror has left him unable to trust the world around him. Jackie Earl Hayley, top choice for disturbing comicbook villains today after his recent role in Preacher, is suitably horrible as The Terror, the supposedly dead villain who Arthur is convinced secretly runs the city of Midtown.

We see there are criminal gangs trading in super-tech and weaponry, but beyond that, how much of Arthur's theories is based in reality we don't know. We don't even know if the Tick is real. He faces down criminals, causes a huge explosion and generally leaves a trail of destruction in is wake. He's even backed up by an eye-witness account... yet outside of his villain battle, he interacts only with Arthur. Arthur, whose mental difficulties are accompanied by a pronounced facial tick, and who is obsessed with superhero and villain activity. Is he some aspect of Arthur's personality, mad flesh? The "you you want to be?"

The best thing about this, though, is definitely the Tick himself. Peter Serafinowicz was born for this role, imbuing the Tick's ludicrous speeches with a cocksure swagger and a majestic oration. There are some lines where he gives a dead-on Adam West impression, while in others he just sounds like a bellowing lunatic. There are some choice lines on offer: "You fingered foul fruit, friend," is a favourite, but I feel "Evil wears every possible mitten," is a cut above.

The episode is clearly the work of people who love what they're doing. As well as Tick creator Edlund, current hero Serafinowicz and former Tick Patrick Warburton are listed as producers. These are people who love the character and want him back on our screens. Based on this episode, I'm with them. As a pilot, though, it's fairly weak. Half an hour is just right for an installment of this show, but the pilot needs to be longer to set up the premise a little more clearly. As it is, it rather just stops, and fluffs its cliffhanger. Hopefully, the cleverness, silliness and bombastic fun will garner enough positive feedback to assure a series. I want to see how if this develops into something genuinely original.

I also want to hear the Tick shout "SPOOOON!"

Email ThisBlogThis!Share to TwitterShare to FacebookShare to Pinterest
Labels: reviews, The Tick