Red Dwarf XII continues with another episode full of clever ideas. Doug Naylor seems to have been the more sci-fi-oriented of the Grant Naylor pair, going by his solo work since they split (the oddity of Series VIII notwithstanding). "Samsara" continues to show Naylor's strength as an ideas man, with an ingenious central conceit that leads to some laugh-out-loud moments.

The karma drive is explicitly based on the Justice Field from Series IV's "Justice," but is an original and different enough idea to feel fresh. Indeed I doubt I would have even thought of "Justice" if Kryten hadn't specifically mentioned the technology of that episode. The idea of karmic retribution as a means of maintaining "moral order" on long missions is one that is clearly ripe for abuse, and the episode touches on this, but understandably the script focuses on the humour of the concept.

Although this is an episode with high concept sf at its heart, much of the runtime is taken up with very traditional, straightforward sitcom scenes. The opening scene, in which Rimmer and Lister play a game of "Mine-opoly," is a lengthy, simple and very funny string of bickering between the characters. Equally, aboard the SS Samsara we get a long conversation between Lister and the Cat, two characters who rarely get to interact at length without the others. The Cat's history lesson is hilarious, as much a throwback to the distorted Cat myths of Cloister the Stupid as it is a showcase for the Cat's bizarre idiocy. 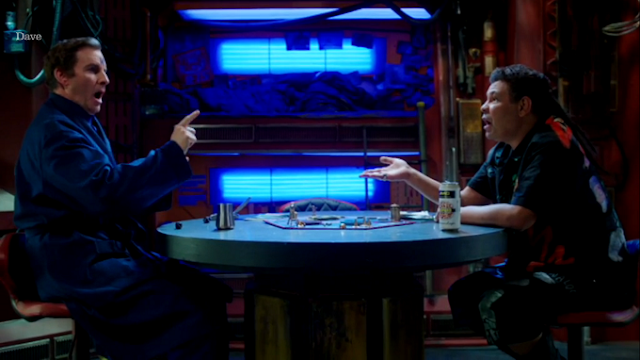 "Samsara" is an unusual episode structurally, less linear than is usual for Red Dwarf. Jumping back and forth between the SS Samsara's mission and the series' present, three million years or so later, almost half of the episode features the guest cast with none of the regulars present. Maggie Service and Dan Tetsell are pretty great as the illicit lovers aboard the Samsara, holding their own while the Dwarfers are out of sight. They make believable, if not particularly likeable, characters and hold their own well. In fact, their story is probably more interesting than what's happening to the Dwarfers in the future.

Both "Samsara" and "Twentica" showcase great ideas that lead to memorably funny scenes, but plotwise both have suffered from trying to do too much with too little time. More so than last week, the second episode simply stops, while there is clearly scope for more misadventures within the karmic field. It's enough to make me strongly hope for a fifth Red Dwarf novel, to allow Naylor to expand on, and make the most of, his ideas  and characters.

Title-Tattle: Samsara is a Sanskrit-derived word referring to the cycle of karmic reincarnation in Hinduism and Jainism.

Best Line: "Bam! Invents gravy!" (Somehow even better out of context.)
Posted by Daniel Tessier at 13:29