It's good to see that Star Trek Continues is continuing to continue. With Paramount coming down hard on fan productions, I expected this series to come to a halt. However, the guys behind Continues have confirmed that they plan to carry the series on to its conclusion, which is expected to bring it right up to the end of the five year mission, and the lead up to The Motion Picture. Given that, of all the fan series, Continues is the one that is designed to reproduce the original Star Trek the most closely, I can't imagine that Paramount will leave it alone for long.

The latest episode, "Embracing the Winds," shies away from hard sci-fi and and gives us some good, old-fashioned social commentary. It's very much in the style of the courthouse episodes of the original series, such as "The Menagerie" and "Court Martial." Much of the episode takes place at a Starfleet hearing, overseen by Captain Kirk (series overseer Vic Mignogna), Commodore Gray (Buck Rogers' Erin Gray, amking a return appearance to the series) and the Vulcan Vice Admiral Stomm (the classy Beau Billingsley, who previously appeared in Star Trek Into Darkness). The episode revolves around the fate of the USS Hood, a starship whose crew has been mysteriously killed. Looking to recrew the ship, Commodore Gray has to decide which of two commanders to promote to captain.

The choice comes down to Spock, (series regular Todd Haberkorn), who is torn between career progression and stayig aboard the Enterprise, and Commander Garrett (Clare Kramer, best known as Glory in Buffy), an officer with a turbulent career who believes she has been held down because of her gender. The story is preoccupied with the many kinds of discrimination and prejudgment that people (or at least, non-white, non-straight, non-male people) face in their lives. Spock is judged by both humans and Vulcans because of his mixed heritage, while Garrett faces questions due to her nature as an ambitious woman.

It's depressing to think that there might still be sexual discrimination in the 23rd century. I suspect that the starting point for the episode was an attempt to explain the sexist attitude of the final original series episode, "Turnabout Intruder," which notoriously implied that women couldn't be starship captains. Since Enterprise has since shown that female captains have been part of Starfleet since its beginnings (as noted in this episode), the script suggests that it is throwback Tellarite attitudes, and Starfleet attempts to appease the race, that have led to women being kept out of the captain's chair. It's contrived, but it works, and perhaps could be taken as a parallel for how traditionally conservative nations are struggling to fit into the global community. Primarily, though, this episode is concerned with America's ongoing problems with misogyny and sexism, something that is in discussion more and more. 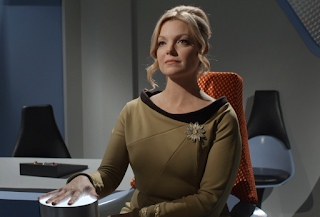 Clare Kramer is particularly good in the episode, making Garrett into a remarkable, if difficult to like, character. It's a testament to the strength of the script that we sympathise with Garrett and agree with her ideals, even while her personal flaws are apaprent. Meanwhile, the regular Enterprise crew engage in a mission to investigate the Hood, given the episode a more perilous B-story. It works well enough to keep things going, but the more interesting stuff is happening at the starbase, and the events on the Hood rather shut the story down and give Starfleet an easy way out of its dilemma. Nonetheless, this is a strong, thoughtful episode, with an important message. This is exactly what Star Trek should be doing; looking at today's issues through a futurist perspective.
Posted by Daniel Tessier at 16:07