Sarah Dollard has delivered a script that, when brought to life by some of the best acting and design we've seen on the series in years, has all the makings of a minor classic. Not an anniversary special, not a barn-storming finale, just a little, meat-and-potatoes episode that turned out to be something truly wonderful.

Firstly, there's a good, old-fashioned deductive adventure for the Doctor and his companion, working out just what those lights under the ice are. That back-to-basics approach of the first few episodes is working wonders for the season so far. The tried-and-tested formula of present-future-past for the new companion works, so it makes sense to bring it out again, with the new girl's reactions to the set-up being the newer element. The BBC is never better than when it's creating a period drama, and the production team excels in this episode. The frozen Thames is so believable, it's astonishing; a remarkable work of set design, backed up by a bustling crowd of extras in period dress. No one does this stuff better. The model work is also impressive - how many viewers realised that the Doctor who takes a swim was not Peter Capaldi, but a lifelike sculpture of him instead? Everyone's skills come together to make a truly effective setting.

I find some strange satisfaction in that the Doctor's detective work never actually gets as far as explaining what the creature under the ice actually is. He's far more concerned in the why's and the who's than the what-on-earths. We never find out whether the creature is alien or earthly, quite what its little piscine companions get out of their symbiotic deal or just how long the beast has been there. It's fun to speculate, but it's not important right now. It's not the point of the story.

Because, as with the frozen Thames, there's a lot more going on under the surface. This is a story about morality, and especially, exploitation, in its many forms. It's Bill's turn to question the Doctor's ethics, ethics that have been coded by millennia of experience and an alien viewpoint. It brings to mind episodes such as "The Fires of Pompeii," but it's better written than an argument about going against the flow of history. The Doctor doesn't give a damn about that here (in fact, he openly alters history without the least regret). It's far more like the fourth Doctor at his most alien, in Pyramids of Mars, brushing off the death of an individual because there isn't time for outrage. The Doctor's logic at the situation is faultless, but it's so... unpalatable to someone like Bill. It's also the first time, I think, that we've really focused on how a companion reacts to her first immediate encounter with death. Mostly, we've seen the difficult truth of confronting death when a companion has faced someone close to them: Rose and her father, Clara and Danny. Bill doesn't know young Spider for more than a few minutes, and yet his death is intimately and profoundly upsetting for her. It's a brutally realistic picture, and one that makes the Doctor's position more believable. Not as an alien, but as an old man who has seen (and caused) death time and again. It's someone from a cosy civilian life facing death alongside a soldier. 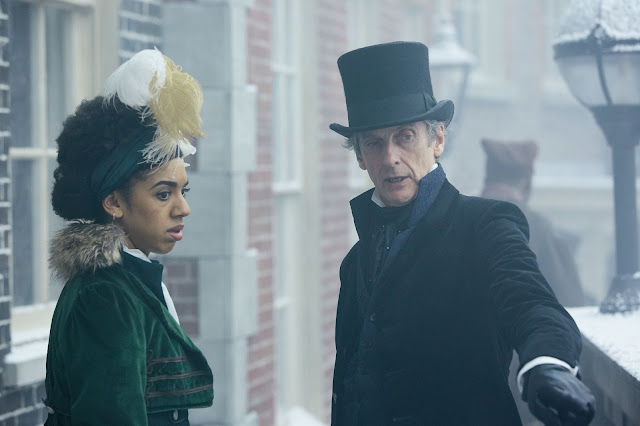 The episode flirts with the race issue when Bill first steps out onto the ice. Of course she's going to be worried about how people react to her. She'll have experienced so much shit from white people in the 21st century, let alone going into the 19th. (We don't have time to explore attitudes to her sexuality, which is a pity, but one 45-minute episode can't cover everything.) Again, it recalls an earlier episode. Martha's first trip in the TARDIS was to Shakespearean London, and she was similarly concerned. However, this time it's handled with so much more finesse. As much as I loved "The Shakespeare Code," I hated the Doctor's dismissal of Martha's concerns. "I'm not even human," and "Just act like you own the place." Very easy to say when you look and sound exactly like a white Englishman. The twelfth Doctor accepts Bill's concerns and admits it will be dangerous, but persuades her it's worth the risk if she wants to experience this life.

Of course, later on the script stops flirting with the issue and goes right for it, in what is, for me, the most triumphant scene in the series since "No sir, all thirteen!" After lecturing Bill on maintaining detachment and controlling her temper (Peter Capaldi lecturing on controlling your temper!) the Doctor smacks the bastard Lord Sutcliffe square in the mouth for his racist tirade against Bill. It's beautiful. (And anyone who wants to counter it with "But the Doctor's a pacifist!" I suggest you actually watch virtually any episode of the series broadcast since 1963 and question where you got that idea.)

From the punch, we move rapidly to that most powerful speech. There's been a lot of rubbish written about how the BBC has a "left wing bias," which I find bizarre considering its continual towing of the line under the Tory government. The writers of Doctor Who though, they're left wing, and this is the moment it comes to the fore. That fantastic, socialist, anti-elitist speech against Sutcliffe and his exploitative ways... it's what this series is made for. How old do you have to be before you can make a speech like that? You just need to be a 37-year-old Australian scriptwriter. Sarah Dollard should be bloody proud.

For this script is not about monsters, or fancy coats and top hats, or Regency colour. It's about exploitation, and how it drives industry and "progress." Exploitation of other races, of children, of the poor, and yes, of animals, be they real creatures or a fabulous sea monster. An absolute triumph.


Links: "I've come here a few times," says the Doctor, and he's not lying. The Doctor has visited the Frost Fair on a number of occasions throughout his lives. The twelfth Doctor offered to take Clara there in season eight's "The Caretaker,"making good on the offer in the same year's novel Silhouette, although this involved a non-existent fair of the late 19th century. Although there have been big freezes as recently as 1963, the Thames hasn't frozen over fully in London since the 1814 fair seen in the episode. Another Frost Fair visited by the Doctor is one of the greats, in 1648, patronised by the second Doctor, Ben, Polly and Jamie in the 1997 novel The Roundheads.

The Last Great Frost Fair has been visited by no fewer than four versions of the Doctor: the first Doctor, in the first Companion Chronicles audio, Frostfire; the tenth, in the online short story "The Frozen;" the eleventh, who took River Song there along with Stevie Wonder ("but you must never tell him,") and now the twelfth. This means there are three other Doctors running around somewhere up the river during this very episode, with Twelve presumably being very careful not to bump into himself. These stories have now given us three separate explanations for the big freeze.

The Frost Fairs were a result of the Little Ice Age, a nebulously-defined period of cooling experienced across Europe, which followed the Middle Ages and lasted until the 19th century. While several explanations have been proposed, variation in solar activity are commonly seen as a major cause. The increasing temperatures caused by the industrialisation of Britain in the 19th century almost certainly had a role in ending the Little Ice Age as well.

Sci-fi savvy Bill initially thinks she and the Doctor have travelled to a parallel world. The Doctor has, of course, visited a number of these, most notably in the 1970 serial Inferno and the 2006 Cyberman episodes, beginning with "Rise of the Cybermen." There have also been cycles of alternative history stories in the novels, both in the New Adventures and BBC Eighth Doctor Adventures.

"I preferred it when you were alien.

"Well, that would explain the lack of humanity. What makes you so sure that your life is worth more than those people out there on the ice? Is it the money? The accident of birth, that puts you inside this big, fancy house?