You can't handcuff the wind
If you try, you're going to fail
It's like trying to put thunder in jail

Mindhorn is a film about the mistaking fiction for reality. To begin with, it posits that the legendary Isle of Man, home to cats with no tails and corporal punishment, is a real place, even going as far to claim that is was made by the Isle of Man Film company. What absurdity. Next they'll expect us to believe that there really was a successful 1980s detective series called Mindhorn, starring one Richard Thorncroft, as a man who can “literally see truth.”

One person who thinks Mindhorn is real is Paul Melly, a disturbed young man who became obsessed with the series after seeing his parents killed as a child. Now the main suspect in a murder investigation, Melly insists he'll only speak to Detective Mindhorn. Thus, the Isle of Man police force is given no choice but to bring washed-up actor Thorncroft out of his sad life and back to the island, to be Mindhorn once more.

Mindhorn, the film and the fictitious series, is a tribute to two beloved TV genres: the provincial British detective series, most obviously the Jersey-set Bergerac (1981-91), and the OTT, technologically-enhanced American adventure series, such as The Six Million Dollar Man (1974-78) and Knight Rider (1982-86). It's the sort of series that plausibly could have existed in the early eighties, lovingly recreated by the film's creators for a host of clips, interviews, crappy tie-in merchandise and a fantastic music video. 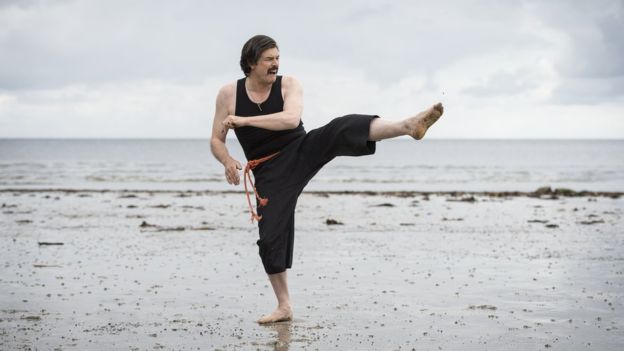 The murder mystery makes up one strand of the film's plot, but it's mostly concerned with the trials and commiserations of Thorncroft. Julian Barratt is perfect as the hopeless and hammy actor, desperately clinging onto his lost fame after foolhardily fucking off to Hollywood after three seasons of Mindhorn. Equally brilliant is the much underrated Simon Farnaby, who co-wrote the script with Barratt, playing Thorncroft's stunt double Clive, one of his many cuckholds. Melly is played by the ever excellent Russell Tovey, as the most sympathetic lunatic I've seen in a long time, clinging onto his love of Mindhorn because reality is too much.

Steve Coogan (who is listed as exec. producer along with the likes of Ridley Scott!) plays Peter Eastman, Thorncroft's main rival, a complete arsehole who has spent the last few decades living off the success of his far better spin-off series. The magnetic Andrea Riseborough plays DC Baines, the officer heading the case, while Essie Davies plays Patricia, Thorncroft's one true love and the most sane and normal person in the whole ensemble.


Mindhorn is an absolutely brilliant, very British comedy, with Barratt making the most of some spectacular lines, and as the plot kicks into high gear in the final act, showing that he really does have the makings of an action hero (if you squint and run him in slo-mo). With something of the feel of Alan Partridge: Alpha Papa and some of the aesthetic of The Mighty Boosh, this is is a fantastic love letter to risible TV shows, overzealous fandom and dreadful, dreadful actors.
Posted by Daniel Tessier at 12:23